I’ll have more to say about this later, but for now, here’s the link to the conference where Jim Webb is/was speaking today. Also, check out the tweets below about Webb’s speech. I was wondering when he’d pop up again, given that he’s been silent for many months now – literally not a word on his Facebook or Twitter pages, in the media, etc.

P.S. I actually hope that Webb DOES end up in Trump’s cabinet, maybe as Secretary of Defense or Secretary of State, as no matter what else he is, the fact is that he’s super-smart and knowledgeable about national security, foreign policy, etc. He’d also be INFINITELY better than Giuliani or any of the other horror shows I’ve heard mentioned so far. 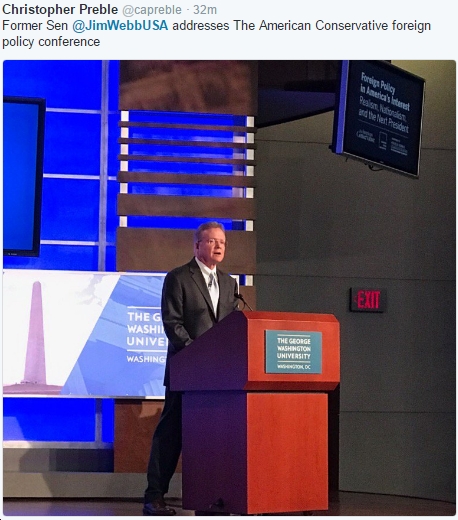 @jonward11 Webb never answered the question about whether he’d consider serving in Trump admin
@jonward11 Random questioner says there’s a rumor going around that Webb IS being considered for SecDef, asks Webb if he’d do it. Webb filibusters
@jonward11 Webb won’t say who he voted for. “My vote is my business. This is America.”

@jonward11 Lot of Webb’s talking points match up quite well with objections to Bolton made by Rand Paul today
@jonward11 Webb says UVA/Jefferson “is sort of orwellian to me … you can’t constantly reinvent your history to reshape it for the issues today.”
jonward11 Webb now hammering affirmative action, saying poor whites in Appalachia are not wrong to see this as “reverse discrimination”
@jonward11 Jim Webb: “I would like to salute Donald Trump for his tenacity and for the uniqueness of his campaign.”
@jonward11 And when you think about it, Jim Webb makaes a helluva lot more sense than Giuliani for SecDef
@jonward11 – “Jim Webb is speaking at GW now. Man who introduces him says Trump should pick Webb as SecDef or Sec of State”