Two statements by now President-elect Donald Trump, two examples of why he absolutely should NOT be President-elect, and also why the Electoral College completely f’ed up today.

First, more evidence – as if we need any – that Trump is a pathological liar, apparently completely disconnected from reality. How many outright lies can you find in Trump’s statement on his victory in the Electoral College? Well, let’s see: 1) in no way/shape/form was Trump’s victory a “landslide,” let alone a “historic” one (in fact, Trump lost the popular vote by 2.9 million and his electoral vote victory was basically “meh” by historical standards; 2) the American people most certainly did not vote for him “overwhelmingly,” as once again Trump LOST the popular vote by 2.9 million to Hillary Clinton; 3) Trump’s Electoral College margin of victory was almost exactly what everyone had been expecting since Election Day, no clue what he’s talking about when he falsely claims it was “far greater than ever anticipated by the media”; 4) no chance Trump will “make America great again,” for two big reasons – a) America’s already great; b) Trump is going to be a friggin’ disaster. 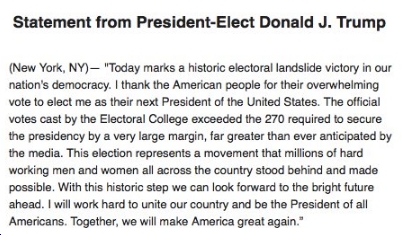 The following statement by Trump is even more disturbing than the first, and even more damning in terms of how wildly unfit he is to be President. As Kyle Griffin notes, German officials haven’t even labeled the Berlin attack as terror yet, let alone related to ISIS or other “Islamist” groups. Also, no idea why Trump is focused on ISIS et al murdering Christians – which they certainly do, and its horrendous, unacceptable, etc. – but the fact is that ISIS and other “Islamist” groups have murdered orders of magnitude more MUSLIMS, yet Trump doesn’t even mention those innocent victims. Why not? Also, why on earth would Trump (or anyone) want to turn this into a clash of civilizations with the Muslim world? That’s nuts, also wildly irresponsible for someone who is now – as horrible as it it even say – President elect of the United States.

Anyway, the bottom line is that Trump should not be President for a whole host of reasons, with these two statements illustrating just a few of the many, many reasons why not. 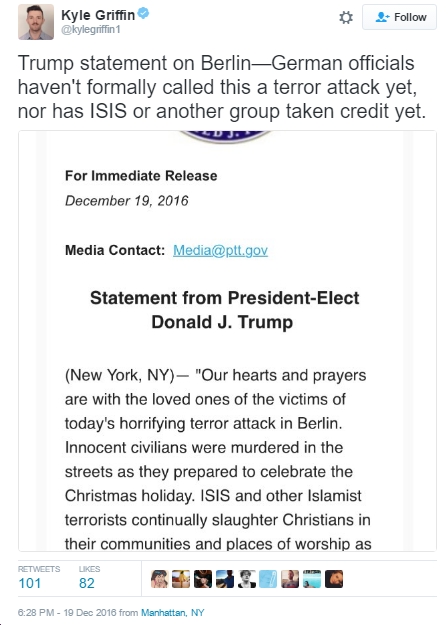