Yesterday, Lowell Feld and I had the chance to speak with Representative Don Beyer 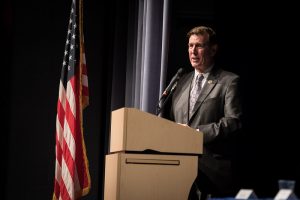 for nearly an hour.  This interview covered a range of issues.  We opened it with a discussion of Don Beyer’s ‘journey’ from car dealer to Climate Hawk.

Don Beyer is increasingly seen as a “Climate Hawk”, a policy maker who not only has an understanding of climate change challenges but who is willing/able to discuss climate issues and make this a priority in political life.  When Jim Moran announced his retirement and he thought about whether he wanted to run, as Representative Beyer put it during our interview,

First thing that you need to do when running for office, you need to sit by yourself and decide why you want to run in office. … As I did this, my core thought was that climate change was the deepest and most existential threat to humanity.

When I actually won, my primary responsibility was to be the simplest and the strongest voice for smart climate policy …

Considering that he made his fortune though auto-dealerships (the Beyer Automotive Group), not exactly considered the most climate-friendly of businesses*, our lead-off question was about his journey: How did he reach the point where concerns over climate change were core to his drive to reenter the political arena?

My political activism really started in 1970s, with a huge concern about the 10,000 nuclear weapons aimed at US and 10k aimed at the Soviet Union.

As part of this, Beyer joined a number of science-driven groups and went to a conference where he “realized that [he] was the only car dealer who was member of Arms Control Association”. Beyer, in my estimation, is probably the only member of his profession who “wrote an essay on why the United States should adopt a no-first use policy” as to nuclear weapons.

His engagement with the arms control world engaged him with science and scientists and, “over the years, little by little,” the organizations, individuals, and journals he engaged with moved more of their discussion, concern, and passion from nuclear weapons to energy and climate.

Energy policy was, for Beyer, part of that voyage. During the Carter Administration and the ‘energy crisis’, Beyer even moved the “the entire showroom outside in February … trying to make the the point that we needed to take the energy crisis seriously.”

Nuclear weapons, however, certainly maintained a serious part of the national discussion during the Reagan years but

by the mid-1990s, everything that I was reading in Scientific American was talking about climate change

And, by early 2000s, Beyer says this was driving his perspective on the national political situation.

In 2004, when I worked for Dean and then Kerry, the number one reason that I wanted a D in the White House was climate change.

And, since then, his concerns have only mounted.

And, he continued to connect the business activity with climate change and energy — at least at times.  Following seeing Inconvenient Truth, for example, Beyer ran a promotion at his dealership where people coming for a test drive got tickets to the film along with a bicycle or a tree planted in their name.

Just like changing lightbulbs in our homes, those bicycles and trees, obviously, haven’t solved our climate crisis. The situation only is worsening.

Everything that I am seeing shows me that 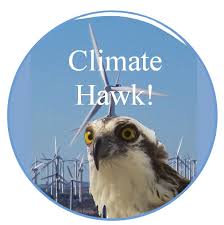 we didn’t exaggerate the climate crisis, but it is more serious and urgent that we realized or said decades ago.

And, thus Climate Hawk Beyer’s “primary responsibility [is] to be the simplest and the strongest voice” as to that “more serious and urgent … existential threat” and for policy options to address climate change realities.

* NOTE: A simple reality: essentially everyone who recognizes the reality of climate change has the personal challenge and issue of having things in their lives that contributes to climate change, no matter their efforts to help mitigate the problem. Thus, saved for another discussion, how does Don Beyer square what is easily seen as the discordant nature of his professional life. On one end, he owns a series of auto dealerships and thus gains significant income through continuation of the fossil-fuel economy and, on the other end, he is a Climate Hawk who ‘gets’ that climate chaos is an existential threat requiring significant and serious action.  We had only a limited time for discussion and this arena, itself, could take significant time to discuss. 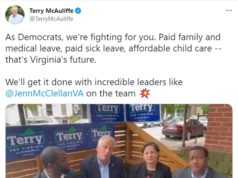 Video – Terry McAuliffe on Paid Family and Sick Leave: “There’s Hope on The Way… This is About Helping People”

Terry McAuliffe: "Virginia’s economy is bouncing back stronger than ever thanks to the leadership of President Biden, Governor Northam, and Virginia Democrats...We cannot let Glenn Youngkin do to Virginia what Donald Trump did to our country." https://bluevirginia.us/2021/06/virginia-posts-record-revenue-increase-as-collections-rise-66-2-percent-in-may#comment-5416725351