Thank you to one of my favorite members of Congress, Rep. Donald McEachin (D-VA-04) for opting out of the Trump inauguration. Here’s his statement:

The continued hatred and insults even long after the campaign is over is unacceptable.  He should have begun to bring people together the day after the election, and he has not started yet. I have a train ticket, but unfortunately, it has come to this.

The comments about John Lewis were just the final example.  He insults and denigrates a man who is a true hero, who has dedicated his life to civil rights, human rights and equal justice, who has shed blood for these values.

I simply cannot participate in this celebration of pomp, pageantry and parade.

The train ticket will go unused. Instead I will be in the district, as I have been all week, interacting with constituents and the community. On Friday morning, I will be with the Governor and the National Park Service to announce their grant to Third Street Bethel AME Church.  As I have said repeatedly during the campaign, my focus is on my constituents.

The VA GOP’s 2021 LG Nominee Headed Up “Black Americans to Re-Elect [President Trump]”; Here’s What That Group Stands For 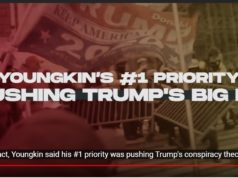