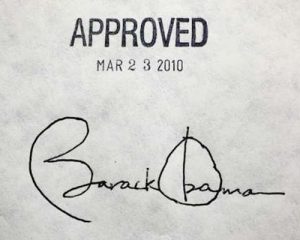 It was heartbreaking watching President Obama’s farewell address last night. We love that man so much. He accomplished so much, helped so many people, and yet the overwhelming feeling of the moment is one of lost potential, and that this man who saved the nation from economic crisis, leaves us in a state of political crisis. How did we get here?

The real crisis of American politics wasn’t 2016. The election of this compromised con man to the highest office in the land, with both Houses of Congress and dominion across the states, was a reaction to the actual crisis. That took place back in 2010. Let’s remember what happened.

In short, progressives were LIVID during the 2010 election, at the right to be sure, but also at President Obama and the Democrats.

In 2008, President Obama had come into office with a commanding mandate for change, and with the support of Congressional majorities in both the House and the Senate, but by 2010, the wind had gone out of his sails.

President Obama had already given away the Recovery act to conservatives as a big tax break boondoggle, and then allowed them to paint him as a big government “communist” because it actually spent some money. They didn’t care that he’d basically saved the world economy or that he had done it using their playbook, they still just wanted to kill the liberal.

It was obvious by the time we were fighting out the Affordable Care Act that President Obama was about to play the same game and get hit with the same lies. It was a disaster. Obama really lost the whole game when he dropped the “Public Option” which would have allowed all Americans to buy into Medicare. It was a lifeline to authentic reform in the eyes of the progressive base, but the Democrats deemed it unworkable, and it was exorcised from the bill. By that time the Tea Party was already well funded by the Koch bothers and was on the march, and the only shred of support or meaning he could have offered real progressives was the Public Option. It was our only clarion call, and President Obama let it die.

So, in 2010 the right was on fire, well funded, well supported, and well organized. The left had nothing to go to war for.

As a politico, I was well aware of what 2010 meant. That was the most important election in recent memory. It allowed Republicans to channel their trumped-up anger at the President to drive votes, and when they won, to gerrymander the hell out of Congress and take control in the states. It was a huge failing on the part of the President and his team. They failed to read the electorate. They failed to give liberals anything to fight for.

Did I vote? Hell yes! Did I work hard for the President and Democrats where ever I could? You betcha. But without driving and organizing the base around first principles, the movement as a whole collapsed when we needed most to be fighting for our lives.

This was a shared failure. It was a critical moment in American history. Progressives needed to be there fighting for the cause of freedom and opportunity. We messed that up by allowing that critical election to be overrun by the paranoid, the greedy, the deranged, and the liars.

President Obama and the Democrats also failed us. They failed to recognize that the conservative war on American freedom was well underway, and that our team needed something to fight for. They failed then as Hillary Clinton failed in 2016 to give the American people a genuine progressive agenda and vision. They failed to give us something to believe in.

The only solution to this problem is the Democratic Party, but that party must free itself from this conservative Stockholm syndrome that we have lived under since 1984. We must get back to our first principle: that the American government must exist to serve the American people, not the rising corporate oligarchy of dynastic wealth, not the violent militarism of right wing fear, and not the theocratic Dominionism of the hate-filled right.

The sooner we face this reality the better. It does no good to blame the President and the Democrats, but neither does it do any good to blame the voters. We must all accept our culpability in the current crisis of conservative hegemony if we are to organize effectively to fight it. The pathway back to authentic American prosperity, freedom and justice requires that our party take a new direction, and that is the direction of Lincoln, Teddy Roosevelt, FDR, Ike and JFK. We need to be party of the people.

Crosspost A Flight of Sparrows