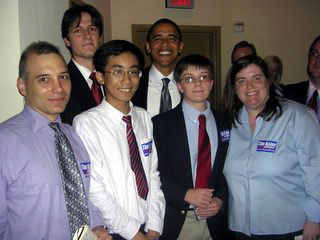 Back in 2005, I was working as an international economist at the U.S. Energy Information Administration and running a Virginia-based political blog (what else is new, right? LOL) called “Raising Kaine.” On July 20, I had the opportunity, along with a bunch of Democratic Virginia political bloggers (yes, back then, there was a “bunch” of Democratic Virginia political bloggers; from L-R in the above photo, yours truly, Waldo Jaquith, Kenton Ngo, Sen. Obama, Sam Penney, Maura Keaney) to attend a packed event for the Tim Kaine for Governor campaign at the Clarendon Ballroom in Arlington, featuring new U.S. Senator Barack Obama (D-IL), just a year after his star-making speech at the Democratic National Convention in Boston. 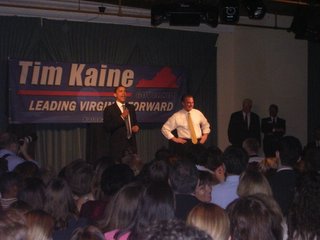 Following the speeches, the bloggers were escorted backstage for our chance at asking Sen. Obama a question. My question was about the Jerry Kilgore (R) for Governor campaign’s strategy of tearing people down, of dividing people, of using racial code language, even of denigrating other peoples’ religion and values.  I asked Sen. Obama how we could fight that kind of strategy without sinking to their level.  Sen. Obama’s classy response was – not surprisingly coming from him – that Democrats needed to focus on our own “message of hope,” because “when people feel helpless they’re vulnerable” to the type of fear-mongering that the Kilgore campaign was engaged in.

In other words, when they go low, we go high, as Michelle Obama likes to say. Except that today, as the heinous Donald Trump is about to be sworn in as President of the United States (instead of the infinitely better-qualified Hillary Clinton), and as we watch the parade of horribles he’s nominated for high-level positions come before U.S. Senate committees, I’m seriously doubting that advice and thinking more along the lines of “when they go low, we also go low if that’s what’s necessary to defeat them.” More broadly, after the horrendous 2016 election – one which saw the worst, most “deplorable” side of America rise up in all its ugliness – I’m definitely not feeling the sense of optimism (or positive view of humanity) that Barack Obama clearly felt back in 2004-2005, and quite possibly still feels today.  How about you?

P.S. See below for my Raising Kaine post from just after the Clarendon Ballroom event, when I was still giddy from meeting Barack Obama and having a chance to ask him a question… 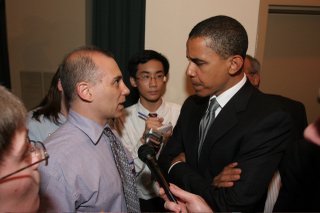 I’ll tell you, whatever happens in coming weeks and months, no matter how things go, tonight was one HELL of a night in Arlington — with Tim Kaine, Barack Obama (see photo by our own 14-year-old superstar Kenton Ngo), Jim Moran, Bobby Scott, and several hundred fired-up Democrats ready to kick some serious, er, donkey.  Yeah, that’s it….donkey!!

But seriously.  Perhaps I’m just a bit giddy right now, having had the chance to meet one of the great rising stars, not of the Democratic Party, but of the United States of America.  I’m talking, of course, about Senator Obama, the man who electrified the entire nation with his “Audacity of Hope” speech to the Democratic National Convention last summer.  Need a reminder of what he said?  Here’s a snippet:

The pundits, the pundits like to slice-and-dice our country into Red States and Blue States; Red States for Republicans, Blue States for Democrats. But I?ve got news for them, too. We worship an “awesome God” in the Blue States, and we don?t like federal agents poking around in our libraries in the Red States. We coach Little League in the Blue States and yes, we?ve got some gay friends in the Red States. There are patriots who opposed the war in Iraq and there are patriots who supported the war in Iraq. We are one people, all of us pledging allegiance to the stars and stripes, all of us defending the United States of America.

Does that ring a bell?  If not, we were reminded of that speech tonight as Obama spoke of American values, of how “we are all connected as one people,” or our “mutual obligations,” of making sure our senior citizens have a “retirement with dignity and respect,” of how whether you are poor or wealthy shouldn’t matter in terms of being able to go to college, and of how our country needs to be “respected not just feared around the world.”

That’s right, these are not Democratic values, they are American values, no matter what the cynical, slick, shameless slime machine of Howell/Kilgore has to say about it.  Just remember, those people — Howell and Kilgore — represent the worst in America.  Barack Obama and Tim Kaine represent the best.  As Obama said in his speech to the pumped-up crowd, largely of young people, we can’t let the “politics of cynicism,” of “power trumping principle,” of candidates who are “long on rhetoric [but] short on substance” prevail.  In other words, we can’t let Jerry Kilgore and his politics of division, destruction, and moving backwards on hard-won progress stand any chance in hell of winning this November.  And the great thing was, Obama came bearing not just words, but also a cool $10,000 for Tim Kaine to help him on his way.  Obama not only “talked the talk,” he also “walked the walk.” Great stuff.

Listening to Obama tonight, it was so clear why we we need good men like Tim Kaine, a person who has devoted his entire adult life to putting his faith into action, to measuring himself “by what we do in the lives of others,” and by working to make the world a better place out of a deep sense of faith and values.  It was so clear why we need to get the message across to everyone that the Democratic Party is a “party of hope and energy,” of “building things up not tearing them down.”  It was so clear why we need to make sure people know that it’s the Democrats who are the ones who know how to run things, who believe in “inclusion, equality, and fiscal responsibility.” Not the Republicans.

As Jim Moran said in his remarks, “Tim Kaine is our best and only hope in Virginia to sustain the progress of the last four years…our first point of resistance.”  Moran continued that if Jerry Kilgore wins, we will be turning the state over to people who are all about “selfishness and greed.”  Now, with the Supreme Court lurching to the right under George W. Bush, we could be at the mercy of people who want to undermine our civil liberties, our human rights, and our right to choose what to do with our own bodies.  Simply stated, we can’t let that happen.

Fortunately,  as Jim Moran said, “[Republicans] don’t own moral values any more than they own this country.”  In contrast, according to Congressman Bobby Scott, the Republicans “will take money from the poor and food from the hungry” while “lectur[ing] you on moral values.”  And who in their right mind would want people like that running their government?

When I spoke with Barack Obama after the speeches, I asked him about the Howell/Kilgore strategy of tearing people down, of dividing people, of using racial code language, even of denigrating other peoples’ religion and values.  I asked him how we fight that without sinking to their level.  In a nutshell, Obama’s classy answer was that Democrats need to focus on our own “message of hope,” because “when people feel helpless they’re vulnerable” to the type of fear-mongering that Kilgore and Howell are engaged in.  Then, as this race continues over the next few months, the voters of Virginia will come to see that the Kaine/Byrne/Deeds ticket offers hope and opportunity for the future, a chance to move us all forward as a state and as a people.  In contrast, Kilgore/Bolling/McDonnell offer the exact opposite.

Personally, I don’t want to go backwards in life, and  I doubt that many of you do either.  And I don’t want to be “led” by people who only want to denigrate others and tear people down.  That’s why we all need to get out there and work our tails off to make sure that Tim Kaine is our next governor.  And with nights like tonight, I’m convinced that we’re going to make that happen.

Thank you very much everybody. God bless you. Thank you.