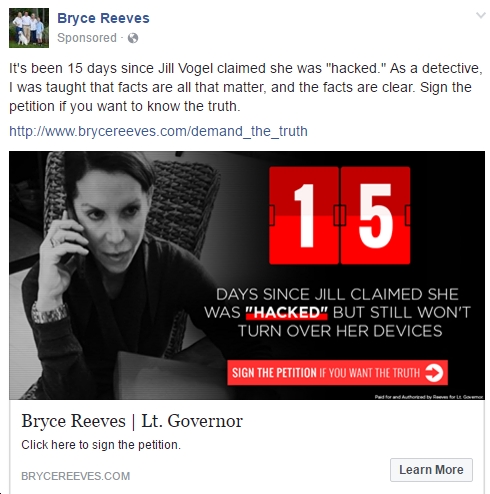 …I’ve offered from day one to help pay to have the Vogel’s equipment forensically tested by an independent firm to determine once and for all, who sent out the anonymous, false, appalling and disgusting emails last September.

Senator Vogel continues to deny involvement, but it’s very simple: let’s have an independent, third party forensic analysis of Alex Vogel’s cell phone and their home internet and computer equipment and put this behind us once and for all.

Right now the facts point to the Vogels 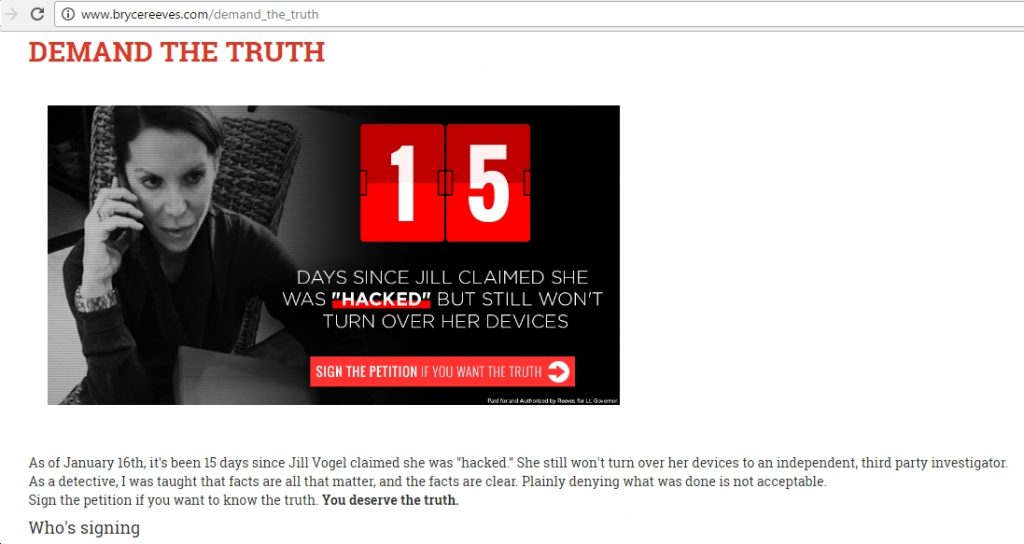 For more background on this story, see The GOP race for lieutenant governor is getting ugly in Virginia:

An email sent to some Reeves supporters accused him — falsely, he said — of having an affair with a campaign aide. Armed with subpoenaed Internet records, Reeves told The Washington Post that he had proof that Vogel or someone close to her was behind it. The message was linked to a cellphone belonging to Vogel’s husband, Alex Vogel, and to two IP addresses — one tied to the Vogels’ Upperville estate and the other to their next-door neighbors’ home, according to copies of the records provided to The Post.

“I don’t even know what to say, I’m so hurt,” said Reeves, a former Army Ranger and Prince William narcotics detective who is married with two children. “I’ve been in their home. I’ve eaten dinner with them. I’ve gotten to be a good friend of their children. But I guess when you want to win at all costs, you’ll do whatever it takes.”

Vogel, a nationally known GOP ethics lawyer, referred questions to her campaign manager, Pat Trueman, who issued a statement saying that the Vogels knew nothing about the message. The statement said the couple had not yet determined if the email really was linked to Vogel family electronics, saying they had only learned about Reeves’s claim after Christmas.

But the statement raised the possibility that the Vogels, both high-profile attorneys who made headlines in 2015 by buying part of an Upperville estate that had belonged to the late billionaire arts patron Rachel “Bunny” Mellon, had been victims of hacking.

Time for Dems to break out the hot-buttered popcorn? Sure, why not — but keep in mind that once the GOP primary ends and we turn to the general election, it’s HIGHLY likely that Republicans will unite around their nominee and against whoever the Democrats nominate. So sure, enjoy the popcorn for now, but don’t assume this Republican primary nastiness will have any bearing on the final election results in November…