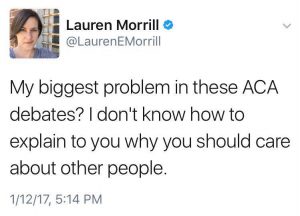 People ask me all the time, “How did we come to this?” Shaken in disbelief that we could have elected Republican majorities at nearly every level of American government, and a lifelong betrayer of trust as President of the United States, people just can’t fathom what the heck is going on.

There are tactical reasons, of course, like voter suppression and gerrymandering.  There are also strategic reasons, like the rise of conservative media and the increasing separation of society into hermetically sealed, ideological echo chambers.  There are historical reasons and there are political reasons as well. But the greatest reason in my mind is something we as Progressives and Democrats can face, and with courage and perseverance even triumphantly overcome.  It is a refocus, not only in terms of messaging, but in everything we do.  It is the power of our mission as a movement, and that our role in society must be to champion the policies that protect authentic American freedom.

I came across the attached heartbreaking meme on the internet, and it fully encapsulates the core problem we face.  With the repeal of President Obama’s landmark Affordable Care Act now immanent, many of us are left speechless. As the young woman who authored this question writes: “My Biggest Problem with these ACA Debates?  I don’t know how to explain to you why you should care about other people.”

It’s heartbreaking, isn’t it?  Not only should common decency and civil society simply eliminate the question at all, but decades of conservative messaging have eliminated our responsibility to one another in the eyes of movement followers.  In the conservative/Ayn Randian world view, you shouldn’t care about other people, that’s for the weak.

This is the great failing of the Progressive movement, writ large. We have absolutely failed to put progressive “freedom” and the progressive moral worldview before the American people in an effective way to counter conservative “freedom.”

In brief, the answer is this: conservative “freedom” means your right to take what you want and do what you want, no need to care about anyone else. As the Greeks would say “The strong do as they will, and the weak suffer as they must.” In practice, conservative freedom amounts to the domination of society by a white, male, corporate, theocracy, because those are the people that our society primarily serves financially and gives power to.

Unfortunately, conservative aristocracy is the primary cause of the downfall of capitalism and democracy throughout history. From the Middle Kingdom to Rome, from England to Germany, when real freedom falls, it’s because government has stopped serving the common good. Read about the collapse of the Roman middle class and the fall of the Republic.  It reads like today’s headlines.

In stark contrast, progressive freedom seeks to protect and serve the interests of a well-informed, healthy, powerful, and wealthy middle class as the center of society and the only protector, long-term, of the core tenants of American faith, democracy and capitalism.  Where conservatism serves monopoly and authoritarianism, progressive freedom is the embodiment of the founding ideas of America, that each of us has the right to fulfill his or her potential, and that it is the government’s role to protect that opportunity.  That means security, education, healthcare, food, justice, and a safe environment.  These are the common good, the enemies of authoritarianism and the Conservative movement.

As we await the inauguration of Donald the Betrayer as President of the United States, and as the policies of conservatism get their chance to wreak havoc on American lives, there has never been a better time for us to realize that our values as Progressives and Democrats are America’s primary values.  The more we are able to effectively represent them, the better chance we have to save ourselves from the cycles of history.

Why should you care about other people?

Because American freedom depends on it.

Crosspost:  A Flight of Sparrows – The 3143-County Strategy to Save the Democratic Party, America, and Mankind