Barron Trump’s elementary school education might just rank as the most expensive educational program in world history — bar none.  Forget the $45,000 or so annual tuition bill, the security tab for maintaining Melania and Barron Trump in New York City, so as not to disrupt his elementary school program mid-year, is somewhere between $2,000,000 to $4,000,000 day in, day out.*  Just imagine this: America’s taxpayers are going to shell out somewhere in the range of $350,000,000 to $700,000,000 for security costs just for Barron to finish out this school year.  And, if this situation continues for four years, we are talking perhaps in the range of $2,800,000,000 to $6,000,000,000+ for this security.  That is right, maintaining Melania and Barron in New York City could cost the taxpayer $6 Billion (yes, Billion with a CAPITAL B!) if Donald Trump makes it through a full term without either the 25th Amendment or impeachment coming into play.

This easily ranks as one of the greatest absurdities in U.S. government expenditures in history — a huge expenditure that is seemingly being accepted by our political ‘leadership’ without serious question. (A question that we’re likely to be asking quite often in coming months/years on issue after issue: Where is Jason “Benghazi”  Caffretz when we need him?)  When faced with such absurdities, a basic question:

What could we do with the money?

Across the United States, too many children go to school in aging and overcrowded school facilities.

School districts in the United States spent more than $14 billion ($14,123,865,000) on construction projects completed during the 2014 calendar year. Almost $7.8 billion of that was spent on new schools, accounting for 55 percent of the construction dollars.

The amount of money being expended on Trump Tower security could boost total spending on school construction by over 10% — with jobs and economic activity improving people’s lives in Red, Blue, Purple, American communities around the nation.

Take a gander at just how many new schools could be built with the cost to taxpayers of keeping Barron Trump in his private New York City school:

As a building program, 275 total schools across the nation

There is a shortfall in US school construction — even Barron’s school costs wouldn’t make up the shortfall in requirements, but they would help. And, they would create good jobs in communities throughout the nation.

One of the stunning developments across the past decade has been the dramatic — and continuing — plunge in renewable energy prices.  Solar, for example, is heading toward <$1 per watt installed.  For the price of having Barron avoid mid-year disruption, the United States could install in the range of 1-2 gigawatts of additional solar electricity generation per annum. Over four years, in the range of 6-8+ total gigawatts of solar electricity capacity — or roughly the equivalent of a large nuclear power plant.

More honestly, we could use those resources to spark (such as with an increased tax credit) solar, wind, and other renewable electricity capacity such that the real impact wouldn’t be 6-8GW of ‘bought’ solar power but perhaps 30GW+ of capacity sparked through various forms of assistance (lower interest rates, permitting help, tax credits, …).

While the cost of keeping Barron in a New York City elementary school wouldn’t solve the Climate Crisis or come anywhere near to matching China’s massive ($350B in five year) commitment to clean energy, it would enable Americans and American to reap benefits from a clean-energy future.

In 2016, the average Pell Grant was $3,700.  Roughly an additional 500,000 to 1,000,000 additional Pell Grants could be issued for the cost of Barron Trump’s elementary school program.  Or, with these resources the Federal government could provide 100,000 American students with $15,000/year through a four-year university program. 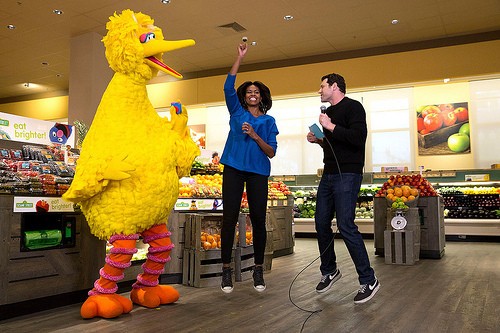 Not surprisingly, public television is rumored to be on @TeamTrump’s @GOP chopping block. (PBS action item.)  PBS KIDS and other public media reach 68% of all kids age two to eight. Over 80% of American households watch PBS during the year.

While we know that Federal funding for the Corporation for Public Broadcasting (CPB) is a tiny portion of Federal expenditures, just how much are talking? $445 million per annum.

That’s right, the entire Federal support for the CPB is perhaps less than half what it will cost to keep Barron in his private New York City elementary school and Melania in her (Donald’s) gilded palace.

In American politics, there is a long history of polemics asking “how many X could be bought for Y?”  Very typically, this has been those challenging defense procurement — such as ‘how many hospitals could you build for the price of one B2 bomber?’  In those past cases, however, a reasoned debate could occur as to the necessity of that expensive item. In the U.S. political system, most people would accept that it is legitimate to expend for the national defense and even that the Air Force should have bombers. The debate was over an — real or perceived — egregious price tag for that bomber.

Barron is a 10 year old child.  Hundreds of thousands of children move between schools every year — many of them in the middle of the school year. Sometimes this is joyous, sometimes traumatic,but something normal in American life.  Donald Trump chose to run for President knowing that, if he were to win, the exact move-in date. And, let’s not get too excited about Barron’s trauma in having the chance to live in the most famous home in America and experience the White House in a way that few have in its history. Expecting the American people to pay (literally) billions of dollars to maintain a separate household for Melania and Barron is yet another example of Trump’s narcissistic disdain for others and the Common Good.

It is well past time for Melania and Barron to move to the White House and for these resources to spent on the common good.

America’s youth don’t deserve to have Big Bird killed off so that Barron Trump can stay in Trump Tower rather than live in the White House.

"34% of Virginians think [Youngkin] should run [for president], while 52% do not, mirroring similar sentiment from August."

VA Reproductive Equity Alliance: Far-Right Del. Marie March’s “Personhood” Bill “puts the lives of pregnant people at risk and strips them of control over their bodies” ("This bill also bans access to critical forms of contraception, such as IUDs") https://bluevirginia.us/2022/12/va-reproductive-equity-alliance-far-right-del-marie-marchs-personhood-bill-puts-the-lives-of-pregnant-people-at-risk-and-strips-them-of-control-over-their-bodies