One of history’s most dramatic tales involves the failure of Britain to respond to the rise of military might and aggressiveness in Nazi Germany during the 1930s. Winston Churchill continually warned about the growing peril and the need to take strong steps to counter it. But he was relegated to the political margins, a voice in the wilderness, while the Prime Ministers of his own party — first Baldwin, then Chamberlain — practiced a policy of “hope for the best.”

Eventually the dangers of which Churchill warned were fully realized, and the war came, with nation after nation falling under the Nazi boot Britain itself was reeling from defeat in France and a near catastrophic withdrawal from Dunkirk. Eventually Churchill became Prime Minister, and with Hitler’s forces poised across the Channel to conquer Britain, the Battle of Britain was waged and fought and won by the threatened British.

Britain survived but — having waited almost too long to see the danger and rise to the challenge —  only by the narrowest of escapes.

And what about us, now, in Trump’s America? In particular, what about this battle now to waged over the control of the Supreme Court for the next generation?

There is talk now to doing everything possible to prevent Trump’s nominee to the Court from being seated. But has our side waited too long to join the battle?

It is right that our side is rising to join the battle. But the balance of power now — with the Republicans in control of the White House as well as both Houses of Congress — is now so much more adverse than it was when that Supreme Court seat first opened up last year.

We hear it said often now how that seat was stolen from us by the Republican obstruction of President Obama’s rightful constitutional role. How true that is. And how unprecedented was the Republican abuse of their role of “advise and consent.” It was an outrage, a political crime. And, because of the Chamberlain-like proclivities of our side, the Republicans got away with it.

There were objections voiced, of course, but all in all, the response from our side was tepid and weak. That was when there should have been a million people marching on Washington. That was when our leadership should have taken every bold action, and spoken every bold word, to make sure — to quote “the Dude” — that “this aggression will not stand.”

Who lets something absolutely precious be stolen from them without an all-out fight?

And that failure to go all out against this outrageous action from a consistent force of brokenness stands for this whole sorry period of American history, while this dark force has been rising on the right, violating norm after norm, engaging in naked power plays, disrespecting the spirit of the Constitution, disregarding the good workings of government and the needs of the nation.

Have we waited too long? Time will tell. Fight now we must, but now we must fight from a position of comparative weakness. The political equivalent of a “Battle of Britain” is now upon us.

Let’s hope that we can find the Churchills we will need to inspire and lead us through what surely will be a time of blood, sweat, toil, and tears.

And let us also learn what should be learned about ourselves in examining the question of “Why Liberal America Slept.” 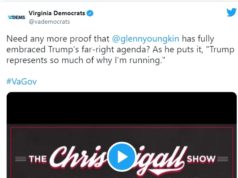