After college, I served two terms in AmeriCorps teaching math and reading comprehension. The kids I worked with were mostly the children of Somali refugees. At the time, I didn’t think there was anything particularly notable about what I was doing: I was just a kid myself who needed a job and liked working with children. I wouldn’t say I had a burning desire to serve my community or make the world a better place: I just really liked the idea of health insurance and some income, and this seemed like as good a job as any.

After nearly two years of working closely with this community of refugees, I came away thinking that these were the most “American” people I’d ever known. All the fanciful ideals we have about what makes a true American—hardworking, deeply religious, determined to improve their lots in life, devoted to bettering their children through education, always giving back when they reached a defined level of material success—you will find in abundance in the Somali community, at least the one I was a part of.

I’ll never forget speaking to a mother who was dropping off her son for his first class. She was dressed in a full-covered hijab with black gloves. I could only see the traces of her eyes. And with barely a hint of an accent, she proceeded to grill me on what the curriculum for her son was, what metrics I would be generating, and how to hold me accountable for her son’s performance. I had only been on the job three weeks, and I tried to answer as best I could, but I came away thinking that I needed to run this woman’s exact playbook when my own kids one day started attending school.

It’s perhaps why I am always so baffled at the indifference, hatred, and fear that tens of millions of Americans can so easily express when the question of which refugees (and under which circumstances) can immigrate to our country. I am perfectly fine with a debate on how many people should be allowed in, what kind of vetting there needs to be, and of course, how we can make sure these refugees become full, willing, and equal partners in the American experiment. I’m probably someone who advocates a more generous policy in terms of numbers, but I can appreciate that finding the middle ground on an issue like this is always going to involve serious disagreement.

But President Trump’s executive order suspending major chunks of our nation’s refugee system is not any attempt to find that middle ground. As the New York Times described the bulk of it, it “suspended entry of all refugees to the United States for 120 days, barred Syrian refugees indefinitely, and blocked entry into the United States for 90 days for citizens of seven predominantly Muslim countries: Iran, Iraq, Libya, Somalia, Sudan, Syria and Yemen. It also barred green card holders from those countries from re-entering the United States, the Department of Homeland Security said, though the administration said exemptions could be granted.”

It’s easy to get lost in the lawyerly language that the executive order uses. It never once explicitly uses the word “Muslim” or even specifically enumerates the countries listed above. But the thrust of it is clear: the federal government can rather indiscriminately detain and prevent entry into this country people who were otherwise eligible to come, applying a religious test in the process. That the burden was intended to fall on Muslims in particular is certainly a vile part of it. But the abdication of any responsibility and simply allowing unaccountable gatekeepers to detain people on their whims alone is infuriating beyond belief.

I need not dwell at any greater length on the effects of such an order. When a man’s stated goal is to ban all Muslims from coming into this country, there is little value in debating the particulars of each and every section. I need not pour over every word of a 1,000 page piece of legislation if the first few pages make it clear that it is designed to hurt me and my friends. People who want me to appreciate the subtleties of this ban are asking me to rationalize an agenda of calculated indifference and de facto religious discrimination. I do not care that a cancer is—at a very fine level—but a collection of atoms.

What I do care about is the holders of power who can stop all of this but refuse to. They must be punished for anything less than a full rejection of this order, backed by genuine action. A mealy-mouthed “while I accept these parts, I would prefer this” is the language of moral evasion. It is designed to imagine a world where real harm isn’t already being done, and by display of that imagined world, we all forget that the individual has—in fact—done nothing. They deserve to be lumped in with President Trump, who gladly accepts such wishy-washiness as tacit acceptance of his order anyways.

Luckily, there are many ways to punish these elected officials. The vast majority of their actions and beliefs are contingent on them being ratified by the people they represent. In other words, if an elected official’s constituents truly and forcefully convey that such a ban ought to be revoked, there is very little chance their representative won’t eventually abandon that ground as well. Being fired from a job you’ve worked your whole life for is powerful medicine.

Protests are a good way of conveying this message. Calling their office works as well. Attending their town halls and courting staff members is fantastic. Letters to the editor are vastly underestimated. But nothing is more powerful than a vote. Votes put these people into power, and only votes can remove them with immediacy.

The next chance to do that comes here in Virginia in 2017. Every one of the Republicans running for Governor—including likely nominee Ed Gillespie—sided with Donald Trump on his order. Sure, they all issued their measured press releases akin to telling a schoolyard bully that they prefer he simply jab instead of throw haymakers at the defenseless. Their hope is that such ambiguity is seen by Trump supporters as accepting the order while everyone else gives them a pass for trying to project some semblance of moderation. That’s all they care about. They want the benefits of embracing Trumpism without any of the costs.

Again, there’s only one real way to make the costs massively outweigh the benefits and prevent a further expansion of Trumpism. We have to elect Democrats up and down the ticket here in Virginia in 2017. If elected Republicans throughout the country see that doing anything but actively opposing Trumpism can cost them their jobs, they’re going to be running scared in 2018. That means stopping Trumpism cold in the very year he was inaugurated. And Lord knows one year of this is one year too many.

And let’s not forget: this isn’t just about altruism. Here in Virginia, the economy has really soared on the backs of immigrants. In Northern Virginia where I call home, immigrants have helped diversify the economy and built it into the regional juggernaut that it is today. They’re the ones buying all the new homes and establishing all the local small businesses. People forget this: immigrants that want to come here also want to make lots of money. It’s fantastic! Indeed, the rest of Virginia’s economy would probably look a lot more deindustrialized and hollowed out had these now-Americans never been allowed to come to Virginia. 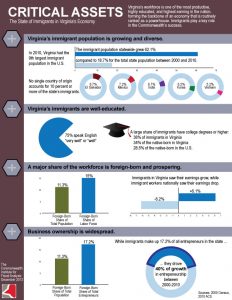 Again, I may never truly understand why the vast majority of Americans don’t see it the same way I do. But I have seen the American Dream–with all of its imperfections–with my own eyes, and I will not allow the next generation of Americans to be lost without a fight. I plan on dedicating a lot of time and effort to making sure everyone in this country can help stop Trumpism in Virginia in 2017. It’s the most American thing I can think to do right now.

The real Americans are out there. I have been fortunate enough to work with them and see them grow. We have done it for hundreds of years here in America, and we can do it for hundreds more. Those of us here just have to show up at the ballot box to bring them home.