Thanks to Democrat David Reid for submitting the following post about his candidacy against Del. Tag Greason (R-HD32, Loudoun County). This is one of the 17 Virginia House of Delegates districts won by Hillary Clinton in November yet currently held by a Republican. That needs to change ASAP, which is why we should help David Reid win this race. Need more motivation? Here are a few articles on ol’ Tag you might want to check out: Del. Greason to constituent: How ‘intellectually lazy’ are you?; Greason Rebukes 1994 Charges and Loudoun Republicans Double-Down on Divisive, Anti-Gay Agenda. Also check out Project Vote Smart, which finds that Greason has received a consistent ZERO rating from NARAL Pro-Choice Virginia, a pathetic 22% rating from the Virginia League of Conservation Voters in 2016 and a 92% rating from the extremist Virginia Citizens Defense League. Clearly, this guy should NOT be representing a district that went for Hillary Clinton 55%-35% in November 2016. Let’s remedy that once and for all this coming November!

In 1972, my family moved from Rockbridge County, Virginia — where we lived in a four-room house that didn’t have an indoor bathroom — to the United Methodist Children’s Home in Richmond, Virginia. Each of the four children was placed into “cottages” based upon our age and gender. I lived at the Children’s Home for six years, before moving to Tahlequah, Oklahoma with foster parents.

My first paying job was at the Children’s Home, where I helped maintain the 40-acre campus and was paid 35 cents per hour. The children would cut the grass with tractors and push mowers, pick up trash, trim bushes, edge sidewalks, and maintain all the equipment. It wasn’t very much money, but it taught me the value of a hard-earned dollar and the importance of hard work.

The lessons I learned at an early age prepared me for the hard work that would be necessary for me to become the first person in my family to graduate from college. I was only able to afford college thanks to the availability of Pell Grants, Guaranteed Student Loans, College Work Study, and academic scholarships.

Out of a deep desire to give something back to the country that had given me so much, in 1988 I joined the US Navy Reserve. I served our country for 23 years as a Naval Intelligence Officer, when I honorably retired as Commander in 2011.

While in the Navy, I made two deployments to South Korea, one deployment to Iceland, a field deployment with the US Army, and participated in a NATO exercise on board the USS Mount Whitney. During my service, I was awarded the Navy and Marine Corps Commendation Medal on three occasions. My experience in the Navy gave me the tools needed to become a business professional in strategic management, banking, global telecommunications, and the defense industry.  In 2014, I founded my own small business, Rockbridge Consulting, which specializes in studies and analysis.

I’ve also been involved in the community as a recreational and travel soccer coach and a high school soccer referee. My wife and daughter volunteered at the Loudoun Interfaith Relief food pantry and we attend the Arcola United Methodist Church.

My wife, Barbara, and I have been married for 23 years and have lived in Ashburn since 2000. Our two daughters, Elizabeth and Rebecca, attended Loudoun County Public Schools and received an outstanding education at Mill Run Elementary School, Eagle Ridge Middle School, and Briar Woods High School.  Our eldest daughter is now a junior at UVA and our youngest daughter is a sophomore at Lynchburg College.

My humble beginnings taught me about honesty, integrity, and the value of a hard-earned dollar. I want to bring these core values to Richmond because the incumbent, Republican Delegate Tag Greason, has lost touch with what’s important to Loudoun County. Despite being in the majority party and serving on the powerful Appropriations Committee, Delegate Greason has failed to deliver positive results for Loudoun County and has proven himself woefully inadequate at fighting to bring our fair share of our tax dollars back to Loudoun County. Instead of working with fellow members of the Loudoun delegation to reduce the burden of tolls on the Greenway, Delegate Greason refused to support legislation that would have encourage distance-based pricing on the Dulles Greenway. Delegate Greason votes lock-step with Republican leadership on divisive legislation that does little to bring progress and inclusivity to our state government. For example, Delegate Greason voted in favor of the shameful “Day of Tears” resolution, voted to defund Planned Parenthood, votes against LGBT equality, and consistently votes against commonsense measures to reduce preventable gun violence.

As HD-32’s delegate, I will fight to make college more affordability because I know first-hand that a college education is the pathway to the American Dream. It is unacceptable that Loudoun County remains one of the three counties in Virginia that does not provide full-day kindergarten to all our students. I will work with the Loudoun delegation to bring our fair share of tax dollars back to Loudoun County so that we can meet the needs of our growing population, ensure public safety priorities are funded, and that we are continuing to invest in public education. My opponent’s support for diverting funds from public schools shows that he has lost sight of the value of public education as the great equalizer.

Why I can win

HD-32 is one of the 17 House districts currently held by Republicans that was won by Secretary Clinton in November 2016. Clinton won HD-32 by 20 points, with 55% of the vote to Trump’s 35%. This is a battleground district that is growing increasingly more Democratic. My background, experience, and fierce work ethic will attract voters who are fed up with “business as usual” in Richmond. If we are going to change the priorities of our state government, we need to start changing who we send to Richmond to advocate on our behalf. I am not beholden to special interest money and I’m not too proud to work across the aisle to find solutions that make state government work for the people. 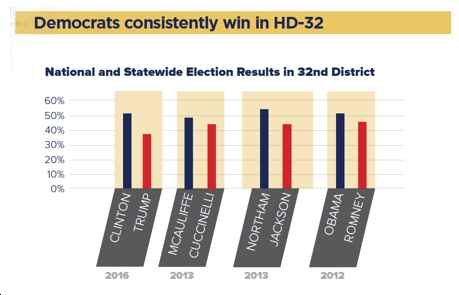 Wait, you mean the VA GOP is full of it yet again? https://bluevirginia.us/2021/09/saturday-news-greta-thunberg-and-students-rally-over-climate-change-the-january-6-commission-must-remain-merciless-arizonas-election-audit-comes-up-empty-but-t#comment-5547935977 h/t @BradKutner