Seriously, I could go on all day, as this is what the fossil fuel industry does – spends big $$$ to cover their tracks by pretending to be good corporate citizens, stewards of the environment, yada yada, when of course they are nothing of the sort.

In the case of Dominion Virginia Power, of course, this company is horrendous on almost every level when it comes to the environment and moving to clean energy. For instance, see New Report Finds that ALEC, Dominion, Other “Corporate Polluters Undermining Clean Power in Virginia”, which Dominion – and tobacco/cigarrett company Altria (nee, Philip Morris), among others – are sponsors of ALEC, a group which “helps large polluters in our state work behind the scenes to draft legislation to block action on climate change, pollution and in favor of clean energy,” attack the Clean Power Plan, and even promote climate science denial (as if that’s not bad enough, note that Dominion itself sponsors an anti-clean-energy, pro-fossil-fuels climate-science-denying blog; read more about that here!).

Of course, when it comes to Dominion, it’s not just the corporation, it’s some of the most powerful individuals in that corporation (hey, Romney said that “corporations ARE people,” right? LOL). For instance, check out the tweet below by David Botkins, Dominion’s Director of Media Relations, about being “at dinner” with “Virginia gentleman” Ralph Northam Saturday night. Of course, what Botkins doesn’t mention is that this was not a private dinner with Ralph Northam in any way/shape/form, but instead a major event – with hundreds of attendees – at the Science Museum of Virginia in Richmond.

Now, before we go any further, let me just make it absolutely clear that although it makes me queasy, there’s nothing necessarily wrong with the Science Museum of Virginia (or any other science museum) raising money from individuals and corporations, perhaps not even nasty, science-denying ones like Dominion Power (or Altria, which for many years spent shit-tons of money to deny any connection between their product, cigarettes, and lung cancer, despite enormous/overwhelming scientific evidence regarding that connection; just like climate science deniers today).

There’s (possibly) nothing wrong with that under one condition: that there is a total, impenetrable firewall between the museum’s programming and their funders’ economic interests. In the case of the Science Museum of Virginia, I haven’t found any evidence – although note that I haven’t spent hours looking, either; just a cursory search of the museum’s website – that their sponsorship by Dominion (or Altria, for that matter) has resulted in science denial, so that’s good at least. But again, it makes me nervous – and I’d strongly argue should make all of us nervous – to see corporations, particularly bad actors like Dominion and Altria, trying to greenwash/whitewash themselves by funding admired institutions like the Smithsonian, Science Museum of Virginia, etc. 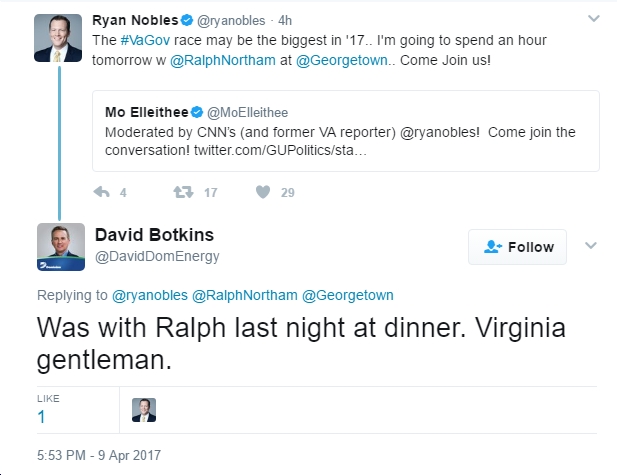 Which brings us back to Dominion hack/flack David Botkins’ tweet about attending the Science Museum of Virginia’s swanky Illumination Gala fundraiser this past Saturday night, where he apparently ran into Ralph Northam, whose campaign has confirmed to me that he attended the same event, following a family wedding – separately, not with Botkins, just to be 100% clear.

For a bit of background on Botkins, check out this October 2013 post, which reported on Botkins’ tweet, “Government shutdown? Lock the door and throw away the key.” Yep, Dominion Power’s comms guy is a far-right wingnut, who by the way used to work for fellow right wingers like George Allen (director of communications, 1994-1998) and Mark Earley (press secretary, 2001).  Also check out this article, in which Botkins argues that it’s perfectly fine for Dominion Power (theoretically a state-regulated monopoly) to essentially purchase our state government, including working to “capture” Virginia’s Department of Environmental Quality, which of course theoretically has power over Dominion. So that’s who we’re dealing with here, and that’s who was a the Science Museum of Virginia’s “Illumination Gala” fundraiser Saturday night.

By the way, that event wasn’t cheap, which is probably why it was filled with folks from wealthy corporations like Dominion Power, Altria, etc. 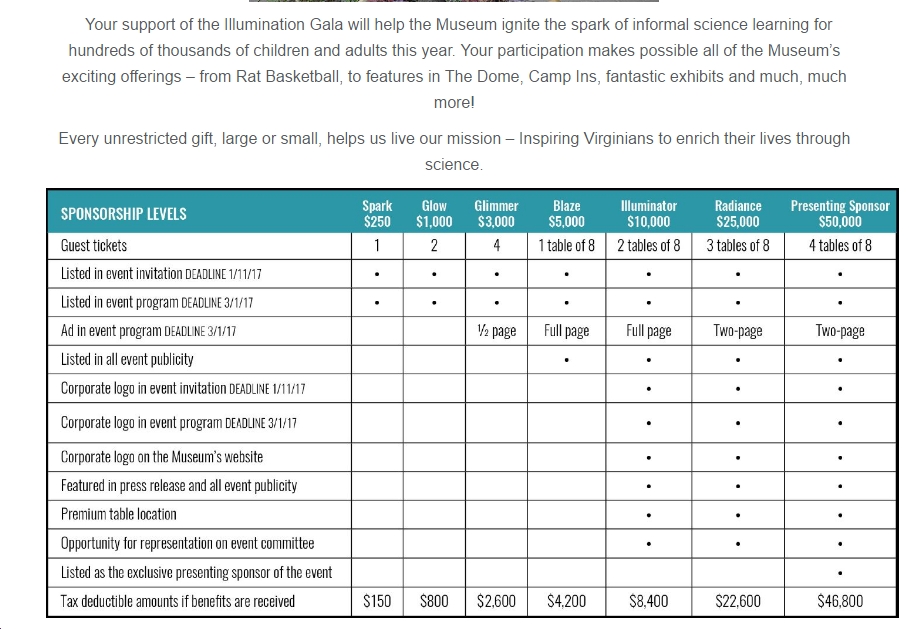 Also note who’s on the Board of Trustees for the Science Museum of Virginia — yep, our pal David Botkins, who actually chairs the Board! Getting uncomfortable yet? 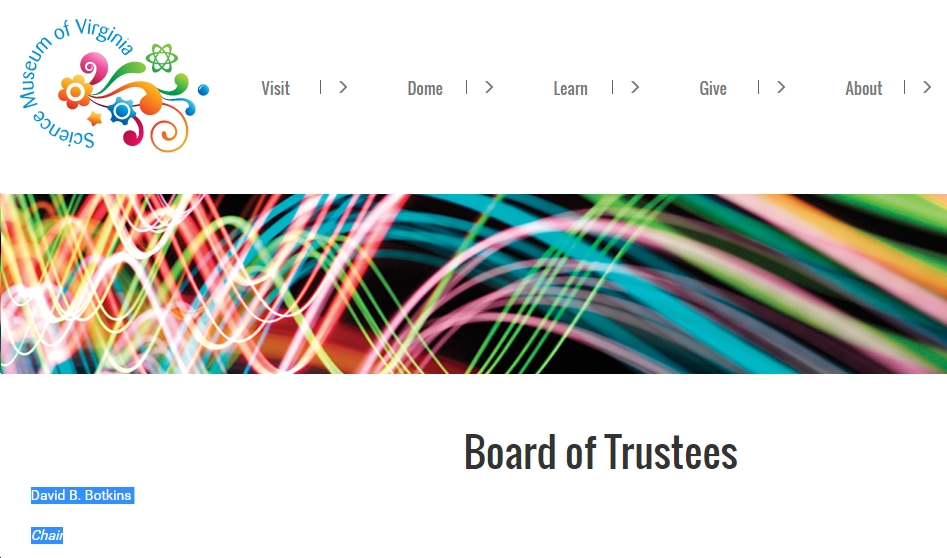 And check out some of the top donors to the Science Museum of Virginia, including Altria, Dominion and Botkins personally. 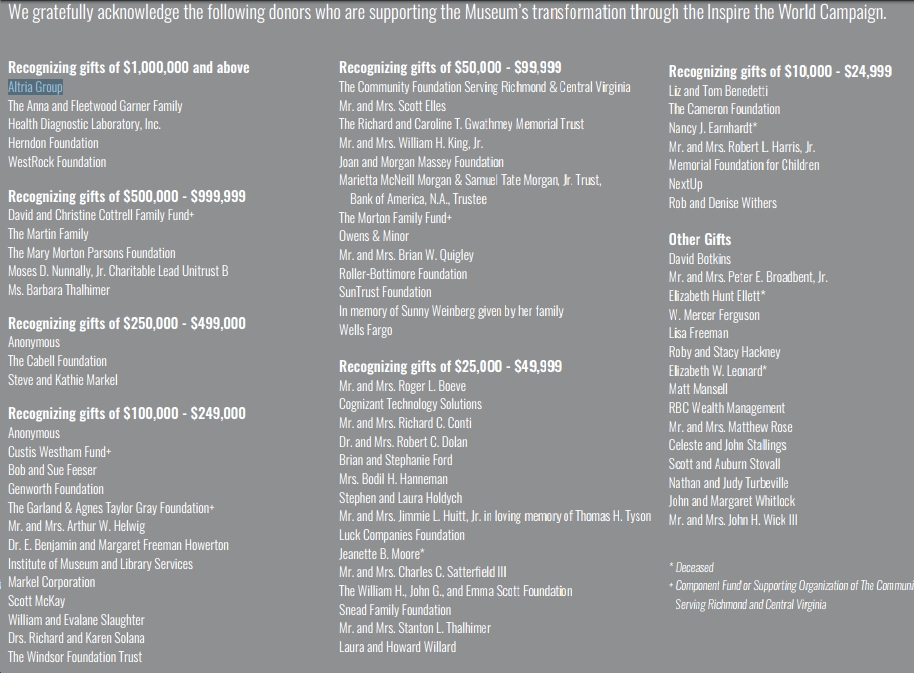 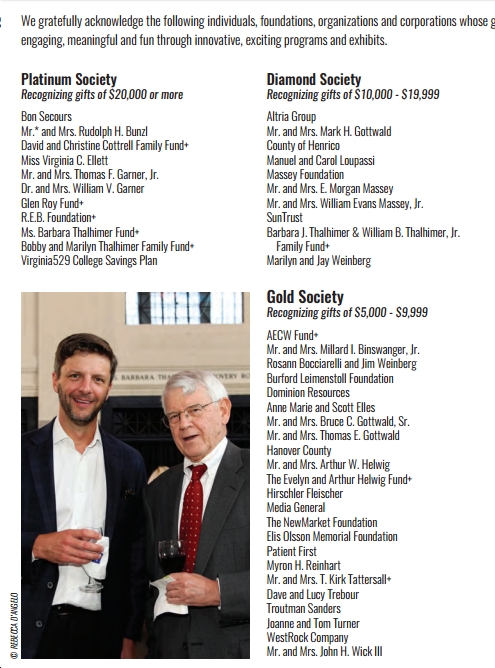 So…again, does any of this make you a bit uneasy, if not about the Science Museum of Virginia than about the slimy cesspool of (legalized) corruption euphemistically known as the “Virginia Way?” If not, why not?