So the topic of healthcare and insurance coverage came up. But, never fear, my friends! Mr. Garrett has it under control. 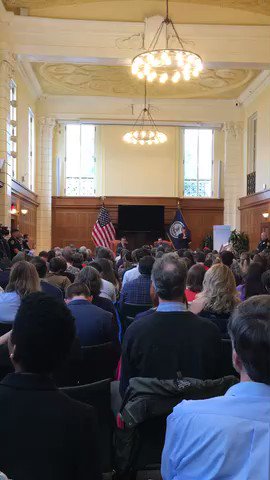 Squire for Delegate @SquireForYou This is your plan, @Rep_Tom_Garrett? Gut insurance coverage and let ERs pick up the slack? As an ER nurse I can tell you: that’s a bad idea. 8:49 PM – 31 Mar 2017

Yup. That’s right. No worries, y’all- everyone has care. They can just go to the ER! Problem solved! I dunno why we bothered with all of this “healthcare reform” stuff, the answer was right there in front of us the whole time!

Yet I don’t see these folks rushing to investigate or defund every other program in the Commonwealth that doesn’t have an “ironclad promise of Federal money being there in perpetuity”. Fancy that.
But I get why it doesn’t affect folks like Mr. Garrett, or the 66 Republicans in the Virginia General Assembly who voted down Medicaid expansion? How long d’you think they have to wait, or their family, to be seen if they’re having an emergent medical condition- or any condition, really? How much hassle do they have to endure getting to the doctor?
Do they have to balance trying to decide if they should even go to the doctor, because they can’t afford to lose those hours at work or they won’t make their rent payment? Because don’t forget- with Medicaid expansion, the folks who’re hit the hardest are working folks. The truly indigent are still eligible for Medicaid. The ones we’re screwing over are the folks working their butts off to try and make ends meet.

Nah; I can tell you, the most they pay attention is complaining if they do happen to come into the ER- maybe for themselves, maybe for a family member- and complain about the wait time- walking up to the triage desk to inquire, “Do you know who I am?” And then complaining out loud that it must be OBAMACARE!!!!11 that’s the cause of this outrage!

Of course, all I can do is smile politely and assure them we’re doing our best to get them seen as quickly as possible. I can’t tell them they’re working a nineteen year-old little girl who’s a heroin addict, and was just sure one of her friends would call 911 in time for her to get some narcan before it was too late. Or that they’re telling a guy who had low-grade abdominal pain for a few months, and finally decided to come to the ER since he had no PCP, that it turns out he’s got pancreatic cancer. Or that we’re short staffed because we lost another nurse to burnout from a constant barrage of twelve to sixteen hour shifts where you’re lucky to find time to pee, much less eat- and taking a break? Hah!

But that’s why I’m standing up and running for the Virginia House of Delegates this year. Because these folks just don’t get it. And yes, I can take umbrage with their political stance and separate it from them personally. Because they’re not evil, they don’t wake up in the morning and wish for people to suffer- and I know some folks here will disagree with that- but I don’t think so. It’s really much more simple than that.

And why would they? When you’re able to run fat, dumb, and happy in a gerrymandered district where you never have to try, never have to campaign, never have to be held accountable to the needs of your constituents or listen to anyone who doesn’t agree with you- what else would you expect?

And that’s what I intend to change; it’s why I’m standing up and fighting for Virginia.

Donate today, and help us keep taking this fight forward to November.