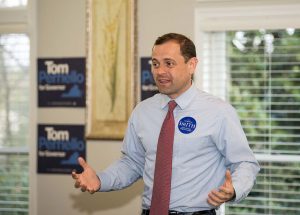 Virginia is at a pivotal moment. She can move forward on a progressive path, or she can turn ever backward to a grim past, to a place we thought died with the first Jim Crow era.

This past weekend in the beloved city of Charlottesville, the acolytes of neo-Nazi, Richard Spencer, sought to bring us back there. It is as if they are in denial that that awful place was defiantly racist, unAmerican, and seditious. At least one Republican candidate, Corey Stewart, would stir up xenophobia and racism and thus take Virginia to that awful place. The ugly torch bearers, intimidating people of color in their neighborhood park, were but a sample of how bad things could be when those harboring ill intent stir up hate.

The question is, which Democrat can beat back Stewart or the supposed mainstream Republican candidate, Ed Gillespie. The latter will be only too happy to sow racial discord and grow a Southern Strategy once again. His party has done it for decades and maxed the strategy in 2016. Virginia needs a leader who heals the Commonwealth’s divisions. Neither Democratic candidate for Virginia governor is anything like the GOP candidates. Both are clearly proponents of racial justice and justice for all. The questions we must ask are: Who will lead the way? Who has the courage? Who speaks up and does something about injustice most constructively and effectively? When the chips are down, who is boldly there for us, but at the same time has sensitivity to help heal divisions?

This weekend there were two leaders: Democratic candidate for governor, Tom Perriello, and Charlottesville Mayor Mike Signer. They shone a light on the evil on display in Charlottesville. They called residents to their better natures. And a community, stood up. They also illustrate something important, a lesson we democrats are so reluctant to learn.

Time and again we Democratic activists go to more the familiar candidate. We have talked with, commiserated with, even laughed with candidates multiple times each year at multiple events. We’ve broken bread with them so many times it feels comfortable somehow. We think we “know them,” but we do not really in most cases. We pay homage to those who’ve “earned” their Democratic cred and come to view their candidacy as their entitlement. Time and again, we do it. Nationally, we have had our share of wrong candidates: Hubert Humphrey, Ed Muskie, George McGovern, Michael Dukakis, Walter Mondale, John Kerry. In Virginia, Democrats once went to Mary Sue Terry and we lost. We went to Creigh Deeds and right winger Bob McDonald become governor.

Some of us bloggers tried to warn Virginia that Terry McAuliffe was the candidate to back. And you know the rest of the story. Later, when he ran again, McAuliffe proved we were right. He showed himself an energetic, able, insightful leader, a real leader. He hasn’t been perfect, on energy, for example. But he has been a darn good governor.

Here in North Carolina, Dems picked comfortable candidates — in 2008, Bev Perdue, and she fared poorly sinking like a rock in popularity, and, in 2012, Walter Dalton, who faced a terrible loss to Pat McCrory in 2012. We never seem to learn. We owe all of them our thanks for their service. We must thank them, honor them, let them know time and again we appreciate what they do. But we do not owe them a sure ride to the next level, especially when they are not the leaders we need to turn back the destruction of a Trump-like Republican Party.

We are tribal when we nominate our familiar candidates. When some try to warn that chants of “electability” are merely empty self-fulfilling prophesy, we do not all hear. Why do we so often make the mistake of guessing wrong on “electability”? The answer is an error of judgment called the familiarity effect. We all do it! But what seems familiar, safe and comfortable rarely is more “electable.” Yes, I know that in 2016 other factors came into play. There is no question that Hillary Clinton was the best candidate in the general election. But even so, we have to admit we had a certain amount of faux inevitability overlayed onto Clinton’s candidacy, our perception of her entitlement. No matter how devastated we are that she is not the president now, we have to stop that. We simply must.

It took North Carolina only six years to upend most of its decades of progress. Six years. But an incredible amount of damage was done in just two years (redistricting/gerrymandering, voting rights upended, fracking ban lifted, homophobic law relaunched, and more). After six years we find our Republican-dominated General Assembly subverting every imaginable thing, including cutting educational resources in Democratic-leaning localities. Nearly everything they do is designed to hurt real people. And they can over-ride our Democratic governor’s veto. (It is not enough to pick the right governor. You must gain enough seats in the General Assembly.) Virginia Democrats, you cannot lose this one. You cannot wait for the chance that SCOTUS will overturn the racist agenda of today’s misguided and wrong-headed Republicans. Unfortunately, they have played the race card for years, ramping it up in 2016, all the while pretending Democrats played that race card. You gotta admit they are a piece of work. We cannot let hate prevail. We cannot allow people with compromised morals to try to intimidate and harm people because of who they are. We cannot.

I respect your differing positions, dear reader, but I hope you keep an open mind. I know many of you are friends with Ralph Northam. I know many of you feel immense loyalty to him. Others think they know him, but only know him superficially. You may think he has earned this nomination. But no matter how good a man, or friend, he is (and I know he is both), he may not be the right person for the job at this moment. I would argue he is not. The fierce urgency of now is to not “North Carolina” Virginia’s politics.

This past week is but one example of what is at stake and why Virginia Democrats cannot be complacent. Many more reasons will be forthcoming in future diaries by Lowell and various other BV bloggers. Meanwhile, I urge you to give Tom Perriello a chance. Consider who has the energy, imagination, courage, and transformational ability to lead Virginia for the next four years. He will also garner more enthusiasm for the race and increase turnout. I urge you to consider the best, most creative fighter, Tom Perriello. So very much is at stake.