Not sure if these mean a heckuva lot, but for what they’re worth, here are Google Trends reports for: 1) “Tom Perriello” and “Ralph Northam”; 2) “Justin Fairfax,” “Susan Platt” and “Gene Rossi”; 3) the GOP gov. candidates; 4) the GOP Lt. Gov. candidates; 5) all the Dem primary candidates; 6) all the GOP primary candidates; 7) comparing the Dem and GOP gubernatorial candidates. All are within the United States for the past 12 months. In the Democratic governor’s race, Tom Perriello has had a consistent lead over Ralph Northam with people doing Google searches. For instance, from April 30 to May 6, Perriello led Northam 88-40, and from May 14 to May 20 Perriello led Northam 65-38. Note that Google normalizes numbers to 100, so it’s all relative. Also note a slow but steady upswing in Google Search traffic over the past few months for these candidates… 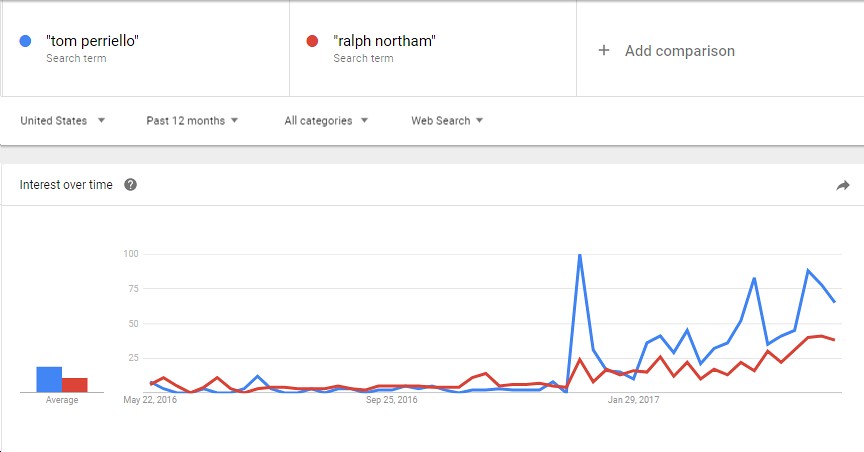 As for the Democratic LG race, the graph looks very “spaghetti”-like, but Justin Fairfax has led on average over the past 12 months (Fairfax 20-Rossi 13-Platt 12). From May 7 to May 13, Fairfax led Susan Platt and Gene Rossi 22-15-15. Also, note that there seems to be an uptick right at the end in Google Search traffic, but we’ll see what happens in the next week or two. 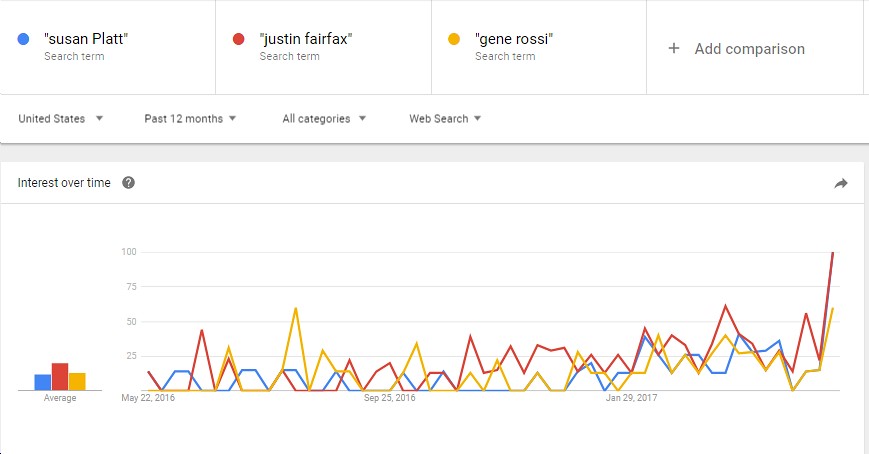 On the Republican gubernatorial side, Corey Stewart’s getting a lot more search activity in Google than Ed Gillespie and Frank Wagner, but that raises the question as to WHY people are searched for on Google. For instance, in Stewart’s case, he has a knack for stirring up controversy, such as over Confederate monuments and white supremacist rallies, but will that translate into Republican votes for him in the June 13 primary? I’m highly skeptical.

Here’s the Virginia GOP Lt. Governor’s race, with Glenn Davis left out because his name’s so common, it blows up the graph. This one seems to indicate that Bryce Reeves and Jill Vogel are neck and neck, with a possible slight edge for Reeves, which is in line with what I would have expected, actually. Also note what appears to be an uptick in interest in this race over the past couple weeks… 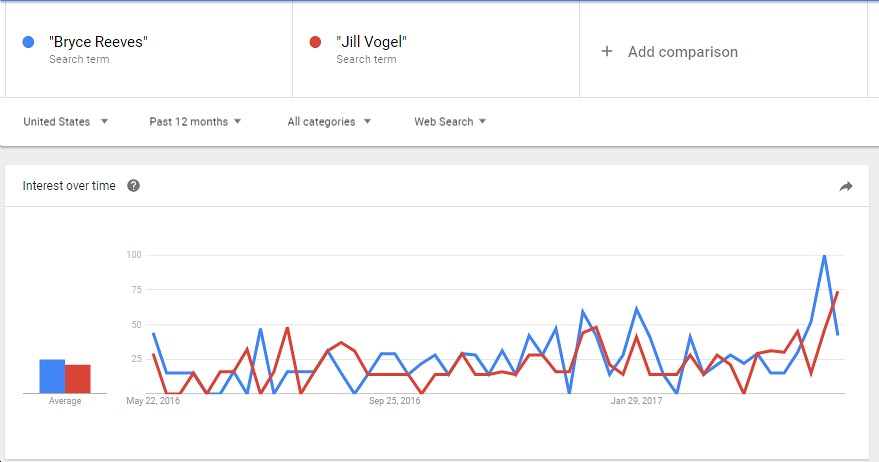 I also put together all the Democratic primary candidates so we could see how much relative interest there is, at least on Google search, between the governor’s and LG races. Clearly, there’s a ton more search activity for governor than LG, with Perriello at 65 (May 14-20) vs. 38 for Northam (same time period), 18 each for Platt and Fairfax, and 11 for Rossi. So, around 3-4 times more Google search activity for the Virginia Democratic gubernatorial than for the LG primary. If anything, I would have expected that to be even more of an edge for the governor’s race, but maybe people are starting to realize they don’t have any idea who the LG candidates and are searching on Google to figure it out? And again, note the upswing in interest in the Democratic governor’s primary over time. 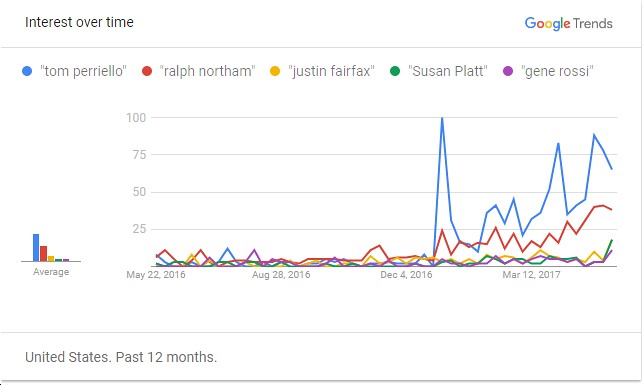 I also put together all the Republican primary candidates, and again we see about 3x more interest in the governor’s primary than the LG primary. 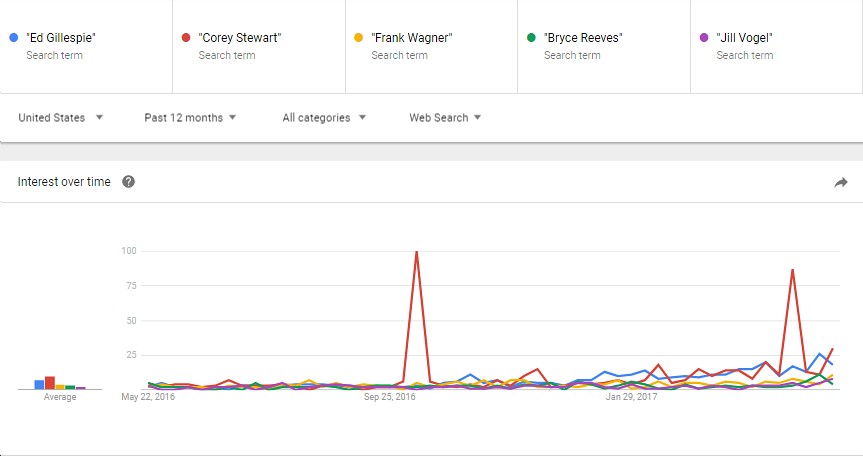 Finally, I put all the gubernatorial candidates – Democratic and Republican – together in the same Google Trends report. What it showed was that Tom Perriello (average of 12 over the past 12 months) led all the candidates, followed by Corey Stewart (average of 10), Ralph Northam (average of 8), Ed Gillespie (average of 7) and Frank Wagner (average of 4). 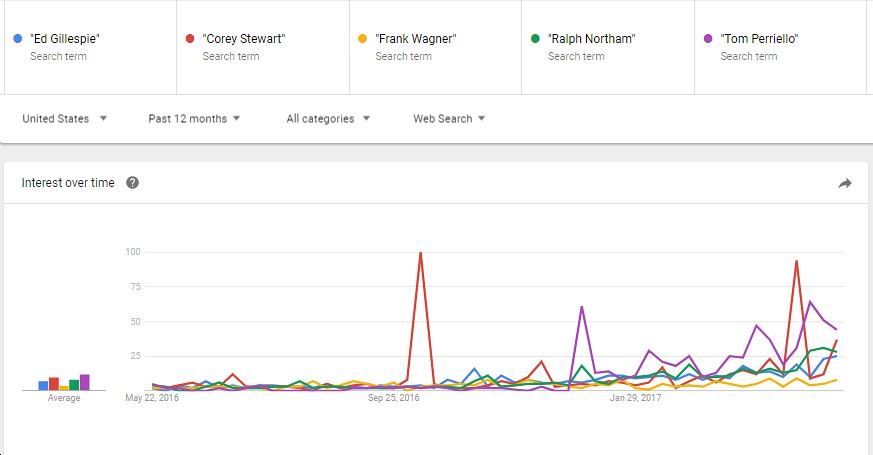 P.P.S. Just for fun, here’s Clinton vs. Trump in 2016. Note that Trump consistently out-performed Clinton (not bye a huge margin, but still…) on Google search, and also won the election (albeit not the popular vote). 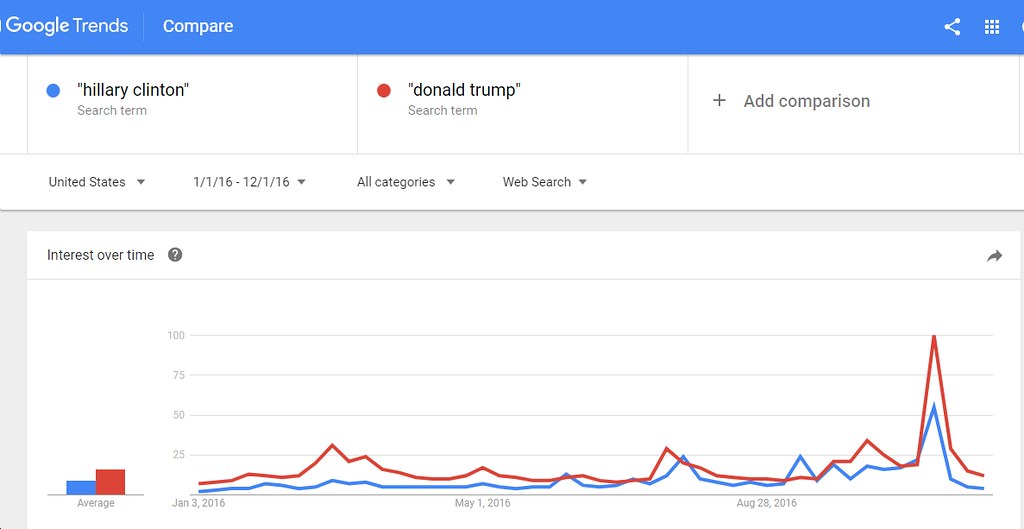