Much has been made about the actions of Congressional Republicans this week, but they are indicative of an overarching theme in modern Republican politics: a deep-seated contempt for working people.

This was on full display this week, not just on the Federal level but on the local level as well.  When my wife – who is a successful journalist, a member of the local business community, and a candidate for Commissioner of the Revenue in the City of Manassas – spoke in favor of the city’s capital improvement plan, the local right-wing blogs began their attacks. 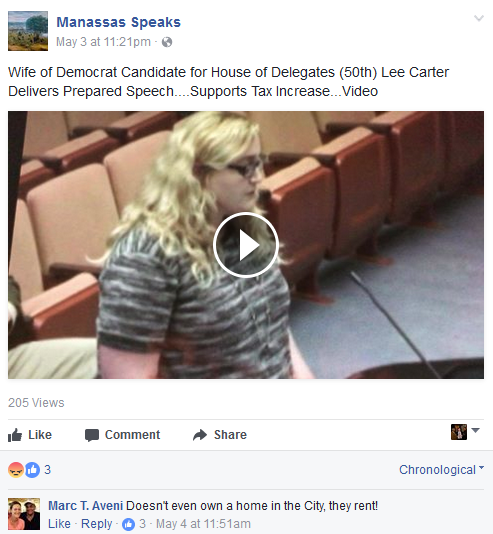 As if bloggers attempting to reduce her accomplishments to merely whom she married wasn’t bad enough, Councilman Marc Aveni chimed in with a message of his own: if you aren’t wealthy, you shouldn’t have an opinion.

Councilman Aveni seems unaware of the way that tax increases impact renters.  When the cost of owning a home increases, the vast majority of landlords in turn increase their tenants’ rent – often by more than the cost of the tax increase.  Yet when taxes are cut, the difference is more often than not pocketed by the landlord.  Regardless of which way the rate changes, the owner gets richer at the renter’s expense.

And yet the overwhelming majority of people recognize that taxes are a necessity for improving the conditions of our city.  The people know that our roads are deteriorating, that code enforcement is woefully inadequate, and that our city’s first responders and teachers are overworked and underpaid.  These are all conditions that can be fixed, if only we would make the decision to look after our entire city rather than just those with the most money to spend on elections.

This comes during a week in which the overwhelming majority of Republicans in Congress were seen actively celebrating their vote to force millions of Americans from their health insurance.  These are, by definition, the people who are most in need of healthcare and those who are least likely to be able to afford coverage.

Less known, but also extraordinarily important, was the vote that Congressional Republicans took this week to gut overtime protections for workers who put in more than 40 hours per week.

It is incumbent upon all of us, the working class of Virginia, to stand as one and reject those who hold the vast majority of us in such utter contempt.  The only way to do it is to rise in solidarity with one another and announce that an attack on one of us is an attack on all of us.  With the strength of our communities behind us, we can proudly declare a vision for a Virginia that guarantees healthcare for all, that has working infrastructure and pristine public spaces, and that treats workers and renters with the dignity and respect that they deserve.

And on November 7th, we can take that proudly declared vision and make it a reality with our votes.

Lee Carter is the Democratic candidate for the 50th district in the Virginia House of Delegates, running this year to unseat the Republican Majority Whip.