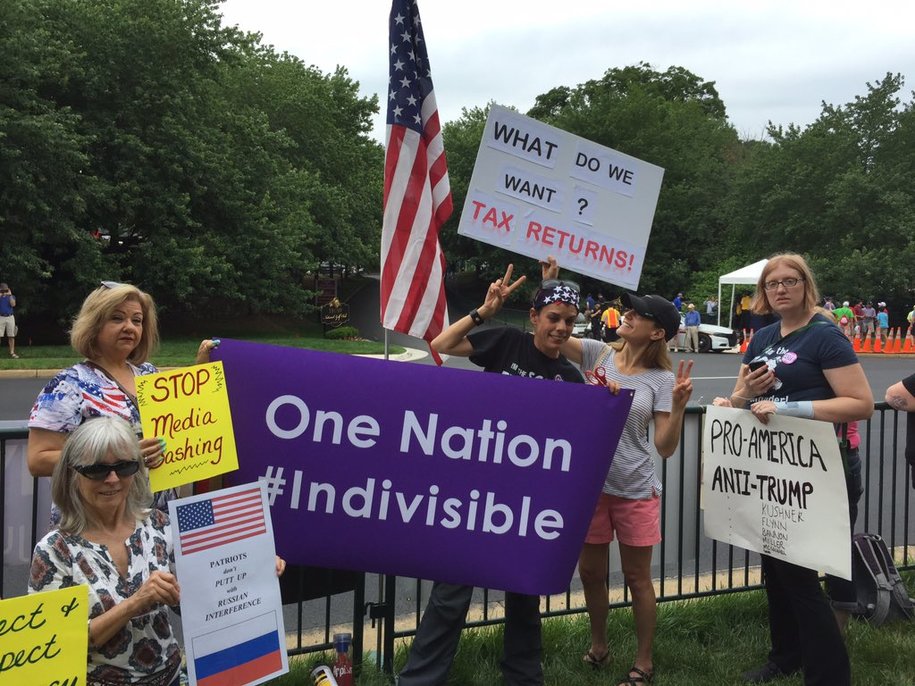 The Professional Golf Association (PGA) is one group that has doubled down on its association with the Trump brand. While The Washington Post‘s dead-tree edition featured For Trump’s golf course, PGA event is a marketing bonanza, (primarily) northern Virginia’s resistance mobilized to demonstrate their resilience in the face of the Trump kleptocratic kakistocracy*.

Here are a taste of the voices and messages that surrounded, by river and road, Trump National today:

More than 100 protestors on land and sea telling @PGATOUR and @KitchenAidUSA to #dumptrump at #PGAProtest pic.twitter.com/JDDhUtJcPv

* Kakistocracy: government the least qualified and least competent in society.

2. A player in this protest was candidate for Lt. Governor Susan Platt. She was the subject of vicious, racist attacks in a local (disgusting) blog as captured/reported in Blue Virginia.  Platt, btw, just called for taking down Virginia’s (too many) Confederate statues. One GOP candidate in the governor’s primary has vowed to resist that ‘over his dead body’.

3. Within today’s article in The Post, one intriguing item: Trump put up a ‘fake history’ placard at the Trump National Golf Club “on the historic Potomac River. Evidently, that placard still is in place.

Just checked: did @readonaldtrump take down this made-up historical marker after @npfandos reported it was false? No. pic.twitter.com/G4CoUYTrTA

4. Protestors aren’t just those physically there. For example, directly commenting to @PGA (mistakenly) and (accurately) @PGATour:

Come on @PGA we are a golfing family & want kids 2 grow up w/integrity & honor for game. And everyone knows that trump cheats… https://t.co/q4wGL3qKi7

More conflicts of interest.
There are HUNDREDS of equally good golf courses #pgatour could use that don’t bear @realdonaldtrump‘s name. https://t.co/7aGLe0jZKn

The PGA is using a Trump golf course. We need to let their sponsors that it’s not okay. Here the are pic.twitter.com/IWtaEgeYOn