According to Adam Parkhomenko, the following occurred last night at the McDonald’s on Lee Highway in Arlington, right near Heidelberg Bakery. He tells me had stopped there to let his son use the restroom, and this racist hate speech was on the wall. According to Adam, who grew up in Arlington, “We didn’t used to have this stuff here” — it mostly seemed to start after the election of Trump, including the post-Trump “wave of hate” seen at Arlington’s Yorktown High School. Adam adds that the McDonald’s manager “said they just learned of it and were handling it immediately; she was an older African American woman very upset about it…you could tell she was very sincere and literally someone had just told her a few minutes before.”  Let’s hope they catch whoever did this, but the problem is much broader than this one incident, including racism/xenophobia/etc. at the highest levels of the U.S. government (e.g., President Trump, Attorney General Sessions). Nasty times we’re living through right now, and all we can do – must do – is #resist. 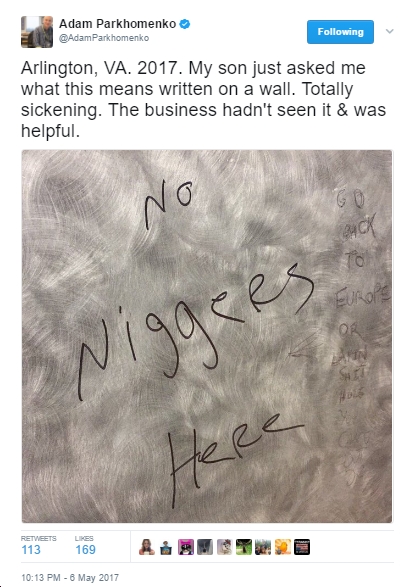