As always, you don’t get more demented than 2013 VA GOP Lt. Governor nominee – and possible 2018 VA GOP U.S. Senate candidate – EW Jackson. The fact, of course, is that by basically every independent analysis, “Trumpcare” will result in tens of millions of Americans (20+ million, according to the definitive CBO estimate) losing their healthcare coverage. Now, unless you think that healthcare coverage is completely worthless, then it should be a complete no-brainer that many of these people will be worse off – more illness, not as well treated (if at all), and ultimately more (and earlier) deaths. This is Logic 101, also 100% factual, nothing whatsoever speculative or inflammatory to point it out. And pointing out what’s actually in “Trumpcare,” what it will do (e.g., result in tens of millions fewer with health care coverage and many more people getting sick – and dying) is not – repeat, NOT – “why Repubcs are being violently attacked.” This isn’t just sick, by the way, it’s a calculated attempt to try and intimidate the 60%+ of Americans who oppose Trump to keep their mouths shut. We, of course, need to do the exact opposite – peacefully, of course, but strongly. And we can start by telling EW Jackson where to shove it. 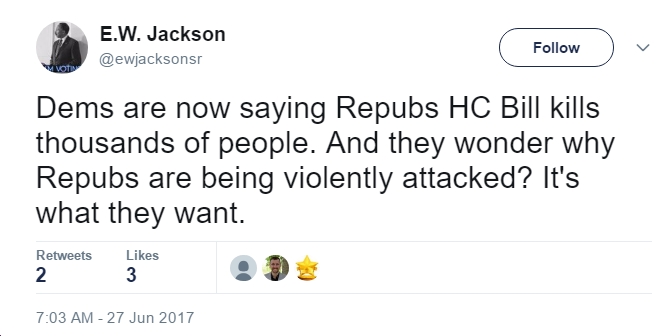 ER Nurse Kellen Squire: We Once convinced 96% of Americans to Get Fully Vaccinated. How Have We Fallen So Far?