At yesterday’s Republican Party of Virginia State Central Committee meeting, Ed Gillespie laid out his case (see video below) for why he thinks we should elect him governor in November. And what a case it is: based on ruinous policies – tax cuts for the wealthy, immigrant bashing, clean energy bashing, labor bashing, public education bashing (e.g., vowing to sign a “Tebow bill”), etc. – and wild-eyed exaggerations/lies about Democrats. Gack.

For instance, Gillespie claims that Ralph Northam is “one angry liberal” who “disdains us…looks down upon us…[pits] Virginian against Virginian, constantly trying to divide us”. WTF? Psychological projection again?  Not crazy enough? Gillespie also wildly argues that Ralph Northam has “embraced a radical environmental policy” (FALSE, unless you think that encouraging cheap/inexhaustible/clean energy, which overwhelming percentages of Virginians and Americans do, is somehow “radical”), wants to raise your taxes (FALSE, unless perhaps you’re super rich), “abandoned” Virginia’s so-called/Orwellian “right-to-work laws” (I must have missed that…wish he HAD abandoned that one, though); etc. And, as an added bonus, Gillespie bashes Virginia’s economy, which is actually in very good shape (3.8% unemployment rate in May, the lowest unemployment rate since May 2008, when the “Great Recession” was just about to kick off under Gilespie’s former boss, George W. Bush), in SPITE of Gillespie’s party’s “sequestration” and other idiocy.

Last but…actually, least, Gillespie’s overall vision is for Virginia to “look more like states to our south” (what, like Mississippi? Alabama? Louisiana? sounds great, huh?). Let’s just make damn sure we don’t let Ed Gillespie anywhere near the Virginia governor’s mansion, or he will “make Virginia great again” — just like Trump’s doing to America. And no, that is NOT a good thing.

P.S. Hat tip to RTD reporter Graham Moomaw, who tweeted about this meeting and alerted me to Gillespie’s over-the-top, out-of-the-mainstream comments. Oh, and if you thought Gillespie was extreme, how about the VA GOP Chair, John Whitbeck, who – as Moomaw reports – “Echoing Gillespie, @JohnWhitbeck [said] Scalise shooting shows extreme left wants Republicans ‘dead.’ “As Ed said, they frickin’ hate us.'” 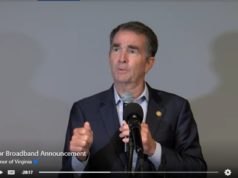