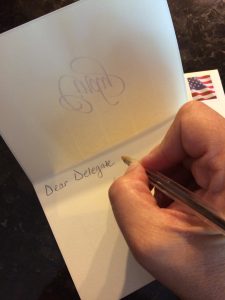 Just about every week, I contact my State Delegate, begging him to a) speak out and do everything in his power to oppose the pipelines, and b) refuse to take money from Dominion Power. And yet, he hasn’t agreed to do either. It’s frustrating and disheartening sometimes. Many of my friends know my arguments (heck, my 8 year old son can explain it): these pipelines are bad for our environment, bad for our water quality, don’t help anywhere near the numbers of people they claim to help, and most importantly to me, they use eminent domain laws to strip historic land from African American families who’ve owned it since they were freed from slavery. It’s a heartbreaking issue, and one that is very important to me.

So, will I not vote for my Delegate this year then?

Oh, is that where you thought this was going? You couldn’t be farther from the truth! I absolutely adore my Delegate, and he knows it! He has my vote for as long as he runs. If a Republican challenged him, I’d be the first person out campaigning my tail off for him. I’d give him my time, my money, and my energy. In fact, and I had to think about this one for a minute, if he were primaried by a Democrat–even if that Democrat opposed the pipelines and refused Dominion money–I would still not change my vote.

Does that mean the pipelines aren’t really that important to me? No, they really are one of the most important issues being decided right now. And this is not a “single issue”–it cuts across economic justice, environmentalism, economics, social justice.

So why will I still vote for my Delegate? For one thing, because he’s outstanding on so many other issues. He had the worst “batting average” of anyone in the House last year, and given that progressives are in a very small minority there, I consider that a badge of honor. Second, he works his tail off, all year round, serving my town, and Virginia. There’s rarely a minute outside of his “real job” (the one that almost all of our legislators still have to hold down, because we don’t actually pay legislators a living wage, since it’s technically a part-year job) that he isn’t meeting with constituents or attending events or speaking truth to power all over social media.

But the most important reason I would still walk through walls for my Delegate is that every week I contact him about this pipeline/Dominion issue that matters so much to me. And every week, he genuinely listens to me. He doesn’t patronize me or attempt to diminish my strong views on this. The fact that we can have this back and forth dialogue about issues we differ on is exactly how democracy SHOULD work. It’s up to us as representees to convince representers.

So, where does that leave me with Ralph Northam? Well, he has my vote, for reason number one above. That’s been true since the minute he won the primary. But for me to get from there to “walk through walls?” Well, there’s a little ways to go on that for me, more of that number three reason needs to happen. It’s not about some “purity test”; it’s about him being my representative, my voice, and to do that he needs to listen.

Northam made a start a week ago, attending an energy discussion in Arlington where he stayed and took questions–mostly about the pipelines–for an hour. And sure enough, I found myself just a couple days later, arguing online with someone (a Democrat) about why they should vote for him. It turns out it’s not that hard to inspire people and turn out your base–you just have to be willing to listen to them!