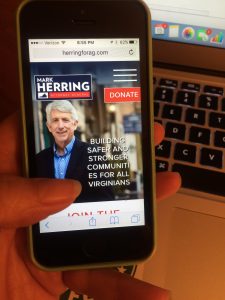 I wanted to do more canvassing this past weekend, but my family needed me in California. So, I took a break. Well, not really, because thanks to technology, it’s still really easy to contact voters in Virginia from as far away as California. So I signed up for several shifts of Relay texting for Mark Herring. Some other campaigns in special elections this year have used the technology, but I hadn’t participated in that, so I didn’t really know what to expect.

It is really a very different experience from canvassing, or phone banking for that matter. When you canvass, you’re face-to-face with a voter, standing at their door. It’s a little uncomfortable all around. Sometimes you and the voter get past that initial “talking to a complete stranger” feeling, but often you don’t, and you get a polite “thanks” before the door is shut in your face. Approaching someone you know won’t agree with you is scary, and we often restrict walk packets to only those who are in our own party, or at most Independent.

Phone banking is similar, only there’s even less of a connection and so there’s more of that stranger-minimal-politeness. Phone banking is great if all you want to do is convey information that an election is coming up and make sure the voter has a plan. But it’s pretty rare to have a long chat about policy and issues with a stranger on the phone.

Not so for texting! First, it’s super easy for the texter, and you have just enough anonymity to feel completely comfortable striking up these conversations. You can talk to Democrats, Republicans, anyone! And you can have some pretty incredible conversations! Here are the main types of interactions I had:

Okay, I’ll be honest, right up front: a lot of people are very creeped out by the fact that you’re texting them on their phone. Their reactions range from cursing you out, to demanding to know where you got their number (voter records, perfectly legal, not subject to Do Not Call Registry), to assuming you’re a robocall and replying “stop”, to politely telling you to remove them from the list. That’s okay, it’s no big deal really, you just remove them from the list, thank them and tell them to have a nice day. I’m kind of perverse, so I sort of enjoy being super friendly and peppy to the people who’ve just rudely told me to eff off.

One thing that quickly became abundantly clear to me was that the vast majority of people have no idea what an Attorney General does, what he’s responsible for. That’s okay, really. If all we end up doing here is educating people, that’s not a loss. So, can Mark Herring reduce traffic on I-95, or make the freeway noise go away, or raise the minimum wage, or stop Trump from building the wall, or impeach Trump (the most common request)? Nope, he can’t do any of that. But I’m sure he’s totally with you in spirit!

Lots of people I texted were either already fans of Mark Herring, or didn’t know his name, but were concerned about all the same things Mark has been working to fix. These people often named protecting voting rights, humane and just treatment of immigrants, and protecting women’s reproductive rights as their most important issues. It’s totally easy to simply cut and paste Mark’s positions (from a document his campaign team has created) into the text box, and let them know that Mark is their candidate, and why. When I can, I like to personalize it a bit with my own story, or why I personally support Mark, but that’s not necessary–I do it more to make the conversations more interesting for myself than anything else.

NOT IN MARK’S COURT VERSION ONE:

Some people I talked to weren’t in Mark’s court because he isn’t as progressive as they want on some issue or issues. Hmm. Okay, full honesty here: I totally empathize, both when it comes to Herring and elsewhere in the ticket. He’s not opposed to the pipelines, and he takes money from Dominion. He’s way too aggressive at pursuing the death penalty. His position on marijuana legalization is a hedge. I kind of dreaded the moment that someone asked me about one of these issues. So why do I volunteer for his campaign if I don’t agree with him? Well, for one thing, it’s too important a position to risk having a Republican in, and for the other thing, Mark earned my respect a long time ago, when he stood up for marriage equality in Virginia (it was such a moving press conference). So I tell the people I’m texting that I understand their feelings, and that no, Mark isn’t as “left” as maybe they’d like him to be, or as I’d like him to be, but that our best strategy right now is to pick the best candidate given our choices (which I think is far and away Mark), and then do all we can to let him know what issues we care about and what positions we want him to take.

NOT IN MARK’S COURT VERSION TWO:

Here’s where it gets interesting. And where texting is really an asset. Because if I went to a door of someone who thinks his most important issue is the 2nd Amendment, he’d politely nod his head at me when I gave my pitch, say nothing, and then thank me and go about his business. But by text….for some reason, he’ll take advantage of the anonymity, and actually tell me that’s his most important issue. Which opens the door for me to follow up, to probe a little. I might ask “just out of curiosity, are there any gun safety laws that you *would* be in favor of?” I’ve had some really interesting conversations this way, with Trump supporters, with Republicans, with Independents. People who’ve complained about fake news, about immigrants, about too much government, about all sorts of things. I don’t think for one second that I converted any of them to Democrats or convinced them to vote for Mark Herring, but I do think that I may have made them listen for a second to another point of view, may have given them some different information about things they had misconceptions about. If nothing else, I was friendly and polite, and tried to draw their attention to things we have in common. We have to keep trying, keep having these conversations, and the texting software has made it so much easier–instead of using the mask of technology to leave horrible anonymous comments on Internet news articles, we’re using it to begin difficult conversations with people who seem to come from very different places.