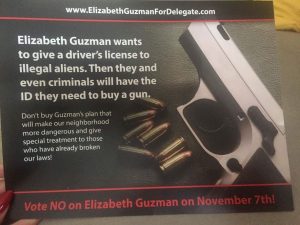 Maybe freedom really is another word for nothing left to lose.

Now that the Republican Speaker of the Virginia House isn’t running for re-election, he clearly feels as though he has the freedom to peddle racist propaganda in the name of helping a fellow GOPer hold on to his seat.

The Dominion Leadership Trust, the obliquely named leadership PAC associated with retiring Republican Speaker Bill Howell, recently paid for two mail pieces dropped in House District 31, where (Daily Kos endorsee) Elizabeth Guzman is challenging GOP Del. Scott Lingamfelter, an eight-term incumbent. District 31 is a Northern Virginia seat that Hillary Clinton won 54-42, and if elected, Guzman would be the first Latina elected to the Virginia General Assembly. Guzman emigrated from Peru as a single mom in search of a better life for her family and once juggled three jobs to make ends meet.

Lingamfelter apparently wants his name nowhere near these mail pieces, which would explain why they were created and distributed under the aegis of this PAC. Check out the mailers and you’ll understand why anyone actually running for office may want to keep his/her distance.

Yeah, so, these are crazy racist.

First, the mail pieces use the term “illegal alien,” a term that’s offensive and dehumanizing. The Associated Press dropped “illegal” as a reference to immigration status from its stylebook years ago, and major publications followed suit. The term is just one of the many racially charged dogwhistles often used to smear members of the Latino community and cloaks racism in a veneer of moral authority while perpetuating negative stereotypes.

Moreover, these mailers are designed to evoke the racist trope that giving driver’s licenses to members of this community would lead to gun violence or voter fraud. It’s dark stuff, and it’s no wonder Lingamfelter’s kept his name out of this stuff. They’re obvious turnoffs to mainstream voters in a district as diverse and competitive as House District 31, part of the rapidly growing and diversifying D.C. suburbs.

The mailer goes on to misrepresent Guzman’s proposal to issue driver’s licenses to all Virginia residents, regardless of immigration status. Such a policy would expand the state’s tax base and increase the number of drivers with auto insurance.

Lingamfelter, by contrast, is stridently anti-immigrants’ rights. In 2011, he sponsored legislation that would require cops to make inquiries into someone’s immigration status upon arrest—a policy championed by none other than crazypants Confederate apologist Corey Stewart. Lingamfelter currently lists no stances on immigration on his campaign website, although he reportedly used to be quite open about his draconian views.

But now Lingamfelter is trying to hide from the racist policy positions in his past, even as a House colleague is funding racist mailers targeting his Latina opponent. This is just the latest instance of Republicans trying to hide who they really are from voters this year, and it’s as bad a sign for GOP incumbents as it is a positive indicator for their Democratic challengers.

The entire preceding was Carolyn’s analysis. Here’s my own commentary on these mailers:

– Delegate Scott Lingamfelter did not want his name or his committee’s name on these mail pieces, so some would like to argue he has no knowledge or connection to these pieces. House Speaker William J. Howell – a close colleague to Lingamfelter – runs the PAC, so it is highly unlikely that Delegate Lingamfelter is unaware of these attack pieces.

Studies show that state who issue licenses to undocumented immigrants have seen hit & run incidents decrease, as well as a decrease in uninsured motorist claims.

– Folks buying guns would still have to go through a background check. We should be looking at our background check laws instead of our immigration laws if we feel that these background checks are not sufficient to weed out potentially-dangerous criminals.

– Regardless, this mail piece plays upon fear and racism – overt and subtle – in order to continue fanning the flames of xenophobia in our commonwealth and our country. I can only wonder if Speaker Howell and his colleagues are confident in their candidates if they have to resort to such tactics. If you think can win on your ideas and the track record of your candidates, why prey upon the anxiety of your constituents?

It’s important to note that this is standard operating procedure for the House Republicans, especially the ones here in Prince William County. The delegates claim plausible deniability by having various leadership PACs and big-money rollers like the Koch-backed Americans for Prosperity send out the racist and inaccurate mailers for them. By using PACs with no one’s name tied directly to them, they deceive voters into thinking they are “good guys who care for everyone” while fanning the flames of racism, xenophobia, sexism and bigotry on the back end.

Delegate Rich Anderson — GOP incumbent of the neighboring 51st district, where I live — has employed similar tactics in the past, and is being helped by the Koch Brothers this year. It’s important for us to get the word out about what’s actually going on, and the importance of defeating these deceptive incumbents this year.

There’s too much at stake this year for us to let these kinds of attacks go unanswered.

David Rothkopf: “Here are a bunch of reasons I have concluded along the way I could never be a politician”