Back in August, I posted this letter from 19 members (Republicans and Democrats) of the Virginia General Assembly, calling on VDOT to “express our opposition to the current design of the shared use path on Interstate 66 (I-66 Trail) proposed by the Virginia Department of Transportation (VDOT) and I-66 Express Mobility Partners (EMP)” and specifically demanding that VDOT “redesign this project to place the shared use path on the outside of the sound walls, ten- feet-wide with two-foot-shoulders on either side, or 14-feet-wide, and extend the shared use path the entire length of the widening project.”

As Greater Greater Washington reported back in June, “one positive aspect” of I-66 widening (a really bad idea overall) is that it will “include a new [bike] trail that effectively runs [from] Gallows Road to Centreville,” and which will “help build out Fairfax County’s bike network, providing connections to the W&OD trail, the Cross County Trail, and others…connect[ing] to the Custis Trail, which runs parallel to I-66 in Arlington, and the result will effectively mean one of the longest trails in the region.”

That should be great news, except for a couple problems. First, the way this project is currently planned, parts of the multi-use trail would run “along the highway side of the sound barrier, the big wall that separates 66 from where people live,” putting trail users “closer to high-speed traffic and farther from the neighborhood connections, which likely means far fewer people would be willing to get out and use it.” Also, putting bike riders next to traffic would, of course, expose them “to more air pollution on the highway side of the wall and force users to breathe in all the extra exhaust coming from the traffic of a widened highway.” Not acceptable.

So why on earth would anyone design a brand new bike trail so that it will be wedged between a busy highway and a sound wall? Seems crazy, but there MUST be reasons, right? I was curious, so I submitted Freedom of Information requests to VDOT and to Fairfax County. The VDOT responses weren’t particularly helpful, but there was some interesting material in the Fairfax County emails.

The main thing I learned is that the seemingly bonkers bike trail design mentioned above can be attributed to a few main factors: 1) the rush to widen I-66 as quickly as possible (presumably for political reasons, at least in part), as is abundantly clear from the content and tone of emails by Virginia Secretary of Transportation Aubrey Layne; 2) strong/vocal opposition by several homeowners along the I-66 expansion path to having a bike trail in their “back yards”; 3) lack of effective political leadership at the local level, such as from Fairfax County Supervisor Linda Smyth (Providence District), whose district includes a looong stretch of I-66, including where the road is being expanded outside the beltway. So, it’s not surprising that Supervisor Smyth is involved – as she should be! – but it IS surprising, reading the FOIA’ed emails, how biased she appears to be against bicyclists. 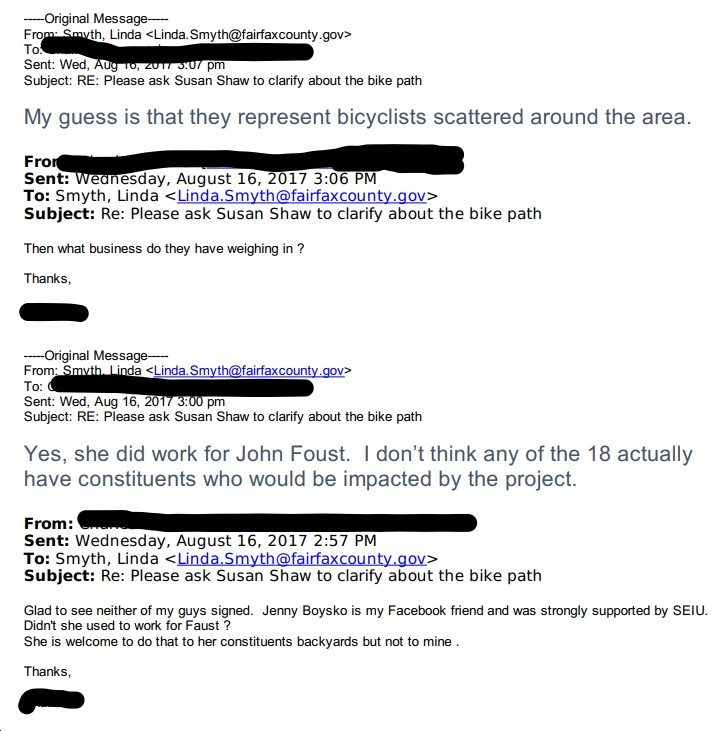 For instance, it’s interesting that Supervisor Smyth claims that none of the Virginia elected officials signing the letter to VDOT “have constituents who would be impacted by the trail.” Does Smyth has no clue who these elected officials are, or who uses bike paths?!? Because what she’s saying is completely false. In fact, almost all the legislators – Sen. Barbara Favola, Del. Tim Hugo, Sen. Jeremy McPike, Del. Rip Sullivan, Sen. Janet Howell, Del. Randy Minchew, Sen. Jennifer Wexton, Sen. Dave Marsden, Del. Ken Plum, Del. Kaye Kory, Del. Patrick Hope, Del. Vivian Watts, Del. Jennifer Boysko, Del. Jim LeMunyon, Del. Charniele Herring, etc. – who signed the letter to VDOT are in districts that either touch directly on I-66 or are located a few miles north or south of I-66. Plus, the concept that nobody in Smyth’s district would use a cool, convenient, well-designed new bike path is just…laughable, frankly.

Also, you’ve gotta love how Smyth ignores the fact that more cars on the road (in part because of fewer cyclists using the bike path due to poor design) would adversely impact her district. And you’ve REALLY got to love how she blows off the many emails/letters/etc. she got from pro-cycling individuals and groups (I included examples, below), while apparently accepting arguments by the ANTI-cycling and “anti-tax” individuals and groups – even advising them on how to fight back, as you can see in one of the FOIA’ed emails below. For instance, how about how Smyth notes – to a constituent who’s hostile to having the bike path on his side of the sound wall – that the “bicycle advocates have been hard at work…[pushing] the advocates’ position for moving the trail to the residential side of the noise wall.” 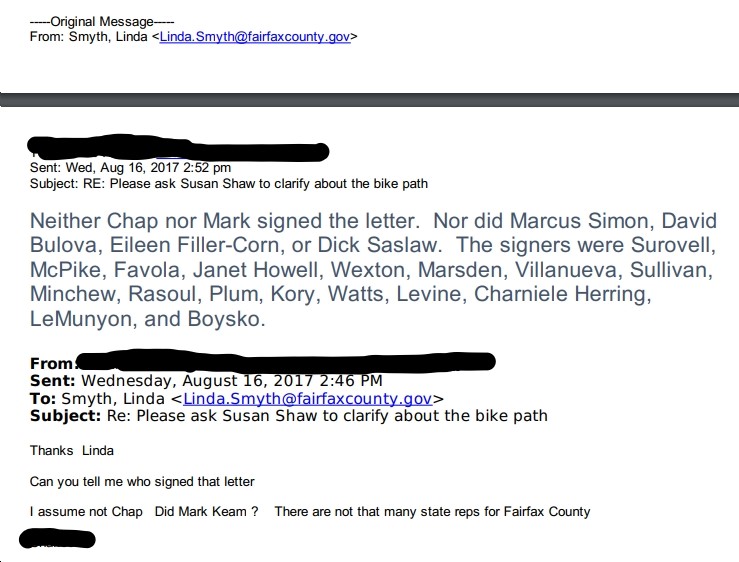 It’s important to emphasize, by the way, that the idea that bike trails bring more crime or lower property values has been repeatedly debunked. For instance, see here (“studies in various parts of the United States seem to show that concerns about trails lowering property values and increasing crime are unfounded”) and here (“This study concludes that crime on bike paths is minimal”; “Opponents to bike path and trail projects often say that property values will be adversely affected but there is not much evidence of this.”) and here (” studies show that crime rates are lower on trails than in other environments…Burglary near trails was extremely rare, more so than other crimes.”).

The bottom line with agreeing to the bizarre concept of wedging a bike/pedestrian trail in between highway traffic and a sound wall is that: 1) it’s horrendously bad design (e.g., being closer to the vehicles means more cancer-causing pollutants sucked into cyclists’ and pedestrians’ lungs; it’s also not going to be attractive for cyclists or pedestrians to use); 2) it sets a terrible precedent, as VDOT is setting itself up for future Virginia highway widening projects also caving and settling for a badly sub-optimal design (needless to say, the process shouldn’t work this way); 3) it reinforces and validates criticisms of Fairfax County as being unfriendly/lacking focus when it comes to environmental protection, encouraging biking and walking, etc.; and 4 ) it’s unclear why they can’t just narrow the lanes by a few inches at each choke point instead of taking more land. 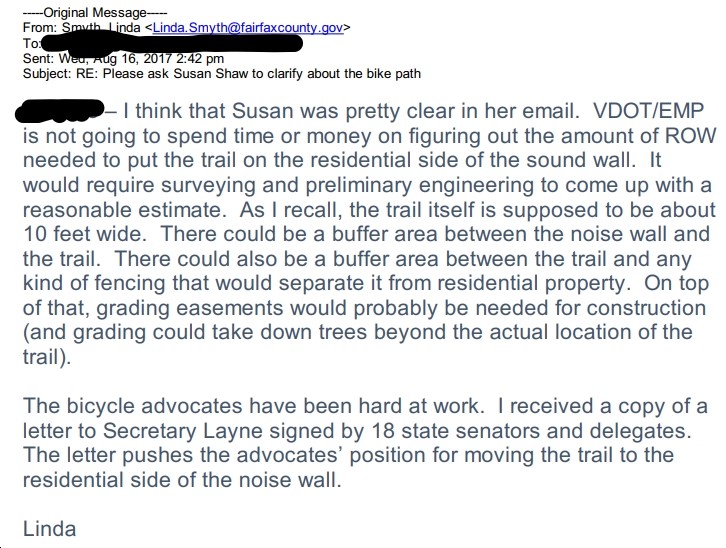 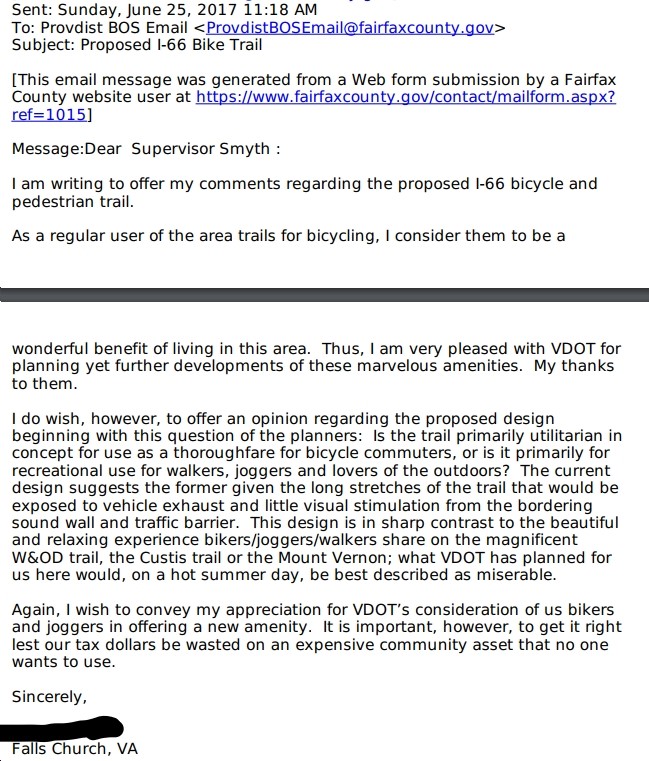 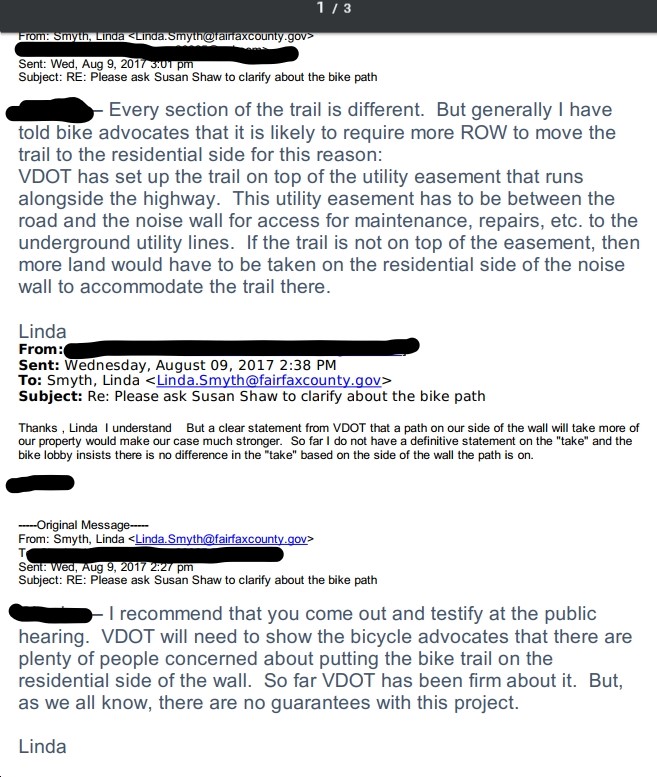 Sen. Scott Surovell (D-Fairfax) sent me the following statement (bolding added by me for emphasis), with which I strongly agree.

The segments of I-66 with the trail on the wrong side of the soundwall are not likely to be rebuilt for another 40 years and this is our only chance to do this right.  I am disappointed that a handful of homeowners’ desire to view a soundwall instead of a bike trail seems to trump the health, safety and convenience of thousands of Virginians.

Experience around the world has shown that when high-quality cycling alternatives are creative, people take advantage of them.  We will never develop a true multimodal transportation system or begin to alleviate our congestion so long as Fairfax County and VDOT continue to view cycling facilities as afterthoughts, luxuries, or exotic curiosities.

In sum, there’s really no excuse for not building a world-class (attractive, safe, aesthetically pleasing, convenient, etc.) bike path along with the expansion of I-66. In coming months, local officials need to work with state officials and others to get this right before the region ends up making a mistake that will cause harm for decades to come…

P.S. There were lots of emails opposing the HOT lanes and/or supporting better transit, smart growth, etc. For instance, see below. 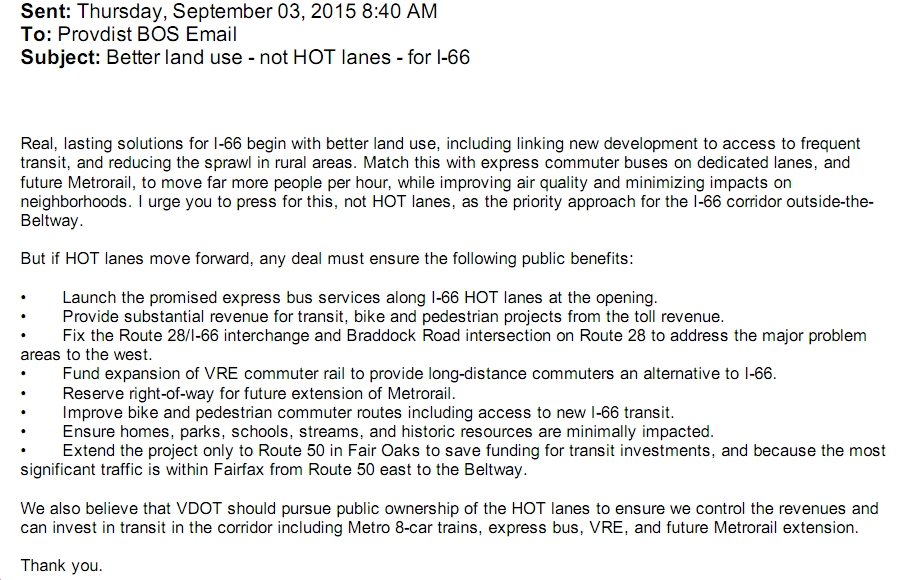 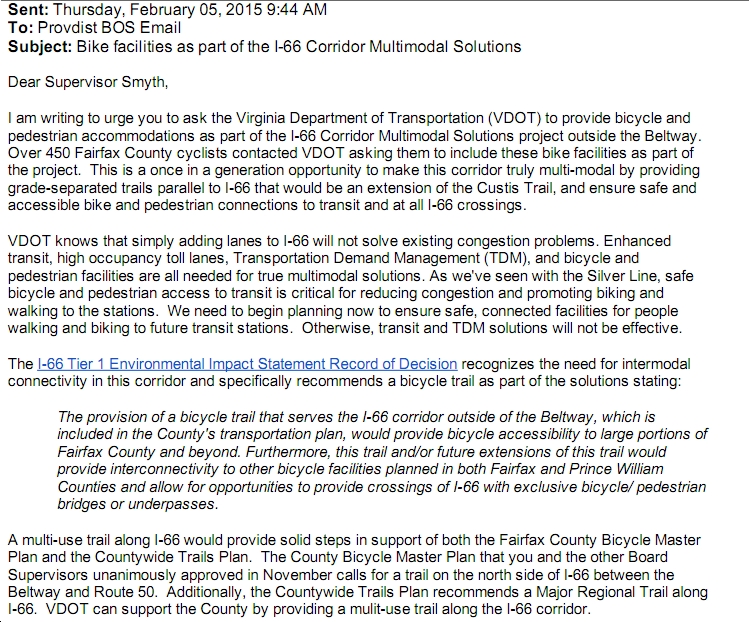 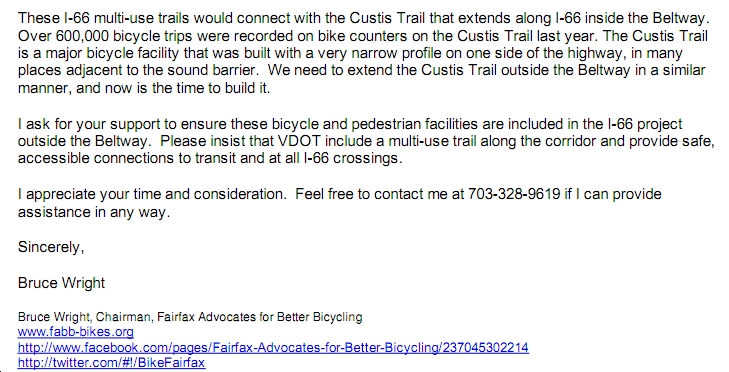 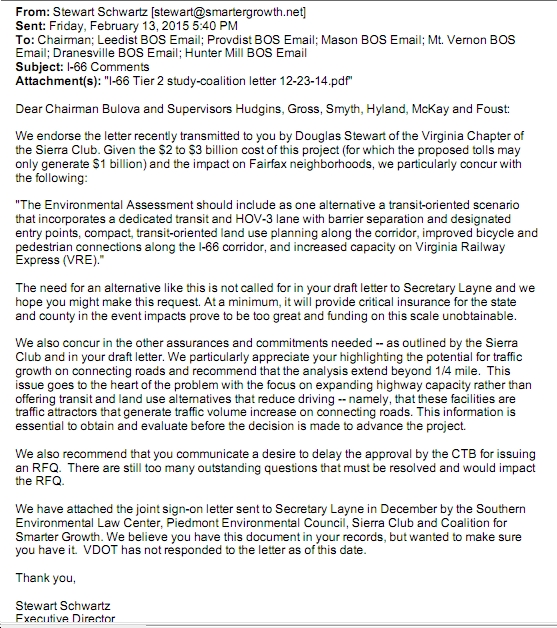