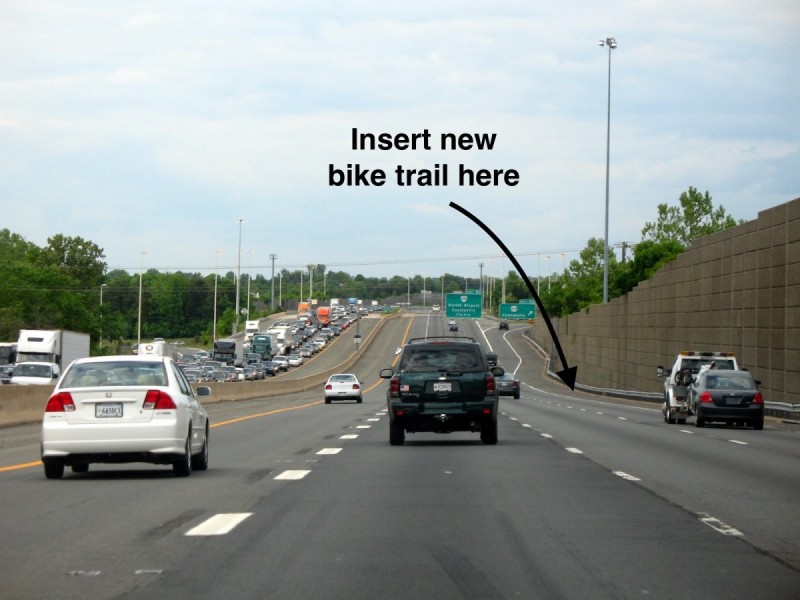 Thanks to Del. Kaye Kory for sending me this; I strongly agree! I’d add that anyone who thought it was a good idea to jam a bike/pedestrian right next to car and trucks on I-66 seriously needs to have their heads examined. WTF???

Re: I-66 HOT Lanes Shared Use Trail Objections

We are writing to express our opposition to the current design of the shared use path on Interstate 66 (I-66 Trail) proposed by the Virginia Department of Transportation (VDOT) and I-66 Express Mobility Partners (EMP).

As detailed in a recent Washington Post story1 and reflected on VDOT’s public website, the current design proposes putting shared use paths between the sound wall and traffic, separated by a jersey wall and fence for the vast majority of the trail. We believe this is an insufficient design for numerous reasons.

First, these paths will not create a high-quality experience for I-66 Trail users including cyclists, runners, walkers or other users. I-66 Trail users will be closely sandwiched between a sound wall and traffic exposing them to concentrated quantities of car exhaust, noise pollution and road debris. A southern adjacent sound wall will obstruct sunlight, limit snow and ice melt, and, without guaranteed snow removal and regular street sweeping, the path will be unsafe due to road debris and weather.

Second, this design is inconsistent with the current layout of both the Custis Trail and the Washington and Old Dominion Trail where they run next to I-66. This design is a break with current VDOT practice.

Third, this design will require breaks in the sound wall at least every quarter mile for community connections and where the trail leaves the inner sound wall alignment requiring overlapping sound walls. This will increase the cost of the project for taxpayers and is not justified by any reasonable design needs.

Fourth, it appears that the current design proposes an eight-foot-wide path in certain sections. Shared use paths must have a minimum tread width of ten feet to comply with American

Association of State Highway and Transportation Officials (AASHTO) standards and twelve to fourteen foot widths are recommended. Placing a wall or fence adjacent to a path effectively narrows the pathway by two feet on that side. Thus, the paved path should be at least fourteen feet wide or incorporate two two-foot shoulders when both sides are immediately adjacent to a wall and/or fence. Eight-foot paths do not create sufficient space for shared use paths and increase user conflicts and injuries.

Fifth, as far as we are aware, this project is the first in Virginia to utilize shared use paths (1) in connection with a public private partnership and (2) alongside a long-established interstate highway not involving bridge crossings. Creating a new VDOT design precedent by placing a narrowed shared use path between the jersey wall and traffic will create unnecessary conflict in projects statewide as we move towards a new multimodal system.

Lastly and critically, it is imperative that VDOT and EMP commit to constructing a shared use path the entire length of the project with grade separated crossings at all road crossings. The plan to construct a multimodal facility that only extends through VA-28 is shortsighted and conflicts with the intent to address congestion caused by cars. Prince William County deserves high-quality cycling facilities, and extending the shared used path to Gainesville would facilitate bike commuting, especially to access I-66 transit and ridesharing lots, and could even reduce parking overcrowding at the Vienna Metro.

We are aware that certain homeowners are disappointed with the road widening and the possibility of the I-66 Trail. While change may be difficult and the potential disruption caused to homeowners is an unfortunate consequence of any road widening, the experience with the Washington and Old Dominion Trail, which opened in 1974, has shown the presence of the trail facility enhanced property values in proximity to the path and did not cause significant negative externalities.

In fact, in the 1970s, communities that objected to I-66 being constructed inside the Beltway saw the shared used trail as a positive addition to that project. In one Washington Post article, a neighboring homeowner was cited:

She is resigned to the coming of I-66. – The construction will be unpleasant, but there are some good things about this, no trucks and car pools and the bicycle path. We feel there has been some sensitivity in the highway department,” she said as she played with her infant son Cyrus on their porch.2

Experience has repeatedly proven that trails are assets to their surrounding communities. For example, after the Washington and Old Dominion Bike Trial was constructed, one neighboring homeowner was quoted:

“It’s terrific. Our kids learned to bike on it and they use it all the time . . . in fact it’s the only safe place for them to bike,” said Sheila Johnson who lives 20 bike lengths from the

2 Paul Hodge, “Walking the route of I-66: The people still wait; I-66: ‘It’ll be the end of family birdwatching’ Contemplating a superhighway in the backyard; ACT: Fighting bulldozers in the courts,” Washington Post (July 21, 1977)

trail at 801 Lincoln St. “We’ve ridden all the way into Arlington on the trail and think it’s a great addition to the neighborhood.” 3

Our general position is supported by:

As you know, multimodality is one of Governor McAuliffe’s three designated Enterprise Strategic Priorities for the Commonwealth’s transportation goals. If Virginia, especially in its most congested areas, is going to move to a true multimodal transportation system that encourages commuting by all modes of transit, it is imperative that VDOT provide non-vehicle users with a high-quality transportation experience so the facility’s use will be maximized. The I-66 Trail’s current design does not do that.

Interstate 66 is used by millions of people and project design requires input from stakeholders throughout the area and – given the precedents being set in this project – throughout the entire state. VDOT and EMP need to have a fuller discussion with all stakeholders before finalizing a design that solely maximizes the feedback from adjacent property owners. There are broader regional and statewide interests at stake in this project. 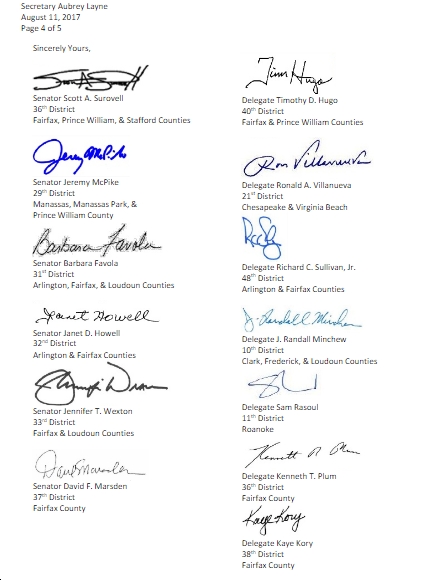 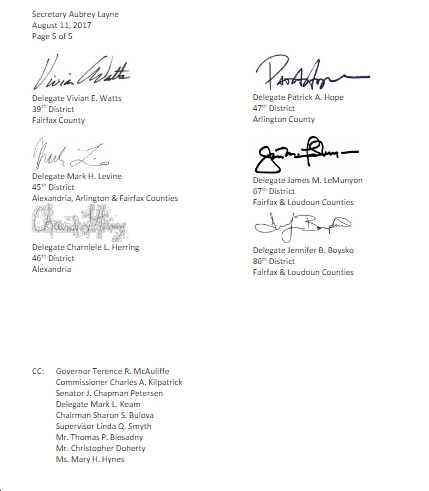 A Twitter account which spews out verifiable, demonstrable, wild lies 24/7 desperately claims that the WaPo is lying (which it absolutely is NOT!) about insane, 100% false comments, by the extremist VA07 GOP(Q) candidate, that WE HAVE ON TAPE! LOL https://bluevirginia.us/2022/07/saturday-news-ukraine-has-exposed-russia-as-a-not-so-great-power-cassidy-hutchinson-vs-the-mob-like-maga-goons-were-being-hurled-back-decades-thanks-to-extremist-supreme-court#comment-5905182402

Bottom line: if people don't vote this November, or vote GOP for whatever reason (e.g., "gas prices," which are mostly the fault of Rs for keeping us addicted to oil - and also Trump's pal Putin), we can kiss our democracy goodbye... https://bluevirginia.us/2022/07/saturday-news-ukraine-has-exposed-russia-as-a-not-so-great-power-cassidy-hutchinson-vs-the-mob-like-maga-goons-were-being-hurled-back-decades-thanks-to-extremist-supreme-court#comment-5905144740 h/t @progressive_va