Katherine White of Fairfax, Virginia didn’t think she could get any more disillusioned by the Republican Party than she had in the first six months of Trump. She recently graduated with a Masters Degree from George Mason University, and after organizing for the Women’s March, immediately co-founded the grassroots group Network NoVA and started working on the 2017 Virginia election.

The policy differences between the two parties — and the prospect of no firewall in the Virginia Governor’s office to provide a veto to the Republicans more outlandish legislative maneuvers — has kept her canvassing almost full-time this summer and fall. Candidates she’s canvassed for include Donte Tanner, Kathy Tran, Tia Walbridge and others. She’s also kept busy hosting fundraisers, phone banking and posting to social media.

However, when Ed Gillespie posted his scurrilous ad accusing Ralph Northam of supporting the MS-13 gang because of a vote on sanctuary cities that don’t even exist in Virginia, it altered her commitment to the race. The ad, of course, isn’t factually accurate. She knew it wasn’t true. She knew Ed Gillespie knew it wasn’t true. And it was so far from honest, it changed the race for her.

She decided she needed to do more and express in any way she could what Ralph’s “gangs” looked like. She asked for pictures of Democratic candidates and supporters canvassing. She pitched her idea to media companies, public relations firms, party activists. She couldn’t get anyone to listen. Then she decided to produce a video and get her message out herself.

In sum, Katherine White is the definition of a grassroots activist. She has listened to the party leaders and is working very hard to elect them. She is also listening to her heart, and when she finds something astray, she will let nothing and no one stand in her way until she finds a way to set it right. Ralph does indeed have some “gangs” and he, and Katherine, could be responsible for changing the meaning of the word. Her video can be found below. 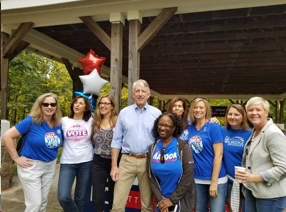