I’ll keep adding more interesting ones as I see them, but the bottom line is that this should be a big boost for Ralph Northam with just over four weeks to go. Let’s hope Trump keeps up his racist, inflammatory, insane tweeting in support of his pal Ed Gillespie! 😉

.@RalphNortham is a decorated Army veteran. He served 8 years of active duty. For a Commander in Chief to levy this false smear is shameful. https://t.co/rACOOrgORg

Thanks! This should help Ralph Northam a lot. Gillespie is now endorsed by a crackpot. https://t.co/kWyxUlD4ML

Trump is attacking Ralph Northam. The best way to fight Trumpism today is to donate and support Northam https://t.co/Ow3pPJ1YYt

Ralph Northam is a veteran who served his country with honor and you are a twitter commando who embarrasses our country every single day. https://t.co/Yhry4EpX1D

It would be really cool if the President’s tweet caused Ralph Northam to raise a lot of money tonight. https://t.co/nGWpeBVxug

Northam has been having trouble getting national attention. https://t.co/JuEt8af6He Trump spotlighting him like this doesn’t exactly hurt. https://t.co/U0DRwPblIx

Donate to Northam, the guy Trump has to lie about, here: https://t.co/yUFHKEHBMK
I think VA has had enough of Trump’s lies about violence. pic.twitter.com/eetJ8YTcMs

If you want a sense of how Trump plans to approach 2018 midterms, here you go.
PS – Northam leads Gillespie by 6 pts less than a month out. https://t.co/NXsf4G5EUQ

Nice of Donald Trump to give Northam a fundraising tweet.

Hello Virginia you have an excellent opportunity to make this terrible person very sad. https://t.co/iNw6vre4Jl

Excellent, this will be a big help to @RalphNortham and @vademocrats – please keep these tweets coming! 🙂 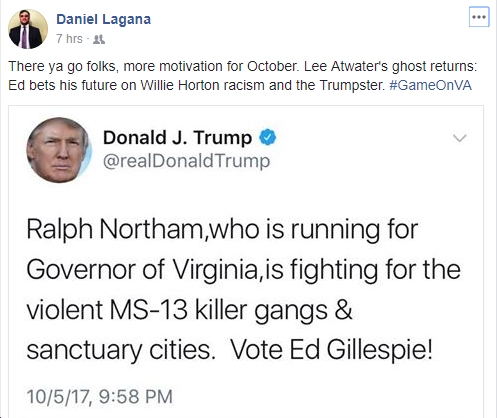 Great way to start your day is to troll Trump by donating to @RalphNortham in honor of his latest hate tweet… https://t.co/7ZrdAI4laD https://t.co/AIVxWxeFzP