The following is from the brilliant Kenton Ngo, one of the original Virginia Democratic/progressive political bloggers, now with the Progressive Change Campaign Committee (PCCC). Fascinating chart and analysis, huh? And we wonder why Republicans are so hell-bent on suppressing the votes of minorities? Hmmmm…gee. – Lowell 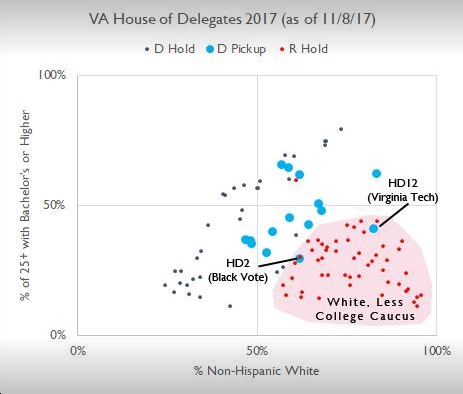 Anyone in the GOP Wedge of Doom on this chart — significant presence of college-educated whites and/or minorities — is quaking in their boots.

College-educated whites, stunned by Trump, are finally voting for Democratic delegates alongside nonwhite voters (who have been reliably Democratic) all the way down the ticket instead of splitting.

Well just look at that: another leading insurrectionist - and one of the worst people in America, period - Rudy Giuliani is gung ho for Glenn Youngkin! https://bluevirginia.us/2021/10/looking-forward-to-hearing-glenn-youngkin-defend-trumps-malevolent-spiteful-narcissistic-statement-about-gen-colin-powell#comment-5577214780