In comparing 2017 to 2013 results for Virginia House of Delegates races, I wasn’t sure anything interesting would pop out, but as it turns out, it very much did.

But fortunately…what a difference four years made!  See below the graph for more on that dramatic story… 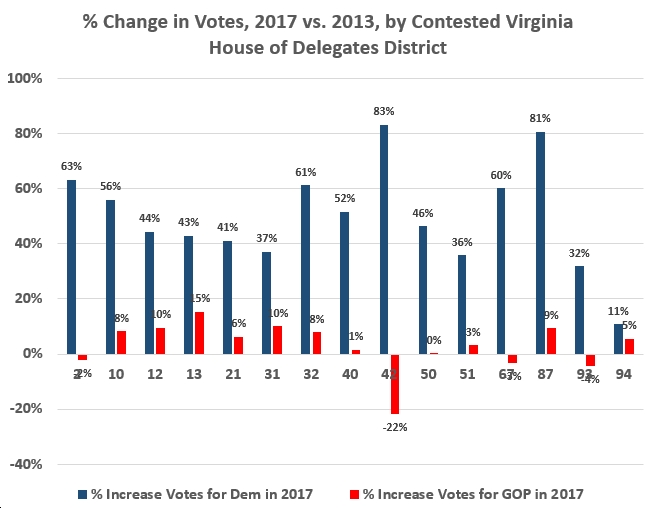 What caused such a dramatic turnaround for the “blue team?” First and foremost, Donald Trump is now “president” (loosely speaking), and that: a) helped motivate a slew of talented Democrats to step up and run; b) helped motivate many others to step up and take a lead in “the resistance” to Trump; c) drove Democratic turnout up sharply compared to 2013, while Republican turnout increased by a much smaller percentage.

In short, the increase in Democratic turnout in House district after House district massively outpaced the increase in Republican turnout (e.g., 9:1 in the 87th; 52:1 in the 40th; 7:1 in the 10th, 21st and 32nd; 12:1 in the 51st). The 42nd district is particularly striking, in part due to the excellent campaign by Kathy Tran, but also because the popular incumbent in that district (Republican Dave Albo) resigned, and because the Republican nominee (Lolita I. Mancheno-Smoak ) was…uh, let’s just say a bit “off.” The 87th, where Del. John Bell was defending his seat against a well-funded Republican opponent (Subba Kolla), also jumps out. Most likely, what happened here was a combination of the fact that in 2013, Bell ran against a fairly popular incumbent, Republican David Ramadan, while this time he was a well-funded and popular incumbent himself. The one district that sort of surprises me is the 94th, where turnout for the Democratic nominee (Shelly Simonds) only increased 11% from four years ago. Of course, the Democratic nominee four years ago (Rob Farinholt) was a strong candidate, and it seems that the incumbent Republican (David Yancey) is fairly popular there, leading to what is essentially a dead heat (with a pretty good chance that Simonds will pull out the win in the end) heading into the recount… 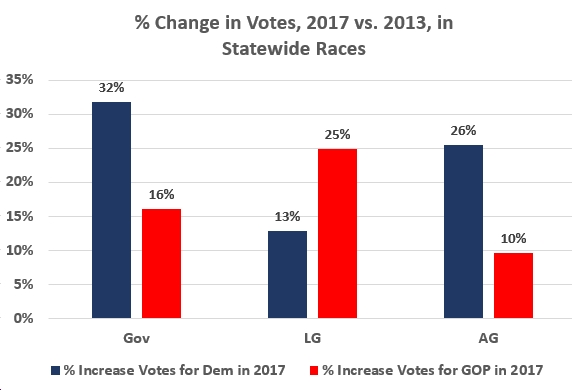 I included the above chart mostly to place the House of Delegates numbers in context – note the 32% increase in votes for the Democratic candidate for governor in 2017 compared to 2013, and the 26% increase in 2017 votes for the Democratic AG candidate (Mark Herring both times) compared to 2013. The surprise, at first glance, is the LG race, where Republican votes actually increased twice as much as Democratic votes compared to 2013. However, consider who the Republican nominee (EW Jackson) was four years ago – a very poor candidate who lost badly (11 points) to Ralph Northam – and perhaps that helps explain things a bit. Also, even thought Jill Vogel ran a nasty, far-right campaign that wasn’t substantively much different than EW Jackson’s, she was well funded and an experienced politician. Both those things almost certainly helped her. 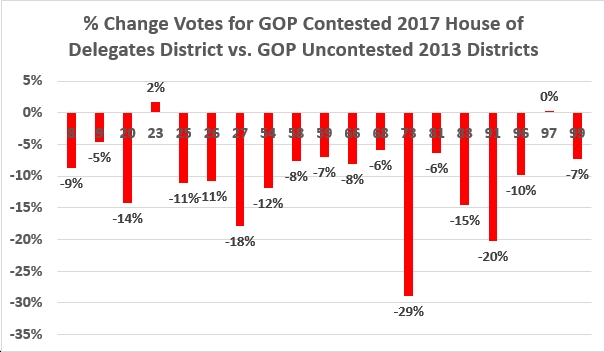 Finally, the above graph looks at House of Delegates districts that were not contested by Democrats in 2013, but which WERE contested this time around. Note what happened to Republican turnout in every district other than the 23rd and 97th – it went down, by as much as 29%, but mostly by around 5%-15%. Now, Republicans still managed to win most of these districts, but they did lose two of them – the 68th (Manoli Loupassi to Democrat Dawn Adams; note that Loupassi’s vote total dropped by just 6% from 2013, so this was mostly a case of Dawn Adams winning it rather than Loupassi losing it) and the 73rd (John O’Bannon to Democrat Debra Rodman; note that O’Bannon’s vote total dropped 29% compared to 2013, from 19,405 to just 13,803).

The overall conclusion on the more “red” districts seems to be that it makes sense for Democrats to “run everywhere,” especially with a super-unpopular Republican in the White House. I’d also note that running Democrats in as many districts as possible does a couple other things: 1) forces Republicans to spend money everywhere and “stick close to home,” rather than helping Republicans in tougher districts; 2) gives voters in those districts a real choice in who they want to represent them, while letting everyone in the district know that there’s not just a ruinous/far-right alternative, there’s also a positive/progressive one.