Seriously, every single one of these @#$@#!s needs to go next November. In approximate order of political vulnerability, here are the Virginia House Republicans who voted for the GOP tax monstrosity today. Also see below for statements as they come in…

Beyer Statement On Passage Of GOP Tax Cut For The Rich

“I am adamantly opposed to the House Republican tax bill, H.R.1. The bill will raise taxes on millions of middle class Americans in order to fund tax cuts for the wealthy, and yet still manages to explode the deficit. We have an opportunity to enact tax reform focused on the prosperity of hard working Americans, which simplifies the tax code and is fiscally responsible. Unfortunately the GOP has opted for a bill in which right-wing ideology and magical thinking trump common sense and sound economic policy.

“The fiscal irresponsibility of this bill will hamstring efforts to invest in our future, to fix our infrastructure and to educate a twenty-first century workforce. It will lead to cuts to Medicare and other programs that are critical to millions of Americans. The bill contains giveaways for heirs of massive estates and the idle rich, yet punishes students and the very ill. How is that fair? How does that make sense? How could any Member of Congress vote for this?”

The nonpartisan Tax Policy Center estimates that by 2027 the wealthiest 1 percent of Americans would receive half of the total tax benefit, while nearly a quarter of American households see a tax increase.

The bill passed with bipartisan opposition, and the final vote was 227-205.

“Congress had a real opportunity to pursue revenue neutral tax reform that would lower corporate rates and benefit the middle class. That is why I am deeply disappointed that the majority has instead elected to pursue a partisan tax plan that asks working families, veterans, and low-income seniors to pay higher tax rates than the wealthiest Americans and largest corporations. As a leader of the New Democrat Coalition, a group of pro-business Democrats, I have written on several occasions to Speaker Ryan and Chairman Brady asking them to partner with us on a tax reform plan that would simplify the tax code, create revenue for infrastructure, and provide middle class tax relief. However, much like their Obamacare repeal gambit, the Republicans in Congress are pursuing a deeply partisan proposal instead of working across party lines on bipartisan solutions.

“I cannot support the plan before us today because it explodes the annual deficit and hurts Northern Virginia families in order to provide a massive windfall to the top 1 percent of earners.

“The bill increases the deficit to the tune of $1.5 trillion over ten years. The nonpartisan Joint Committee on Taxation found that Republicans are asking the American people to stomach a massive deficit increase on the hope and prayer that these tax cuts will pay for themselves. They won’t. This is the same trickle-down narrative Republicans sold to rewrite the tax code in 1981, 2001, and 2003. The 1981 tax cuts were so disastrous that Presidents Reagan and Bush had to enact legislation to raise additional revenue in 1982, 1983, 1984, 1987, and 1990. And in the early 2000s, President Bush took the record surpluses of the Clinton era and created record deficits.

“The plan includes a partial repeal of state and local tax (SALT) deduction. The deduction for income and sales taxes is repealed, and the deduction for property taxes is capped at $10,000 per household. Although, there are reports that the Senate will repeal SALT entirely. In the Commonwealth, 1.5 million households claim $16.5 billion in SALT deductions. Virginia has the nation’s 4th highest percentage of tax filers claiming a SALT deduction (37%). The 11th District, where 50 percent of tax filers claim a SALT deduction, is one of the top Congressional districts in the nation affected by this change (11th), and 75 percent of our district’s SALT claimants are in the middle income tax brackets. 280,000 households claim this deduction in Fairfax County alone, for an average deduction of $16,535. The bill also caps the mortgage interest tax deduction, which currently saves an average of $2,946 for 144,000 of my constituents, and it eliminated the student loan interest deduction which is claimed by more than 30,000 VA-11 residents for $35 million in deductions.

“Additionally, the tax plan includes the elimination of all deductions for medical and dental expenses, including prescription drug costs, premiums for long-term care insurance, payments to doctors, in-home care, and even nursing home care. In the 11th District, in a given year more than 24,000 tax filers claim medical and dental expenses, totaling roughly $260 million in deductions. This proposal would be catastrophic for the sickest and most vulnerable among us. Those who suffer from a chronic or serious medical condition, are disabled, or need in-home or in-facility medical services for themselves or a loved one will find it even more difficult to afford necessary medical care. I offered an amendment to the bill to restore this important deduction, but Republicans in the Rules Committee refused to even allow for the amendment to be debated on the Floor of the House.

“This bill would also inflict significant harm on our ability to make infrastructure improvements by prohibiting the issuance of tax exempt bonds for so-called private purposes. The repeal would cost my local airports authority, the Metropolitan Washington Airports Authority, $300 million in additional financing costs for its ten-year capital construction program. Many of my colleagues have probably benefited from jumping on the HOT Lanes in Northern Virginia. Well, the I-495 HOT Lanes required $589 million in private activity bonds and the I-95 HOT Lanes received $253 million. I served in local government for 14 years. We use these bonds to partner with the private sector to build roads, tunnels, transit, and build affordable housing. The repeal of private activity bonds exposes Republicans’ insincerity about making vital national infrastructure investments.

“Finally, this plan does not reflect our values and priorities. According to the Tax Policy Center, the after-tax income of the top 1 percent of earners would rise by 2.6 percent in 2027. By contrast, groups in the bottom 80% of the income distribution would see their after-tax income increase by between 0.0% and 0.6%. The top 1 percent would receive more than 50 percent of the benefits of the Republican tax plan by 2027, while 36 million middle income Americans would see a tax increase! The bill would repeal the estate tax, which applies to only the wealthiest 5,000 decedents each year, while nixing the student loan interest deduction and the tax credit available to small businesses that make investments to improve accessibility for individuals with disabilities.

“We can and should do better than this. We need a balanced approach to comprehensive tax reform that establishes a simpler, fairer tax code for all. This is a tortured version of the vision even Speaker Ryan laid out for tax reform. It is not revenue neutral and the cuts that it does include are not even permanent. I encourage my colleagues to oppose this bill.”

“H.R. 1 raises taxes on more than 30 million hardworking middle-class families to fund massive tax cuts for the top one percent of Americans. Big corporations and the wealthy few will get richer on the backs of low-and-middle class families. If enacted, it would increase the deficit, bankrupt the middle-class, and blow an enormous hole in the federal budget — leaving us without the funds we need for job-creating investments in infrastructure, education, healthcare, and many other priorities.

“Provisions in our current tax code help students manage their loans; help families cope with medical debt; help teachers buy supplies; and supports small businesses that hire veterans. This bill slashes or eliminates those incentives, and uses the ‘savings’ to repeal the estate tax for the rich. I am appalled to see Republicans treat middle-class families like a piggy bank.”

Comstock Votes to Raise Taxes on the Middle Class

“Barbara Comstock just voted for a brutal tax hike on middle class families and homeowners in Northern Virginia in order to give huge breaks to the ultra-rich and big corporations. By gutting the SALT deduction, reducing the ability to write off student loan debt, capping the mortgage tax deduction, and eliminating the medical expense deduction, this bill hits NOVA harder than any other area in the country,” said State Senator Jennifer Wexton.

“Barbara Comstock has shown us again she stands with Speaker Ryan and Donald Trump and against the interests of her constituents in Northern Virginia. I have no doubt that next November Northern Virginia is going to hold Barbara Comstock accountable for this inexplicable vote and replace her with someone who will fight for them,” said State Senator Jennifer Wexton.

Cullop: Garrett And Congressional Republicans Have Handed A Win To The Ultra-Wealthy And Big Corporate Special Interests At The Expense Of America’s Working Families

“Tom Garrett and Congressional Republicans have handed a win to the ultra-wealthy and big corporate special interests at the expense of America’s working families. America needs real tax reform that will strengthen the middle class and support small businesses. This plan cuts taxes for the ultra-rich and big corporations at the expense of the middle class, students, people trying to pay big medical bills, and saddles future generations with our debt. It just doesn’t make sense. The folks in the 5th District deserve to know why Mr. Garrett supported this misguided proposal. He needs to provide an honest explanation to his constituents.”

Ben Cullop is a 4th generation Virginian who received his undergraduate degree and MBA from the University of Virginia. He built a successful career investing in communities and businesses across Virginia. He serves his community as a member of the advisory board of the UVA Children’s Hospital, the Albemarle County Police Foundation Board, and previously, the Charlottesville Retirement Commission. Ben lives in Albemarle County with his wife, Ashley, and their two young children.

This week House Republicans passed a tax bill that will hurt middle class families and small businesses. As the Senate considers a similar bill in the coming weeks, here’s where I stand.

I have major issues with proposals in the Republican tax plan. Their plan tilts benefits heavily to the wealthiest few, while estimates indicate millions of middle class families and small businesses will face a tax hike. It would be particularly bad for Virginia by repealing or limiting important provisions to the Commonwealth, such as the state and local tax deduction and the Federal Historic Tax Credit, a program that has brought investment and helped renovate historic buildings in Virginia towns and communities. The bill is also a deficit buster; three former defense secretaries have said that this tax plan jacks up the national debt so much that it would make it harder for the Pentagon to make future investments in our national defense. Lastly, Senate Republicans have decided to include a provision that would repeal the Affordable Care Act’s individual insurance mandate, which would cause higher health care premiums for Virginians and an estimated 13 million fewer Americans with insurance.

This isn’t how we should be doing tax reform. I would support a bill that prioritizes middle class Virginians and small businesses, but this plan does the opposite. Republicans should drop this partisan effort and work with Democrats on a bipartisan tax reform bill. 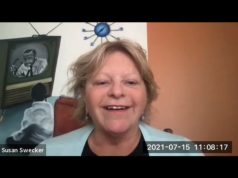