I’ll add more comments from Virginia’s Congressional delegation as I see them. For now…check these out. My thoughts: lock up all the criminals – and there are MANY – in this corrupt, treasonous administration, starting with Trump, probably Pence and on downwards. The jails are going to be full, might want to clear out some non-violent drug offenders to make room! LOL

Michael Flynn “will get the benefit of a fair legal process he was unwilling to accord to anybody else,” Sen. Tim Kaine says; Kaine says it is “frightening” Flynn served as national security adviser https://t.co/gRwWFkETKe pic.twitter.com/HY2yxrvnag

Asked about Flynn being directed by a senior Trump official, Warner said: “I’m anxious to hear what happens with the — for those who’ve felt for a long time that we had more questions that answers, we may be starting to get some of those answers.” 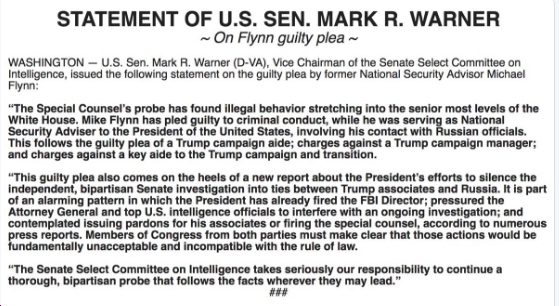 Video: Trump’s Former Chief of Staff, Who Helped Trump Try to Subvert the 2020 Election and Stay in Power, Now “Working With” VA House GOP Leader Todd Gilbert About This November’s Elections (Meadows pledges that Trump WILL BE INVOLVED in this election.) https://bluevirginia.us/2021/07/video-trumps-former-chief-of-staff-who-helped-trump-try-to-subvert-the-2020-election-and-stay-in-power-now-working-with-va-house-gop-leader-todd-gilbert-about-this-novembers-elections

Also, shame on those Rs (e.g., Glenn Youngkin) who are "honored" to accept this insurrectionist/traitor's endorsement, and those (e.g., VA House Rs, Senate Rs) who stay silent https://bluevirginia.us/2021/07/friday-news-delta-variant-has-changed-the-war-against-covid-19-how-biden-got-the-infrastructure-deal-trump-couldnt-heres-how-the-media-can-cover-republicans-responsibly#comment-5475727671