Superb letter from a Blue Virginia reader to DEQ re: the proposed Mountain Valley and Atlantic Coast Pipelines…thought I’d pass it along! – Lowell

I have recently found out that the VA State Water Control Board will be holding meetings within the next few days to determine permit applications on two pipelines that natural gas companies endeavour to lay through the state of Virginia: the Atlantic Coast and Mountain Valley Pipelines.

I am writing to you today to voice my unequivocal opposition (and that of many of my fellow Virginia residents) to these projects and ask you to DENY these destructive and unnecessary pipelines.

These projects would destroy our environment, wildlife, pollute our air and water, ultimately leaking constantly as ALL other such pipelines. The health of the residents and our children, as well as the irreplaceable wildlife of our state, would be sacrificed for fracked gas that would often not even be used for Virginia homes, as much of this this gas is to be exported[1].

The natural gas companies and their investors will ultimately be the sole beneficiaries in a scheme that will force the rest of the Virginia residents to shoulder the colossal monetary, environmental, and health costs of such a destructive decision.

With the Atlantic Coast Pipeline cutting out the heart of the state, and the Mountain Valley Pipeline eviscerating the state’s southwest corner, the two pipelines would, together, carve through hundreds of waterways, crossing rivers, creeks, and other surface waters almost 1,700 times and threatening national forests, drinking water sources, endangered wildlife, and local farms and communities. Many of these locations have NOT been reviewed by the state- instead the state has simply elected to “cede authority to review hundreds of places where the pipelines will cross waterways”. The projects will massively increase Virginia’s carbon footprint, and destroy protected wilderness areas, as well as state and federal parks. Included in the pollution and habitat destruction is the requirement for mountaintop removal, the impacts of which are detrimental to the area.[2]

While the corporations stand to benefit from tax breaks and are assured a profit, the environmental and safety risks of the pipelines will be absorbed by the communities they pass through and by everyone affected by the rapidly changing climate and the devastation created when those pipelines leak and burst.[3] (see diagram below) 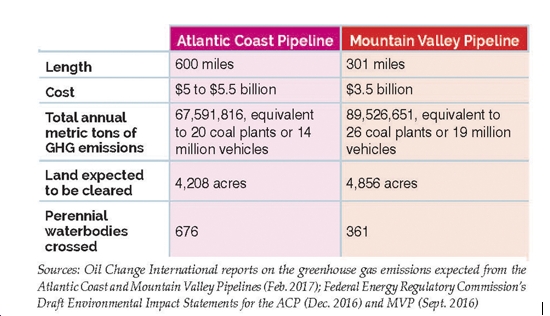 When safety of the pipelines is discussed, it is clear that these pipelines leak constantly. The corporations and government have made it clear that this cannot be avoided- ever. During construction, toxic chemicals are added to keep rights of way clear that can impact local surface waters and leach into groundwater.[4]

However, this is not the only safety problem. Pipelines can often explode, as exemplified in the pipeline “breach” near Appomattox, Virginia in 2008. In this ‘blowout’, a fireball reported to be ¼ mile high, injured five residents (including three who suffered second and third degree burns), destroyed two houses and damaged 95 more.[5]

When it comes to the homes and land of Virginia residents, an additional problem is the negative impact on property values, insurance, and mortgages. The Forensic Appraisal Group LTD found that the negative impact of the Atlantic Coast Pipeline on property values could be “up to 30% or more” and that the presence of a 42 ­inch, high pressure natural gas pipeline could lead to insurance and mortgage issues.[6] These companies will additionally be allowed to encroach upon and seize residents’ private land.[7]

While there have been some analysis performed in relation to the pipelines, it is clear that the analysis done on their effects has been extremely flawed and devoid of facts. Many factors were not taken into consideration at all.[8]

There have been some arguments that the pipelines will bring jobs and “commercial activities associated with the development of the pipeline”[9] to Virginia- and that this is the reason why it is worth destroying our state for these projects. However, facts very quickly disprove this argument. The majority of the jobs created and ‘benefits’ seen will be extremely short lived and gone within a couple of years. “Any large-scale employment during construction is short-lived, and these jobs may or may not go to local residents who need them. Projected long-term employment numbers for operating the pipelines and compressor stations are significantly lower than during the construction phase.

Compare this with jobs in the solar sector: employment in Virginia is strong, North Carolina is booming and West Virginia has a lot of room for growth.”[10] (see diagram below)

Contrary to the industry’s claims, Virginia does NOT need more pipelines. As mentioned previously, much of this gas will simply be passing through. Additionally, existing pipelines can be used for any gas transportation needs. We can build a new Virginia economy by investing in solar and wind power, creating more permanent jobs, clean energy for Virginia, and a more stable climate without jeopardizing our homes, health and heritage.

For the over $5 billion that Dominion is proposing to spend on the Atlantic Coast Pipeline, a Chesapeake Climate Action Network Analysis found that we could:

Installing and maintaining this solar industry would create 2,500 temporary construction jobs and support 216 permanent jobs annually, plus additional jobs due to lower energy prices over time, and improved health outcomes of workers across the state. By comparison, the Dominion commissioned Chmura analytical economy report predicted that the Atlantic Coast Pipeline would support 1462 short term jobs and 118 jobs annually.[11]

According to a survey in September 2016, only 28% of Virginians support this effort to push through the pipelines.[12] It is clear that these projects are almost as unwanted as they are unnecessary. It is also clear that more and more Virginia residents are becoming familiar with the risks of fracked gas and such pipelines, as well as the benefits of alternative means of sustainable energy- ones that actually do provide jobs and benefits to the state and our communities instead of destroying us. I would hazard a guess that, were a survey conducted now that people are more familiar with the issue, that number may even be lower.

The only winning path forward on the part of the governor and the VA State Water Control Board is to reject these toxic proposals and lead the people of Virginia into a truly profitable, bright, and healthy future.

Thank you for your time and consideration.

As expected, it looks like Chad Dotson is winning the GOP nomination in SD38 handily... https://bluevirginia.us/2021/01/one-of-virginias-first-political-bloggers-appears-to-be-frontrunner-for-republican-nomination-in-sd38#comment-5237020150 cc: @AndrewWhitleyVA