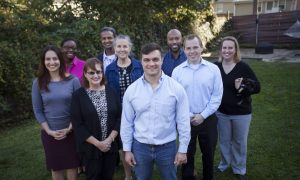 Today, an effective Democratic party is not just a “nice-to-have” – it’s essential for the continuation of American democracy. That makes it imperative to strengthen the party at every level.

So I was genuinely excited this past month to hear Dan Lagana, candidate for Fairfax County Democratic Committee (FCDC) Chair – election open to party members January 9th – and the team he has assembled to run for the open positions on the Steering Committee, Stronger Tomorrow, present on their vision and plans. The group exudes polish and professionalism in a way that I’m not used to seeing among Dems.

The Stronger Tomorrow promise to strengthen and improve FCDC has three key elements:

I was intrigued enough by all of this to schedule an interview with Dan Lagana to learn more. Dan is a lifelong Fairfax County resident who, thanks to two parents in the Foreign Service, was born in El Salvador and has lived in Ecuador and Italy. He attended West Potomac High School, served six years in the U.S. Army, including two deployments to Iraq, and attended Columbia University on the GI Bill.

In his political career, he managed Kathy Smith’s successful race for Sully District Supervisor, helping flip that seat to the Democrats. He is currently FCDC Vice Chair South.

Following are some key excerpts from my discussion with him.

(BTW, in the interest of Democratic camaraderie, let me note that the other candidate for FCDC Chair, Paul Jameson, has much to offer as well, and his supporters are free to post in support of him here at BV.)

What makes you a Democrat?

[Dan related the following story:] I was bussing tables and cleaning bathrooms at a restaurant in Alexandria. I was 22-23 at the time, having just returned from my first deployment to Iraq. I come in to work one day and my boss tells me he’s firing me. I’ve worked there for 5-6 months, and was really surprised, because I came early to every shift and had gotten good reviews.

I later found out that this guy fired me because he wanted to hire a cute female. I thought it must matter that I was a veteran, but it didn’t.

I’ve always leaned toward the Democratic party. But my political consciousness got awakened after this. No representation – there was no union out there for me. In Virginia, you can just get fired for whatever reason they want.

I thought to myself, this is not the way to run a country or state. How many people deal with that every day? You work at Subway, you’ve got two kids, you’re struggling to pay rent, and you’re 10 minutes late because you had to change your child’s diaper. The boss says: You’re fired. People have it a lot worse that Dan Lagana does. So that little piece informed my view.

What did you learn from the Army?

When you go on deployment, you have to deal with everybody, and you have to get along, and work together…You’ve got to get along to execute a mission and accomplish a task, and you’re not going to do that by making enemies of the people you have to work with.

There are very few institutions in the United States left that have such a broad cross-section of American life coming together. You get people from all walks of life. I mean, universities used to be that way. It’s one of the few institutions in the United States, perhaps the only, where you get all social classes, all races, all backgrounds coming together. Being a kid who grew up in a Foreign Service family, we fancied ourselves more elite, but the best education you could possibly get is having to sit and work with people from every corner of the United States and the globe, from every type of background.

Why did you put the Stronger Tomorrow team together and how does it work?

You can’t just run as a Chair, and say “I have all these ideas, vote for me” if you don’t have a plan. And in order to have that plan executed, you need to have people in place who are bought into your plan. Getting the right people to do it is the skill, knowing you can’t do it yourself.

But we run on our own merits, so this is really about a message, and that’s where “Stronger Tomorrow” came from. It’s about governing, not winning for the sake of winning. I thought that was key, especially given how important 2018 and 2019 are going to be.

Something I recognized [at FCDC Steering Committee meetings] was that there was going to be a lot of turnover this year. So in my view, I said not only do I need to find people, but it was an opportunity to bring a lot of new people who’ve gotten involved with the grassroots groups, and put them in positions of leadership.

This is an opportunity that we have as a party, to show that we’re serious about growth, about taking a wider view of what it means to be a Democrat, making sure that we embrace everyone with open arms, that we fight the inclinations that all big institutions have against change.

What’s your plan for those districts in the exurbs where Democrats still have work to do?

I’m going to go back to this word “opportunity”. We’ve talked about talking to independents and no-data voters, but it’s nerve-wracking to actually do it. If people don’t see the SD [strong Democrat] or LD [lean Democrat] on their sheet, they start getting wobbly. But now you’ve got a group of people who not only want to do it, they’re hungry to do it. So we need to take advantage of that. You have to expand your universe in this area, and it’s an offensive measure as much as defensive.

What it does require is groundwork and elbow grease in the local elections – there’s no way around it, you’ve got to work hard. And you know, this playbook has worked. In ’15, we did something like it with Kathy Smith.

This is a great way to direct energy. Right now, we’ve got a lot of nervous energy in the party. People who just came off the big victory, they’re anxious to get to work, they don’t want to take anything for granted. Democrats are not complacent, and that’s exactly how we should be feeling.

So how do you see the party working with the pop-up groups – Indivisible, Sister District, etc.?

They view themselves as part of the broader progressive Democratic whole, and we should probably stop thinking about that whole as just the Democratic party. It’s this constellation of groups – that is what we are.

You’ve got to work with them, you’ve got to learn from them. They want to be more involved. Some of them have ideas and they think the party could be doing some things better. But they really appreciate the work the party’s been doing, and they sort of feel like “I need to step up now.”

That’s what heartens me – that they view themselves as part of the broader progressive Democratic whole, and we should probably stop thinking about that whole as just the Democratic party. It’s this constellation of groups – that is what we are.

Some of these groups just up and decide that a candidate needs extra money for mailers at the end of the campaign, an email goes out and they raise $40,000. You know what that tells me? That they’re committed and well-organized.

If we’re going to grow and position ourselves for victory in the future – certainly 2020, though my focus is on 2019 and 2018 – these groups are key to our success. These groups are the awakening that we’ve always talked about. So this is good, this is a net positive. We’re complementary, we’re here to support them. We need to democratize this stuff.

What are your plans for reviving some of FCDC’s not very active committees?

I have to set expectations. I need to say, I expect you to meet four times a year, and I want you to come up with a work plan, and I want every group, every six months to have at least one event or significant act.

Accountability is going to be a thing – if you say you’re going to do something, I expect you to at least try to do it. I mean, this is the bare minimum. We’re all elected. So you decide to offer your free time to us, I can only tell you to do so much. You’ve got to take the initiative. And if you’re committed to advancing progressive ideals and principles, I’d hope that you would.

So we want to hold a retreat in February. It’ll be open to anyone who wants to come, though designed for the leadership of the Steering Committee. Everyone’s going to talk, and we’re going to get on the same sheet of music. If people feel like there’s a lot going on, they’ll think, well, I don’t want to let the others down, because we’ve all got a sense of ownership. That’s going to motivate people – feeling invested personally.

What do you see as the balance between the party supporting incumbents vs. encouraging challengers?

My view is the party doesn’t get involved in nomination contests, but we do everything we can to ensure they’re fair, open and transparent, and people have the resources and tools to run good campaigns. Candidates need to submit themselves to the voters of their district, and they need to demonstrate that they can raise the money, that they can do the hard part – and it’s not the party’s job to interfere in that. We shouldn’t be picking favorites. If the voters don’t think that so-and-so should be in their position, then that’s the voters’ decision to make.

How do you get more of Fairfax County’s many educated professionals involved with the party?

I think we’re very lucky in Fairfax County, in that we’ve got this very strong, deep reservoir of talented citizens that want to run and do things. You’ve got to show that you’re open to them. One of the things we do want to do is a skills survey. Are you a lawyer, an ESL teacher, an engineer? We want to know, tell us. We’ve got this deep bench of people – why aren’t we using them?

[For example, on improving FCDC cybersecurity]: There need to be basic steps taken on our Committee to protect us ahead of 2020. We’ve got members with skills in this area. Why aren’t they part of this? This is why having a closed, institutionalist mentality hurts you. You’ve got assets there.

One of the things we want to do, as part of our campaign platform, is getting as many members of FCDC as possible to apply to County board appointments as possible. Look, personnel is policy, and you’re there, making decisions. And they need you to be there. It gives you a better perspective on local governing, which is hard and unforgiving. I think this is a great way to connect values and politics with action. 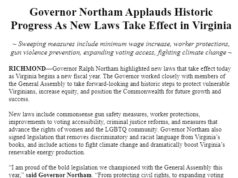 And just like that, when real $$$ is at stake - not just people telling Dan Snyder that his team's name is offensive, racist, etc. - there's finally movement. https://bluevirginia.us/2020/07/dan-snyder-could-have-gotten-ahead-of-this-but-of-course-he-didnt-because-hes-dan-snyder#comment-4978203898