I like all of these bills (see below), introduced today by Delegates Sam Rasoul and Marcus Simon — to allow for some form of public financing of campaigns in Virginia and to expand voting eligibility to 16 year olds. On the voting age, I recommend The case for allowing 16-year-olds to vote, which argues that 16 year olds are perfectly capable of making informed/rational decision (I’d argue MUCH more capable than some 40, 50, 60, 70, or 80-year-old Trump voter!) and that, perhaps more importantly, “Entrenched both in familial and institutional support groups, 16-year-olds are in a better place to form long-lasting voting habits than 18-year-olds — but only if the right to vote is accompanied by a robust civics education.” As for public financing of campaigns, if you want to reduce the influence of corporate and super-wealthy people’s money in politics, then this is one way to do so. Of course, all of these measures will likely be opposed by Republicans, because that’s how they roll, but still, thanks to Delegates Rasoul and Simon for trying! 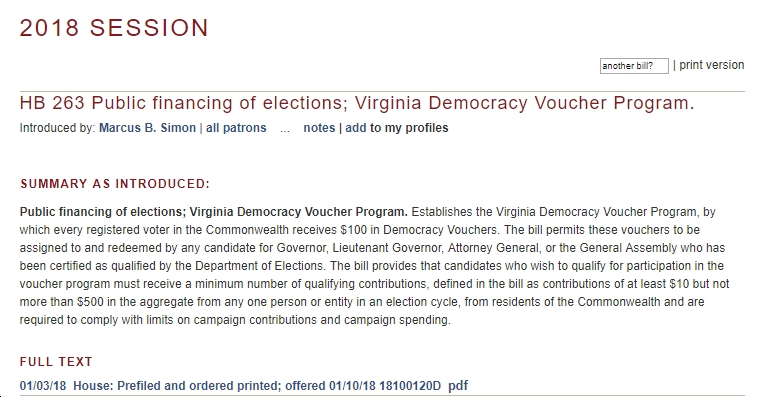 RASOUL INTRODUCES FOUR BILLS
FOCUSING ON ELECTION REFORM IN VIRGINIA
ROANOKE, VA – Del. Sam Rasoul (D-Roanoke City) introduces four new bills on election reform in Virginia. His bills include voluntary public financing of campaigns, redistricting reform, and two constitutional amendments that would allow 16 year olds to vote in local elections, and a change the Initiatives and Referendums process.
“Over the past two election cycles, I think it is clear that our election process needs to be reformed.” said Delegate Rasoul. “As a Delegate, I represent the people who put me in office. I feel it is my duty to ensure there is fairness in the election process and that we keep the power in the hands of the people.”
Public Financing of Campaigns (HB 275): Establishes a voluntary program for administering public funds to qualified candidates for the purposes of campaigning for office.
Ending Gerrymandering (HB 276): Establishes a Virginia Interim Redistricting Commission (the Commission) when any congressional or state legislative district drawn is declared unlawful or unconstitutional by order of any state or federal court. The Commission will be tasked with determining a redistricting plan remedying such unlawful or unconstitutional district.
Direct Democracy (HJ 34): Allows the people the power to propose and enact laws and constitutional amendments by initiative, to reject legislative acts by referendum, and to remove certain elected officials by recall.
Lowering Voting Age (HJ 33):  Allows any person who is sixteen years of age or older to be permitted to register to vote and to vote in local elections.
HB 275, HB 276, HJ 34, and HJ 33 will be heard when the General Assembly convenes in January 2018.
There's no paywall on Blue Virginia, and we definitely want to keep it that way! If you want to help support our work, you can donate here - thanks! Also, you can sign up for our weekly email list here.