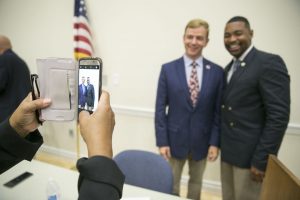 Last night, I attended the scheduled hearing which is part of the Lecky vs Virginia State Board of Elections lawsuit. This suit is part of an ongoing fight by voters in House District 28 (which encompasses parts of Stafford County and the City of Fredericksburg) who were disenfranchised by a series of voting irregularities.

As a point of review, the margin of victory in this race came down to 73 votes after a recount, with a full 147 (or more) voters being given the wrong ballots on election day. (For a full recap of those irregularities, you can see my comments here)

Combine all of the above with a candidate of unique background – a young black pastor with refreshingly progressive views – and you have someone that was made to defy electoral expectations. Especially with the nature of last year’s electorate.

As for the case itself. Judge Ellis unfortunately did not rule in favor of the voters. Without going too far into the legalese, he didn’t feel that those representing the voters came up with enough evidence to show that the problems were severe or wide-spread enough to warrant federal interference in the matter. The crux of the argument made by the other side (including the lawyers representing Republican Bob Thomas, who “defeated” Democrat Joshua Cole on election day) is that the irregularities are of a “garden variety.” Basically, the problems were small and arose from human and system error, not on a large scale or with the intent to disenfranchise.

He left the door open for additional legal arguments, but at the moment said that he didn’t think the voters had enough evidence to prevail in federal court.

Let’s take this last moment to reflect on that last part. Taking out the legal perspective of the argument (which I will agree the judge did a good job of explaining,) the Republicans here essentially argued that there was no reason to stop Bob Thomas from being seated because there wasn’t ENOUGH disenfranchisement; that there weren’t ENOUGH voters they were wronged to warrant action taken by the judge.

This comes literally a day after a drawing was done to determine the winner of another district because these same folks argued that an overvote needed to be counted because each vote is sacred.

Let that sink in.

When you’re done, take a look at Washington Post‘s coverage, and join me in looking at some of the great bills Virginia House Democrats have filed to try and restore some sense of Electoral Justice to our commonwealth.

So, is slimy/dishonest Glenn Youngkin still more "concerned" (in air quotes, because obviously it's faux "concern") about the LEAK of the Supreme Court's extremist Roe decision than about the substance of the actual decision?