I’d call this a dog of a bill, but this is my dog, and she’s pretty darned cute.

We have seen the future, and it looks suspiciously like the past.

I’m referring, of course, to the much-anticipated legislation Dominion Energy Virginia’s friends are peddling in the Virginia legislature to replace the infamous rate rip-off of 2015 with a brand new way for utilities to skip regulatory oversight and avoid giving refunds.

Personally, I have to hand it to Dominion on this one. Its lobbyists spent the fall trying to convince legislators not to reverse the brilliantly—though falsely—named “rate freeze.” Dominion hoped legislators would ignore estimates that the utility would keep northwards of a billion dollars in unearned profit from it, not to mention the barrage of newspaper articles connecting Dominion’s campaign contributions to the votes of legislators in support of the law. Apparently, a lot of legislators made it clear they were done being snookered, because by December, Dominion had publicly announced that it, too, believed it was time to change the law.

So Dominion had a PR disaster on its hands, and what did it do? Offer massive refunds and a return to regulatory oversight? Heck, no. The new bill allows Dominion to avoid regulatory oversight pretty much forever, while rebating just a fraction of the loot. Awesome head fake, guys!

Mind you, there are a lot of great buzzwords in the bill. If you didn’t know any better—if you happen to be one of this year’s snookerees, as the rank-and-file legislators are meant to be—you might think this bill is intended to transform the grid and add massive amounts of solar energy and energy efficiency. It could have been written to do that, but it wasn’t.

For a fuller explanation of this legislation and how it fits into the long pattern of Virginia legislators giving away the store to Dominion, see this terrific analysis from Dan Casey of the Roanoke Times. As he demonstrates, this is not legislation aimed at transforming the business of energy in Virginia. It’s aimed at ensuring Dominion gains unfettered control.

If legislative leaders are serious about transforming our energy economy, they could amend the bill now to give the State Corporation Commission back its role in protecting consumers from unwise spending and by ordering refunds and rate reductions when utilities collect more than permitted by law. The current draft of the bill throws a small fraction of past overearnings back to customers, ignores 2017 overearnings altogether, and allows utilities to game the system so rates can only go up hereafter.

Grid transformation is indeed important—so important that it shouldn’t be left to profit-seeking utilities to decide what grid investments are in the public interest. This issue needs an independent study with in-depth analysis and extensive public input– the sensible approach that has been taken by numerous states across the country. Letting Dominion decide what investments to make guarantees we’ll see only the ones that allow Dominion to tighten its control over Virginia’s power supply.

The bill also tries to buy off environmentalists with a promise of up to 4,000 MW of solar by 2028, a figure that was already in play (and appears in other bills this year) as a result of negotiations between utilities and the solar industry. To put that in context, recall that The Solar Foundation analysis showed Virginia needs 15,000 MW of solar to equal just 10% of our electricity supply. Do the math: 4,000 MW is well under 5% under the best of circumstances. When a bunch of other states are getting 20% of their electricity from wind and solar resources today, the promise of less than 5% over ten years is not only grossly inadequate, it’s insulting. Perhaps we environmentalists can be bought, but not that cheaply.

But will legislators wise up in time? Senate Minority Leader Dick Saslaw’s version of the legislation (there are several), SB 967, runs for 22 pages of mind-numbing detail that can’t be fully understood by anyone but a lawyer specializing in electric utility regulation. I’m not one, and I’m grateful for the help of people who are. Saslaw’s bill was introduced Friday—the last possible day to file legislation—and did not appear online until Tuesday. The Senate legislation may come before the Commerce and Labor committee as soon as Monday, and House versions may be in subcommittee on Tuesday.

Not everyone is being snookered, to be sure. Senator Chap Petersen has renewed his earlier effort for a more straightforward repeal of the “rate freeze,” and a bipartisan group of 11 senators have fired off a letter to the SCC asking for a report on what effect the various bills will have “on refunds owed to rate payers for past payments” and “the effects on future rates.” Six House members have done the same.

Finally, Thursday afternoon Governor Northam weighed in, saying he had “significant concerns about the bill that is on the table.” An email from the Governor’s office laid out goals that echo what critics have been saying. First, more money should be refunded to ratepayers. Grid modernization should be defined, the focus on clean energy increased, and the SCC should be involved to make sure Virginians “are getting the best bang for the buck.” And perhaps most critically, the legislation should “restore the SCC’s authority to ensure that Virginia families and businesses do not pay more for power than they should under state law.”

Perhaps having the Governor weigh in will put a stop to the plan to turn electric utility regulation over to the monopolies themselves. Associated Press reporter Alan Suderman quotes Dominion spokesman David Botkins as saying by way of response that the legislation is a “work in progress.”

But why is this up for negotiation? Legislators should insist on a return to regular order, put an independent agency in charge of grid transformation, and set mandatory targets for decarbonizing our electricity supply. It’s time for the snookering to stop. 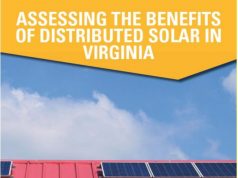