The Washington Post this morning piggybacks off a FOIA investigation by the AP (nice job!) about why “getting into prestigious Thomas Jefferson High School for Science and Technology, a magnet school that routinely sends graduates to the most competitive colleges,” can be extremely difficult, unless of course you can afford to file appeals, “armed with private exams costing more than $500, to persuade bureaucrats their child is deserving” of admission to the top regional school nicknamed “TJ.” The problem? (bolding added by me for emphasis)

…This system exacerbates a problem plaguing gifted-and-talented programs across the nation: Black and Hispanic students almost never file the appeals that can secure their admission.

Using the Virginia Freedom of Information Act to obtain 10 years of county records, The Associated Press found that fewer than 50 black and Hispanic second-graders have filed successful appeals. That’s less than 3 percent of the 1,737 second-graders admitted through the appeals process, further skewing a program already heavily weighted toward whites and Asians.

Fairfax County has the nation’s 10th largest public school system, with more than 188,000 students. Of those, 25 percent are Hispanic and 10 percent are African-American. But over the last 10 years, blacks and Hispanics have constituted only 12 percent of the students deemed eligible for Level IV, the most advanced academic program.

There are just a few dozen black students at Thomas Jefferson, where sophomore Alina Ampeh is surrounded by whites and Asians — a situation she’s lived with since elementary school. She’s grateful that all those years of advanced classes prepared her for TJ’s rigorous academics, but says that doesn’t necessarily make her special: She thinks many of her classmates simply have parents who worked the system.

So yeah, this situation is unacceptable and in dire need of immediate correction. But not according to commenters on the Washington Post article, who respond with a torrent of racist idiocy that, among other things, clearly violates the Post’s own “standards” for commenting. 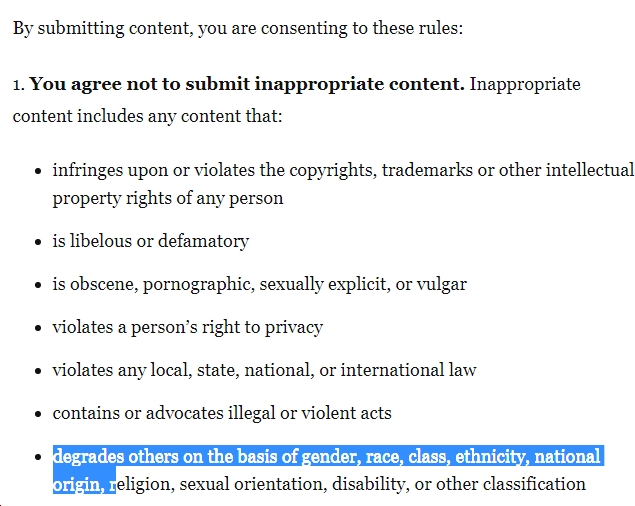 For instance, check out the top-rated (!) comments like the following, all of which are racist and/or ignorant and/or just plain nasty.

It goes on and on like this, with no sign of a (Com)Post moderator in sight to enforce the “standards” of Jeff Bezos’ fine newspaper. Just for comparison purposes, racist comments would be immediately deleted here at Blue Virginia and the commenters banned. Of course, then again, we also follow other principles of journalistic ethics – like linking to original sources, giving credit/attribution, etc. – that the corporate media rarely seems to care about in its race for eyeballs/clicks/etc.

By the way, Sen. Scott Surovell (D-Fairfax/Prince William County) has been a leader on this issue (thank you!), for instance with his SB787 that would have required – if it hadn’t been defeated in committee – Thomas Jefferson H.S. “to accept for enrollment (i) a sufficient number of students eligible to receive free or reduced price meals such that the total of such students is at least 50 percent of the weighted average of the participating divisions’ percentage of such students in the previous school year and (ii) at least five students but no more than 15 students from each middle school in each school division eligible to matriculate students to such Governor’s school who have completed at least two full years at such middle school.” Here’s what Sen. Surovell had to say about the WaPo article on “TJ” this morning.

Last week, 5 letters to the editor attacking my TJ admissions bill arguing that TJ is all about “merit” and that we just need to do a better job educating Black and Latino kids: Most of the time Merit = Wealth and having the time and ability to work your child to the right spot in the system – e.g. parents working the “gifted and talented” appeal process for their second graders as the AP just confirmed. Why can’t more leaders be honest about the shortfalls in our system?

Great question; any answers? More to the point, what is Fairfax County – or the Virginia General Assembly – planning to do about this situation?