For those of you not familiar with him, Del. Tim Hugo (R-Fairfax/PW County) is a particularly slimy/odious (see Special Interests Dominate Delegate Hugo’s Finance Report, New Story by Michael Pope Highlights How Predatory Lenders “Capture” Virginia GOP Delegates Like Tim Hugo, The NRA’s Favorite Virginia General Assembly Republicans, etc.) Virginia House Republican. This past November, Hugo came super close to losing his seat (to Democrat Donte Tanner), leaving him as one of the most vulnerable Northern Virginia Republicans left standing after the 2017 blue tidal wave here in Virginia.

Given all that, you’d think that Hugo might spend his remaining time in office focused on things that help his own district, not on getting revenge against other places he’s mad at. For instance, there’s Arlington County, which Hugo wants to screw over in at least two big ways: 1) by turning I-66 into a toll road in BOTH directions, which of course would hit “reverse commuters” coming from DC, Arlington, etc.; and 2) by taking away local control even MORE from localities, in this case by forcing Arlington to lower its assessed value country clubs/golf courses for mostly VERY rich people (members pay around $70,000! per year to belong; who the heck can afford THAT other than the super-rich???). Brilliant, eh? Typical, though, for a slimy “swamp creature” like Hugo.

On the latter idiocy – truly one of the worst bills this session, by the way – what Hugo wants to do is to force Arlington to change the way it assesses the value of these golf courses’ land, in a way that will save the golf courses an estimated $1.5 million per year – and for absolutely NO GOOD REASON (and a bunch of bad ones). See Arlington County Board member Christian Dorsey talking about the potential negative impacts on Arlington’s schools and other important services of Hugo’s bill at 5:49:15 of this video (from the 2/24/18 Arlington County Board meeting). And why does Hugo want to hurt Arlington schools and other important services? Answer: to save VERY wealthy golf club owners and VERY wealthy members (again, who pay around $70,000! per year to belong) a bunch of money so they can get even wealthier? Brilliant move by the “swamp creature!”

The “arguments” (such as they are) for this godawful legislation, which believe it or not has actually passed both the House of Delegates (65-33) and State Senate (Thursday, by a 27-13 vote) – with Democrats mostly (why not ALL?!? hello???) opposed and party-of-the-wealthy Republicans UNANIMOUSLY voting “aye” – are really, really dumb, by the way. According to the bill’s proponents, Arlington County should be forced to change the way it’s been assessing the value of these golf course for decades, because supposedly the way Arlington does this is not consistent with other jurisdictions in Virginia (you ask: who cares? and why is that relevant in any way?). Of course, the fact is that Arlington County is a dense, urban(ish) county — the smallest self-governing county in the United States, actually. It’s also a county that’s right next door to the nation’s capital, with multiple Metro stops, a superb school system and other public amenities, and tons of people clamoring to live there.

Now, if you’ve taken any economics in your life, and if you didn’t sleep through it or flunk out of it, you know that with the supply of land largely fixed and the demand curve for that land constantly shifting outwards, the value of said land will continue to increase. Which is, of course, exactly what’s happened in Arlington County. In addition, if you have any understanding of economics whatsoever, you understand that the more desirable something is, the more expensive – all else being equal – it is. And again, people really want to live in Arlington, so it shouldn’t be surprising that it’s expensive to live in the “people’s republic” (and getting more expensive).

Which brings us back to the two Arlington County golf courses — Army Navy Country Club and Washington Golf & Country Club — in line here for a nice corporate welfare gift check from Tim Hugo and his merry band of plutocratic Republicans. We’ll leave aside for now the question of whether using precious, super-high-value land in a densely populated/urban(ish) county like Arlington for a golf course is a good idea (hint: that’s highly debatable, especially given the fact that the Washington Golf & Country Club has a horrible history when it comes to the environment). But given that these two golf courses/country clubs already exist in Arlington, how should they be assessed?

Option 1: assess the properties (as has been done or many, many years) based, at least in part, on what that land COULD be used for, such as possibly single-family homes going for $2 million a pop or whatever. Option 2: assess the properties (as Del. Hugo wants to do) based on the “actual physical use of the property” and don’t consider what the land would be worth if it were used in another fashion (e.g., for single-family homes). Note that Option 1 results in assessed values, and therefore taxes to Arlington County, that are a LOT higher than Option 2 (see here; apparently Hugo’s bill cuts the assessed value rate from $12 per square foot – still FAR lower than the “$99.75 per square foot for residential parcels in the North Glebe Road neighborhood” –  to just 50 cents per square foot!). Which means, again, that switching from Option 1 (which it’s been for many, many years) to Option 2 would cost Arlington a shit-ton of $$$.

Why switch now? Has anything changed drastically in recent years? For instance, have these country clubs/golf courses been socked with exorbitant tax bills? Have their assessed values skyrocketed? Nope. Nope. And nope.

See below for some information on one of the properties — Washington Golf & Country Club, Inc. at 3017 N. Glebe Road in Arlington. Note first of all that the property is zoned R-10 (One-Family Dwelling). So, again, this land could be used to build very expensive, single-family detached homes on it – and assessed/taxed accordingly. But today it’s a golf course, built back in 1958 (when Arlington County was a sleepy bedroom community with no Metro, etc.). Check out Google Maps if you’re interested in seeing what’s near this golf course — Marymount University and a bunch of single-family, detached homes all around the golf course.  So why on earth wouldn’t that land be assessed closer to R-10 (One-Family Dwelling) rates? Got me, but Del. Hugo (R-Fairfax/PW County) for some reason wants to FORCE Arlington to change the way it’s handled this property for many years by slashing the assessed values of these properties by over 90%. For no good reason, either, other than to give a massive tax break to super-rich people.

Also see below for a history of the golf club’s assessed value and tax payments. Note that the assessed value today, at around $77 million, is almost exactly 10% higher than it was in 2008 ($70 million). So no big change there…pretty slow appreciation, actually, given how well Arlington real estate has been doing in recent years. As for the club’s tax payments, there appears to be a big bump between 2015 and 2016, but I’m told that in 2016, the club’s assessment climbed by $16 million over 2015 — likely as a result of the precipitously rising value of residential-zoned land in that part of the country during that time — but then the golf club appealed to the Board of Equalization, which adjusted their assessment down to just $1m over the previous year. Nice, huh? Seriously, though, this is actually a great illustration of the fact that there is a process available to the golf clubs (or any property owner that believes they are being unfairly assessed). The Board of Equalization already delivered them “relief” from a higher assessment. So it is totally disingenuous for any member of the General Assembly, such as the cynical, dishonest Tim Hugo, to imply that Arlington’s country clubs had “no other option” than to seek legislative action in Richmond. That’s simply, wildly false.

Also see below for a comparison of the Arlington golf courses’ assessed values and taxes paid to others in the region. Note that Arlington’s golf courses pay more in taxes, not surprisingly, because they are assessed higher than golf clubs in other jurisdictions. There’s NOTHING nefarious about that, but simply the fact that land is worth a LOT more in Arlington than it is in some of the other places, and because Arlington COULD use this land for single-family homes as an alternative to the country clubs.  And given those higher assessments – still well below what they WOULD be assessed at if they were single-family homes, by the way – they naturally pay more in taxes. And the problem here is????

Finally, see below for an action alert from the Virginia Municipal League, which urges OPPOSITION to this “unfunded state mandate,” warning that: a) this bill “trespasses on long-standing state policy recognizing that these local assessment decisions rest with localities”; b) “The state will not make up for lost tax dollars”; and c) “The state already has a process to appeal assessments. Taxpayers can appeal to the assessor or Commissioner of the Revenue, the locality’s Board of Equalization, and the relevant Circuit Court. And, this process should be followed first before legislative action.”

Last but certainly not least, the problem with this bill is that it sets a HORRIBLE precedent for the future. In short, if the Virginia General Assembly can heavy-handedly intervene with one Virginia locality to force it to change the way they make assessments for certain types of businesses, they can do the same to ANY locality for ANY type of business. What next, restaurants don’t like the way they’re assessed? shopping malls? jewelry stores? Is Del. Hugo going to rush to their rescue next? What’s to stop him if he can do it in this case? Got me, but the bottom line is that this is Dillon Rule run amok, and it should be completely unacceptable to anyone who values localities being able to maintain some decision making authority vs. the state.

Gov. Ralph Northam, the choice is clear: VETO THIS GODAWFUL BILL!  Thank you. 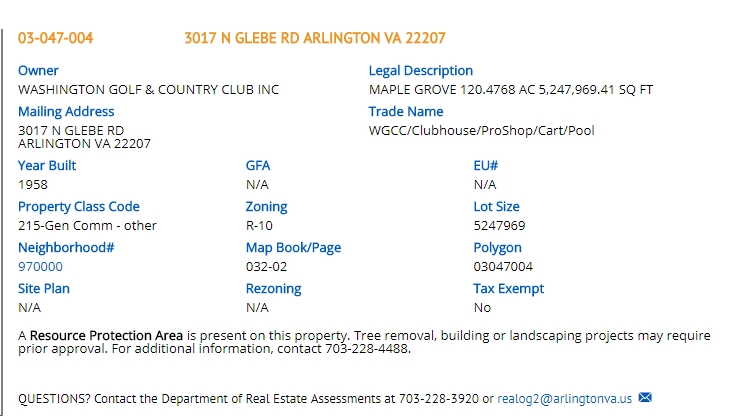 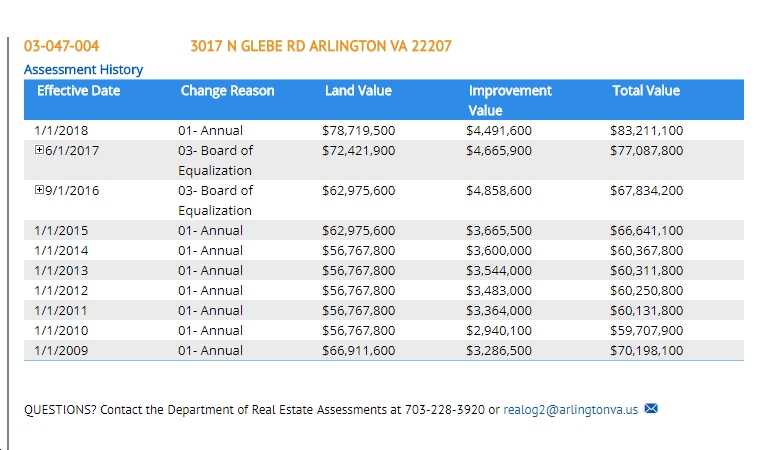 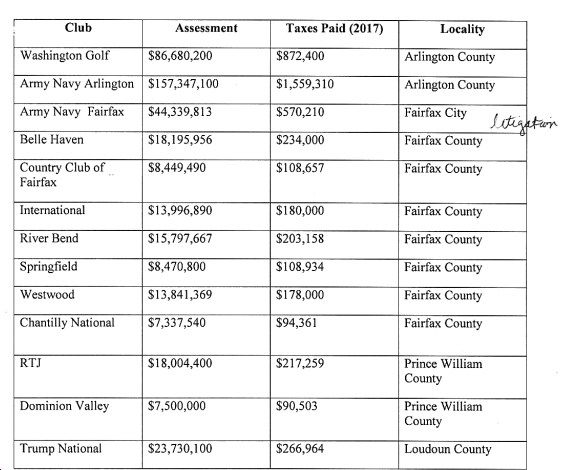 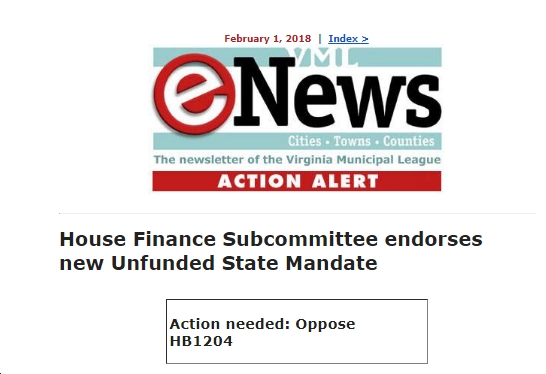 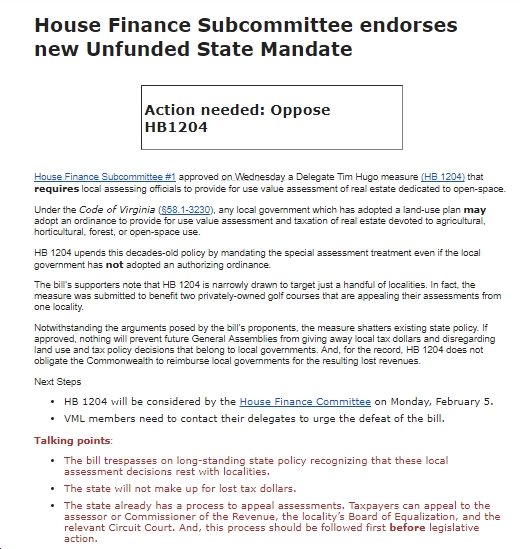