It seems like every day I find new and more aggravating reasons why we cannot rest here in Virginia until we take the majority in the General Assembly. Today, let me tell you how Delegate Tim Hugo (R-Fairfax County, Prince William County), the one who we should’ve been able to replace with Democrat Donte Tanner this past November, is trying to undermine a 35-year old bipartisan agreement in Fairfax County for making judicial appointments, to prevent Virginia from appointing its first female Asian-American judge.

First, let me (try to) explain how judicial appointments work in Virginia. When a vacancy occurs, it must be filled during the General Assembly session by a majority vote of the members of each house. Typically, the legislators representing the area where the vacancy lies (the “local delegation”) jointly decide on the nominees, and offer those names to the floor for a vote (following certification by the Courts of Justice Committees). In most areas of Virginia, this is a highly partisan process, whereby the majority-party members who are in the local delegation tell their Caucus who to vote for. This leads to more conservative judges being appointed when the General Assembly has a Republican majority.

In addition to the partisan nature of this process, the lack of oversight and nonpartisan vetting of judicial candidates has led to numerous cases where judicial appointments have smelled like nepotism and cronyism. For example, in 2008, the re-election of Judge John Farmer was suddenly blocked by Senator Phillip Puckett (D), whose daughter argued cases regularly before Judge Farmer. Puckett later resigned from his seat, replace by A. Benton Chafin, who was the principal for the law firm Puckett’s daughter worked at. And Puckett’s daughter was appointed to the judgeship. So, it looks a whole lot like Puckett traded his Senate seat to Chafin in exchange for a judgeship for his daughter. Oh, and by the way, the replacement of Puckett with Chafin flipped control of the State Senate, which was considering Medicaid expansion at the time, to Republicans. Gotta love the “Virginia Way!” 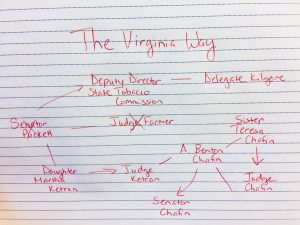 (Fun fact: Chafin’s sister, who was seated to the court before he took office, is up for re-confirmation in 2020.)

But the Fairfax delegation decided in the 1980s to develop a better process for nominating judges, more transparent, more bipartisan, and less subject to this kind of cronyism. And for 35 or so years, it’s been a model for other localities to follow. In Fairfax, the local Bar Associations’ Judicial Screening Panel interviews and thoroughly vets all those who apply for the vacant judgeship. Each one is ranked as highly recommended, recommended, qualified, or not qualified. Following this, their entire membership votes on the candidates, ultimately forwarding a list of endorsed names to the Fairfax delegation (consisting of 25 legislators). The Fairfax delegation then conducts their own interviews of the candidates, in a hearing that is open to the public. Following the interviews, they vote by secret ballot on which name to offer to the floor for a vote, with each legislator having one vote, regardless of how much of his/her district is within Fairfax.

For all 35 years they’ve been following this nonpartisan two-step process, regardless of which party holds a majority in the General Assembly; and typically the General Assembly accepts the recommendation of the Fairfax delegation. When retired Delegate Dave Albo (R) was part of the delegation, he had a vote and thought the process worked well. But suddenly now, Hugo, who barely won re-election this past November, claims to be dissatisfied with the process. And although he didn’t even attend the interview session this year, claiming a schedule conflict, one of his complaints about the process is that the legislators aren’t given enough time to review the candidates beforehand–which isn’t really true, as the only information that they don’t have access to until they enter the hearing is a candidate application form that contains confidential personal details about the candidates.

Hugo has essentially blocked the election of at least one (possibly two, depending on budget) judge for Fairfax county. Despite being one Republican out of a delegation of 25 legislators. Despite having only about 2% of the Fairfax population within his district. I have to wonder why? Would Hugo prefer Fairfax follow other regions of Virginia and allow crony appointments? Would he like to just pick the judge himself, perhaps he has a friend or business partner or family member he’d like to appoint?

There are real consequences to this. Not just for Maha-Rebekah Abejuela and Jonathan Frieden, who were recommended by the Fairfax Bar Association Judicial Screening Panel, but for the hundreds of children and low-income families whose cases would come before these judges. Thanks to Tim Hugo, those children and low-income families will now have to wait much longer for decisions about their lives to be made, because prolonged judicial vacancies mean high caseloads and longer delays. In sum, Hugo is diminishing the quality of justice in Fairfax County – for what reasons, only Hugo knows.