In the race for the hearts and minds of the hard-right, 2018 Virginia GOP U.S. Senate primary electorate, it’s basically impossible to be too extreme, too demagogic, too xenophobic, etc. The latest example? Check out Del. Nick Freitas doing his best imitation of neo-Confederate Corey Stewart’s immigrant-bashing routine. According to Freitas, Gov. Ralph Northam’s veto yesterday of Del. Ben Cline’s wacky legislation banning so-called “sanctuary cities” supposedly means that “When a non-citizen breaks the law, Northam provides them a sanctuary and calls it compassion.”

Of course, this is utter nonsense (just like almost every word out of Freitas’ mouth), as: a) Virginia doesn’t HAVE any “sanctuary cities”; b) even if Virginia DID have “sanctuary cities,” which it doesn’t, the fact is that “Sanctuary Cities have seen a reduction in crime and an increase in reporting of crimes; and c) “Sanctuary Cities do not shield people committing crimes. People who commit crimes still face the same charges, same sentences and punishments. In fact, crimes are more likely to be reported and witnesses are more likely to cooperate with law enforcement in Sanctuary localities.”

So why is Freitas putting out blatant falsehoods and immigrant-bashing nastiness? Simple: because Freitas saw that that type of nastiness came very close to winning Stewart the 2017 VA GOP gubernatorial nomination, and he doesn’t want to be left behind in 2018. Unfortunately for Freitas, it’s hard to imagine how he’s going to be able to out-xenophobe or out-demagogue Corey Stewart, who just yesterday called for the arrest of Fairfax County’s Sheriff (!) for supposedly not cooperating sufficiently with ICE. But hey, when you have no ideas other than robotically repeating the word “liberty” as many times as possible, and when your biggest claim to fame is an unhinged, fact-free speech he gave last month — claiming bizarrely that the problem with gun violence in this country stems from (pick one or more):  “gun-free zones,” “broken homes” and the government policies that supposedly contribute to “broken homes,” “various cultural changes that happened in the 60s [including] the abortion industry,” “the welfare state,” “dismantling families as [they] became more and more dependent on the government,” etc. — I guess it’s not surprising that you’d opt to focus on out-Coreying Corey Stewart. Good luck with that strategy! LOL 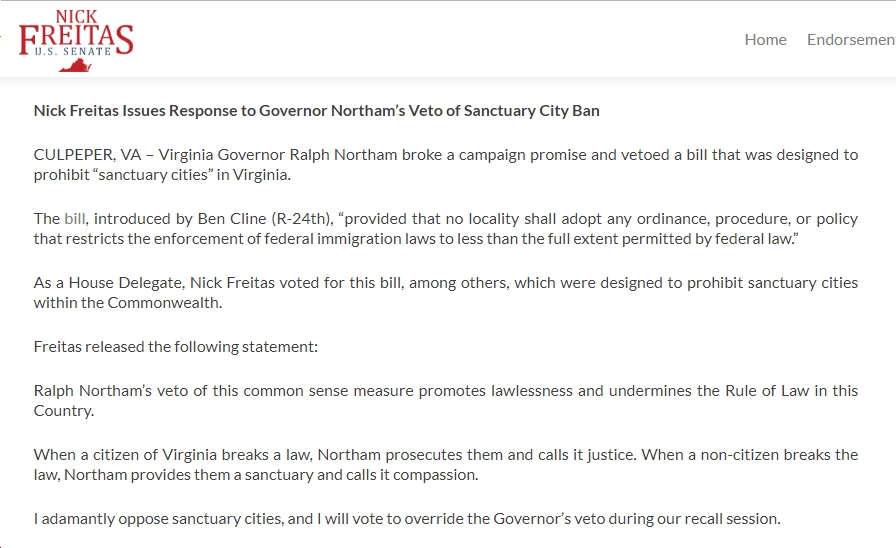 Wednesday News: “Russia’s abductions of Ukrainian children are a genocidal crime”; “Joe Biden Is Quietly Rolling Into 2024”; “George Santos is the Republican Party’s...