The Washington (Com)Post remains massively confused about truth, falsehood, and the word “misleading” First they post a headline that “Trump is blaming Democrats” without saying “FALSELY.” After getting reamed out by commenters to the article, the (Com)Post adds the word “falsely.” But the article is STILL highly flawed by its use of its phrase “misleading tweets,” when again, they weren’t “misleading,” they were FALSE, most likely INTENTIONALLY FALSE (aka, “lies”). Why is this SO f’ing hard for the corporate media to get right??? 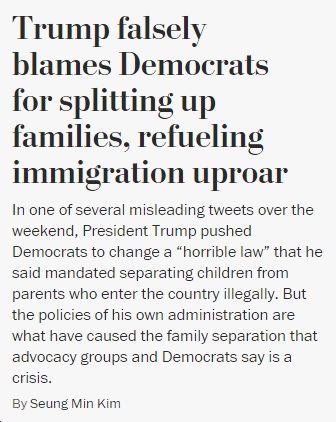 P.S. The top-rated comment (314 “likes”) starts, “They weren’t ‘misleading tweets,’ they were outright falsehoods, AKA lies.” The second-top-rated comment (234 “likes”) says: “Trump lies. Every day. Multiple times, significantly. These cannot be treated as simply singular events. They are not singular events. Trump is lying with such frequency in an attempt to create an alternative reality, where truth has no meaning. Where he has control over what is regarded as true or not true. Where he controls reality. This is known as a dictatorship.” etc.