I’m not sure what to make of this poll, as I certainly don’t trust Corey Stewart, “Team Corey,” or anything to do with that neo-Confederate nut. Having said that, it certainly seems plausible to me that E.W. Jackson would be in last place, since he’s basically done nothing this campaign. As for Nick Freitas, the fundamental problem is that he started this primary with basically zero name ID, whereas Corey Stewart just ran against – and almost defeated – Ed Gillespie for Governor last year. Plus, Corey Stewart has been Prince William County Board Chair for years, while Freitas was first elected to the Virginia House of Delegates in 2015, having just moved to Virginia in 2010. The other issue is whether anyone can “out-Trump” Corey Stewart in a primary dominated by rabid Trump supporters. With that said, here are the results from Corey Stewart’s internal poll. Note that although Stewart leads by a big margin (32%-9% over Freitas, with Jackson at 5%), that leaves 54% undecided. We’ll see how those folks break over the next 20 days, but right now, assuming this poll is even close to being accurate, it sure looks like neo-Confederate Corey remains the favorite to run a “vicious,” “ruthless” campaign against Sen. Tim Kaine this summer/fall. Can’t wait, huh? LOL

P.S. For the full polling memo, click here. The conclusion: “Stewart holds a strong lead with three weeks to go and continues to build momentum as he heads towards the finish line. Freitas, on the other hand, doesn’t appear to be gaining any traction and Jackson is going in reverse. As of now, it would take a seismic shift in the campaign debate for anything to chance in the next three weeks.” 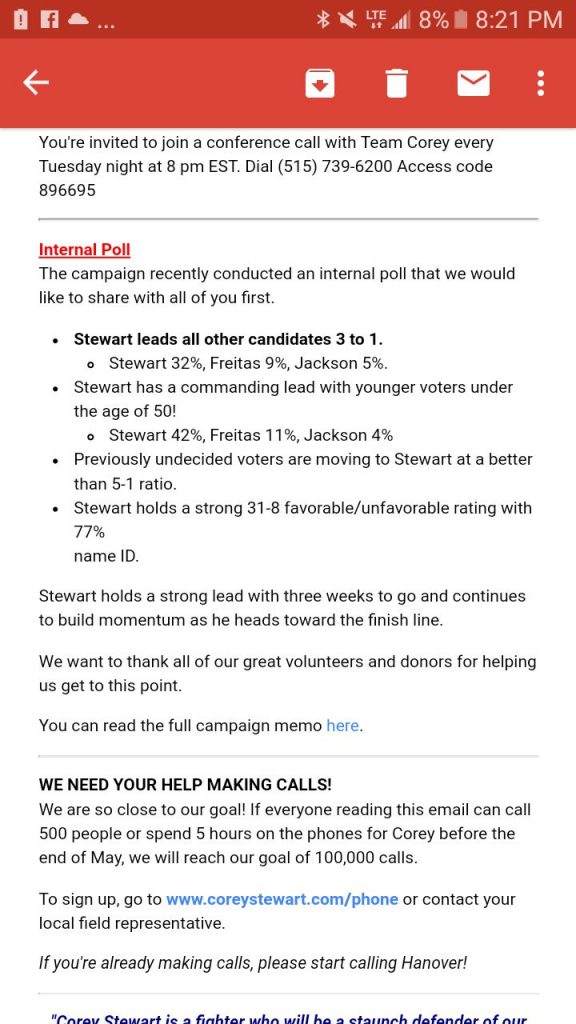