UPDATE 7:37 pm: See below for video of the last hour of today’s absurd State Senate session. First, Senate Majority Leader Tommy Norment (R) speaks about when the Senate will meet next (Tuesday, May 29 at 3 pm) and to claim that on Wednesday at 9 am “the budget issue will be addressed and resolved one way or the other.” Then, Sen. Emmett Hanger (R) says they’ve been hard at work on a budget “behind the scenes” and “are about there.” Hanger adds that there will be “definitive action” next Tuesday afternoon. Hanger said he expects to “conclude our business on Wednesday,” following a “complete airing and vetting of the budget as had been prepared by many hands.” More Hanger “We have a responsibility…we have probably pushed the time limit as far as we should…the governor is anxious…extremely anxious…[the House of Delegates] is not our enemy.” Sen. Dick Saslaw (D) says he “came here today” fully expecting to wrap things up this week, and that if the Senate doesn’t wrap things up by next week, “make no mistake about it, either I or Sen. Hanger will move to discharge the committee…health care is not a privilege, it’s a right…One way or the other, we’re going to get a bill to the governor…I would hope that you all who are opposed to this would examine your conscience.” Sen. Norment then comes back to spew out nonsense about Medicaid expansion, how the “financial consequences are going to be horrific,” how there are people who choose “not to help themselves,” how the rules of the Senate “were NOT going to be suspended,” how there’s no rush to do this (note that Virginia General Assembly Republicans have been blocking this for years now), how there’s “all kinds of rumor-mongering” and “fake news” out there (i.e., that Medicaid expansion negotiations were going on “at my behest” with a “wink and a nod,” that he’s planning to retire because “I’m so embarrassed at what has happened,” but that “I’m going to be here in 2019 and 2020 to kick your ass”). Norment then went on a mini-rant about “decorum” and about people who are “blinded in their approach.” Sen. Saslaw then asks when the majority leader “morphed into Donald Trump.” Sen. Mamie Locke (D) then talks about the adverse impact on localities of not having a budget and shares a letter from a mom, union member and psychiatric nurse from Loudoun County on the crucial importance of expanding Medicaid now. Sen. Mark Obenshain (R) then demonstrates why were all so fortunate that he lost to Mark Herring in 2013, because he (Obenshain) is a far-right nutjob (remember, this is the guy who wants to criminalize miscarriages). Obenshain basically spends several minutes spewing out complete nonsense, falsehoods and far-right talking points (mostly about how government is, supposedly, the root of all evils). For instance, Obenshain implies that health care is a problem invented by bureaucrats who just want to spend more money. Riiiiiiiiiiiiight. Oh, and how Medicaid “is hurting people.” I’m seriously not making this shit up – check out the video. Sen. Jeremy McPike (D) indignantly and angrily pushes back on Obenshain’s idiocy — “these are real people with real stories and real challenges; they didn’t ask for this, they didn’t sign up to become an amputee and then be described by some here as ‘a freeloaders'”). Sen. Siobhan Dunnavant (R) then claims that asking people to “examine their conscience” is somehow “disparaging.” Sen. Janet Howell (D) then kicks some serious butt: “I hope the press is watching and I hope the people of Virginia are watching, because we need to cast a bright spotlight on what’s happening here. We have a minority of the Senate of Virginia delaying and obstructing the will of the majority of the Senate…the majority of the House of Delegates…and most importantly, the overwhelming will of Virginians…Virginians overwhelmingly want Medicaid expansion…while we’re diddling and dawdling…people are suffering, some people are dying…get real here and do what we know has to be done and pass the budget and help Virginians.” Sen. Barbara Favola (D) notes that we have an obligation to stop wasting our tax dollars…we need to insure more people…It is really time to act, these facts have been out there…Why don’t we just take that next step?…I am not happy about this delay…We have to act next week.” Then the craziest speech of all, by Sen. Charles Carrico (R), ranting and raving about Planned Parenthood, “millions of babies dying every day” (what???), and “the agenda that you want” and having this “shoved down our throats” and…don’t even ask, just listen to this wacko if you can stand it. Sen. George Barker (D) correctly explains that government actually does things “extraordinarily well” in many ways, including on Medicaid, here in Virginia. Sen. Dick Saslaw asks why all the health wagons are in Southwest Virginia and not in Fairfax County. That sets Sen. Bill Stanley (R) off on an angry tirade about how “government dependency” has singlehandedly ruined southwestern Virginia and how HORRIBLE Medicaid is. Seriously. Again, you can’t make this shit up. Who votes for these people?!?

UPDATE 6:27 pm: I’ll post video in a little while of the last hour of angry/impassioned debate over Medicaid expansion, but for now, I’ll just give my awards for most unhinged, wrong-headed, angry speeches by Virginia Senate Republicans: 1) Sen. Carrico; 2) Sen. Obenshain; 3) Sen. Stanley. What’s really scary is that they seem to actually believe the far-right crap they spew out. Also that anyone ever votes for people like this. Amazing.

UPDATE 5:21 pm: In short, Republicans can’t govern and shouldn’t be in charge of anything Boot them all out of Congress in November 2019 and out of the the Virginia General Assembly in November 2019!

He also said that members of his caucus and Senate Finance need time to review the budget deal/amendments hashed out last night between Sen. Hanger and Del. Jones. When asked why the Senate even met today, he said “I don’t know.”

Senate Majority Leader Tommy Norment told a few of us that he thinks it’s “probable” that Medicaid expansion happens, he’s just not sure what form it will be in. We tried pressing him a few different ways but he declined to elaborate.

Sen. Richard Stuart voted against having Senate Finance convene next week because he feels it’s a signal that a few people are controlling the budget process. He thinks it should go into conference and be hashed out. “A lot of people that are not a part of this budget.”

OK, so here’s what just happened. Senate is taking a recess until 5 p.m. but the Rules Committee met briefly at a senator’s desk (I didn’t know they could do that). There they voted to convene Senate Finance next Tuesday at noon…So I imagine that this means there won’t be a vote on Medicaid today.

Word I’m hearing is NO Vote today. Senate will soon adjourn to reconvene next week. One week from today. #vagov

The Senate Rules Committee just voted for the Senate Finance Committee to convene on Tuesday May 29th at Noon. This likely means there is no Budget/Medicaid vote today but Senate Democrats are meeting now to discuss their options. #VAgov @wcve

UPDATE 4:33 pm: And with that, the Senate is now in recess until 5 pm as Republicans and Democrats huddle to discuss…strategery?

UPDATE 4:23 pm – Yes, they’re actually doing introductions of guests in the gallery…LOL That includes welcoming one group that deserves a great deal of praise – the “People’s Caravan for Medicaid Expansion.” Nice job by everyone involved in pushing for Medicaid expansion here in Virginia!

For years now, Virginia Republicans have ranted and raved about how HORRIBLE it would be expand health care coverage to hundreds of thousands of Virginians, to help rural hospitals, to bring back billions of dollars of our taxes, to help Virginia’s economy, etc, etc. Now, after picking up 15 seats in the Virginia House of Delegates, and after Congressional Republicans failed to kill “Obamacare,” Democrats – along with some House Republicans, at long last – are on the verge of (possibly, finally) expanding Medicaid in Virginia. Of course, Senate Republicans – including ones in districts won by Ralph Northam, like Glen Sturtevant, Siobhan Dunnavant, Frank Wagner and Dick Black – still seem hell bent on making it as difficult, onerous, punitive, etc. as possible. But hopefully we can overcome that. First, we have to get the legislation our of committee and onto the Senate floor, and overcome whatever procedural/other hurdles Majority Leader Norment and his caucus put up. So…we’ll see what happens; the debate should begin any minute now. Stay tuned…and watch it here.

P.S. According to the Richmond Times-Dispatch, the compromise reached between Senate Finance Co-Chairman Emmett Hanger and House Appropriations Chairman Chris Jones would “expand the state’s Medicaid program and pay for the state’s share through a new tax on hospital revenues that also would boost Medicaid payments for inpatient provider care.” It also would “bank an expected $500 million revenue windfall to boost Virginia’s reserve funds to almost $1 billion…provide for a 3 percent teacher pay raise and up to 4 percent (2 percent across the board and 2 percent merit pay) in salary increases for state employees in mid-2019 if the revenues are adequate at the end of this year…provide targeted raises to direct-care staff in state mental hospitals and other behavioral health facilities, while boosting pay for sheriff’s deputies and officers in corrections, juvenile justice and marine police…fund all 435 judgeships allowed by law, including 31 that had been eligible but not funded.” 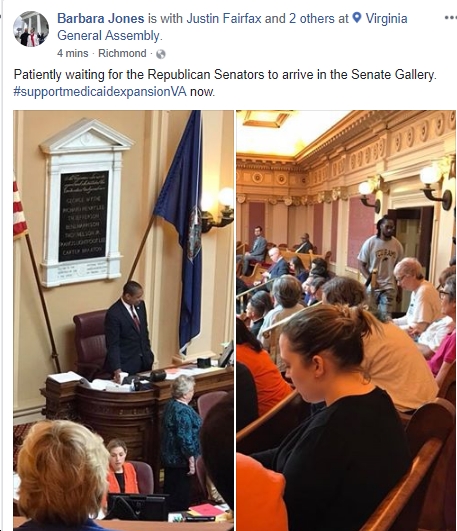