If I were Shelly Simonds (D), I’d be fundraising like crazy – today – over this bulls***. The entire situation was outrageous from the get-go, as Simonds beat incumbent Del. David Yancey by one vote in the recount, only to see that overturned, as “a judicial panel declared a tie, so officials picked a name out of a bowl to determine a winner, and it was Yancey.” Now, it gets even worse, as “a review of voter registration records and district maps by The Washington Post has found more than two dozen voters — enough to swing the outcome of that race — cast ballots in the wrong district, because of errors by local elections officials.” Which, in turn, would have put Democrats at 50-50 instead of 49-51 in the Virginia House of Delegates — a potentially huge, consequential difference. So yeah, if I were Shelly Simonds (and the House Dems), I’d be: a) super pissed; b) fundraising like mad off of this crap. 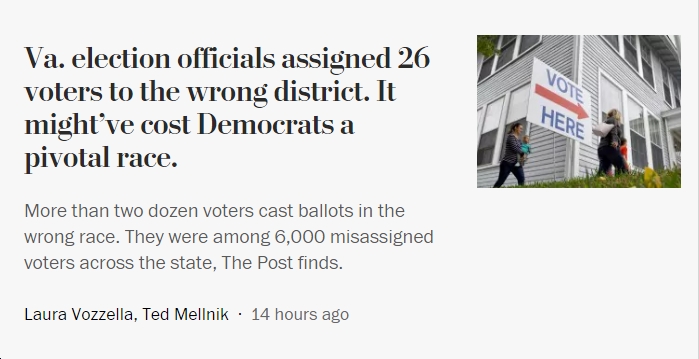