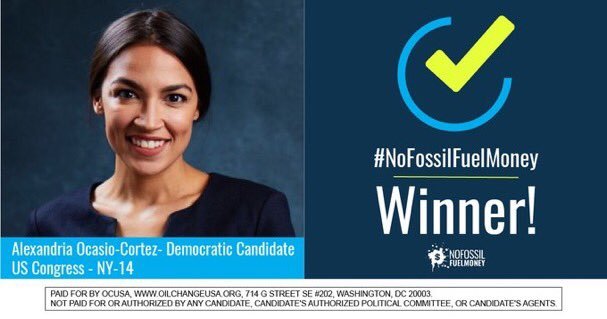 My political life, other than the unending outrage over the Trump kakistocracy outrages, is dominated by the need to #FlipThe10th — to get rid of #ExtremistComstock and do my part for adding one D to the House. With that in mind, it is hard with everything in life to be watching with detail races around the country. Now, I had sort of noticed Alexandria Ocasio-Cortez. I’d seen — and been impressed by — her campaign ad. But I didn’t have the money or energy to do much there and, thus, sort of ‘out-of-sight’, out of mind.

The only American politician I’ve ever seen with a climate change plan that is in line with intergenerational justice: @Ocasio2018.

And, I went to her issues page.

And, well, wow … So, it is rich … with lots of quality … and a freshman in the House won’t be able to pass everything but, well, her Mobilizing Against Climate Change is perhaps the most serious, most aggressive, and most interconnected three paragraphs that I have seen from a politician.

First off, let me say Alexandria has me on the title … we need, as communities, as nations, as humanity, to mobilize in action. That is World War II-like talk. And, that is what we require.

Yes … and yes … and, these are aggressive goals that are, however, potentially achievable if we “mobilize”.

She believes renewable fuels must be produced in a way that achieves our environmental and energy security goals, so we can move beyond oil responsibly in the fight against climate change. By encouraging the electrification of vehicles, sustainable home heating, distributed rooftop solar generation, and the conversion of the power grid to zero-emissions energy sources, Alexandria believes we can be 100% free of fossil fuels by 2035.

“100% free of fossil fuels by 2035” is an aggressive objective … and, well, even if we mobilize, we might not achieve it … but having that goal and mobilizing to achieve it would mean that we would be well on our way by that time.

Furthermore, Alex believes in recognizing the relationship between economic stability and environmental sustainability.

Yes … YES … YES!!! We would all be better off with this truism embedded in our politics and our lives.

It’s time to shift course and implement a Green New Deal – a transformation that implements structural changes to our political and financial systems in order to alter the trajectory of our environment. Right now, the economy is controlled by big corporations whose profits are dependent on the continuation of climate change. This arrangement benefits few, but comes at the detriment of our planet and all its inhabitants. Its effects are life-threatening, and are especially already felt by low-income communities, both in the U.S. and globally. Even in NY-14, areas like Throgs Neck, College Point, and City Island are being affected by erosion and rising sea levels. Rather than continue a dependency on this system that posits climate change as inherent to economic life, the Green New Deal believes that radically addressing climate change is a potential path towards a more equitable economy with increased employment and widespread financial security for all.

As someone somewhat weaned on this intellectually by people like Van Jones and Majora Carter, a “Green New Deal” is a path to offer real improvement to lives, to help address economic inequality, and move us toward actual policy to #ActOnClimate.

This is certainly true in the mid and long term — at the moment, it is clear that @RealDonaldTrump and his @GOP collaborators are a bigger threat.

But, in the mid and long term, unchecked climate change is an existential threat to the Republic and modern civilization.

and the single biggest threat to worldwide industrialized civilization, and the effects of warming can be hard to predict and self-reinforcing. We need to avoid a worldwide refugee crisis by waging a war for climate justice through the mobilization of our population and our government. This starts with the United States being a leader on the actions we take both globally and locally.

After reading this paragraphs, I have to say that I agree fully with Holthaus:

a climate-change plan in line with intergenerational justice.

NOTE: We should celebrate and thank Joe Crowley for immediately stepping forward to endorse the victor:

I want to congratulate @Ocasio2018. I look forward to supporting her and all Democrats this November. The Trump administration is a threat to everything we stand for here in Queens and the Bronx, and if we don’t win back the House this November, we will lose the nation we love.

Now @JoeCrowleyNY is playing guitar. He dedicated the first song to @Ocasio2018 — “Born to Run”
@ pic.twitter.com/U3sx6mth90

From Virginia, we call this “to be like Tom”:

In #Virginia and across the nations, all @TheDemocrats candidates must commit to be @TomPerriello if they lose a primary.

Thursday News: “The Saudis Keep Picking Sides, and It Never Seems to be Ours”; “Behold the Republican Trove of Truly Terrible Candidates.”; “Jan. 6...