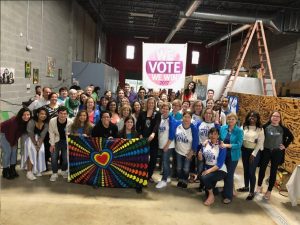 If you missed the inaugural Women’s Summit and are wondering why some women in your life are still raving about it, a year later, you can find out for yourself on June 22-24 when hundreds of grassroots activists gather for a much anticipated and expanded reunion at the Hyatt Regency Dulles.

Here’s my story of how the 2017 Women’s Summit pulled me into civic activism and changed how I view what’s possible in politics.

I got the tip about the summit at the last minute on Facebook by one very determined organizer, Stair Calhoun.  The invitation to attend was utterly random and a little strange. I thought I was actually chatting with her daughter, who I remembered from high school. But no, this very friendly, insistent woman I didn’t know seemed to really care that a political nobody like me show up to this thing.

I hesitated. I have always avoided being a joiner. I’m shy, stuttering and uncomfortable in large groups and I wasn’t really sure what the point was in hanging out all day with a bunch of women I didn’t know for causes I didn’t understand. I knew I would be voting later that fall, so what was this all about?

Nevertheless, I reminded myself, that unlike a lot of other self-actualized Virginians, I hadn’t really done my part to stop the Trump Train from crashing the White House; and I was looking for something  I could put my restless energy into.

I knew I had to get around learning how to participate more in politics, because it was obvious from the year before that the extent of my involvement up until then, showing up to vote, clearly wasn’t going to cut it anymore. If regular people like me continue to be uncomfortable around egos and money and dominating men, then how were we ever going to change politics as we know it? And who was going to show up to lead to do all the things I had always taken for granted would be honored and preserved: you know, old-fashioned things, like democracy, the rule of law, and knowledgeable, calm, tolerant people being elected to higher office.

So, in a rare instance of curiosity overcoming social anxiety, I took the day off from my weekend retail job; and went.

The phrase “it changed my life” is thrown around so casually by everybody these days – but it’s true. Seeing nearly the entire array of Democratic candidates for the House of Delegates – and the breathtaking realization that many of these inspiring speakers were young, non-white, women, and new to running for state-level office: that was the light bulb moment.

I remember Elizabeth Guzman grabbing the microphone and gleefully telling the crowd that she was a “Nasty Woman” – and the room erupting into cheers. Danica Roem flipping around her fantastic bountiful hair as she spoke more passionately about transportation improvements and gender identity tolerance than anyone I had ever heard in Virginia.  I was just getting over the shock of seeing Roem, a journalist, when another journalist-turned-candidate spoke, a charming, funny and policy-driven young guy named Chris Hurst. And Lee Carter’s forceful delivery. And Flo Ketner’s energy. And Kathy Tran’s resolve. And Hala Ayala’s passion. And Jennifer Carroll Foy’s courage.

At lunch I sat next to a down-to-earth, engaging woman, Michele Edwards, who said she was running against Dickie Bell in District 20. In the afternoon I got the chance to meet the iron-willed, fast-talking, sharp-as-a-tack iconoclast Linda Perriello, who quickly made me understand I needed to get around to learning something about the gerrymandering crisis in Virginia, and a myriad of other urgent issues.

I was hooked – who WERE these people? Where did they come from? Where had they been, all my (non-political) life? Surely something big was hitting Virginia politics that I had never thought possible – these magnetic, smart, funny, capable professionals (mostly women) were stepping up to change Virginia and they didn’t care how new or different they looked and sounded. And, it seemed, the Democratic incumbents sharing the stage with them were as taken by these fresh audacious outsiders as the rest of us.

These were the now-famous first-time candidates to the Virginia House of Delegates. You wouldn’t know from their drive, compelling personal stories, personable communication style, and their laudatory professional and educational backgrounds, that this was new to them too, and they were learning as they went.

This was not politics the way I was used to – coming from the safe and dull, white, well-funded men who had climbed the party ranks, kissed all the right rings, attended the right schools or fundraising parties, married the right people and been anointed by insiders I didn’t know and couldn’t relate to. This was politics I could intuitively get and sign up for, even though I knew about as much about political participation as a pre-teen learning to drive a car.

In a flash some of my front-of-mind fears about the upswing in racism and sexism and the constant daily attacks on the federal government and the Constitution could recede for a bit. These local leaders in my own state were fighting back – for health care rights, and human rights, and political campaigns not dependent on entrenched party loyalties and corporate dollars to stand a chance of winning. This would be serious, difficult work but I believed in these people. I decided to quit my weekend job and take up politics as my new hobby. I was all-in.

As I look forward to the second Women’s Summit, and the chance to meet all the great people running for Congress this year, I admit some misgivings. I am not necessarily expecting the same degree of magic, awe and hope this year as was palpably present during those first raw months of the Trump era.

Congressional races don’t have the same kind of neighbor-to-neighbor intimacy as state-level races; voters will be meeting their candidates more often from TV ads paid for by dark money and wealthy donors than I care to think about. Several of this year’s races don’t lack for excitement, but many candidates are less diverse than 2017 and they’re up against long odds.

When I shared these doubts recently with Stair Calhoun, she re-assured me that my skepticism is unfounded:  unified coalitions are working closer with more coordination now, she tells me, and are more inclusive than ever; NextGen Virginia is sponsoring many young activists’ attendance; Emily’s List is training female candidates for free, so women will be leaving the Summit ready to run; and I’m sure I’ll meet new people and learn new issues I wouldn’t have otherwise.

I can attest that the best way to learn about how to be politically engaged is by connecting with other people who are as passionate about activating citizens, pushing good policy, and advancing good people into office as you are.

So that’s my pitch for attending the Women’s Summit. Hope to see you there!