For anyone who (idiotically) thinks that voting doesn’t matter (spoiler alert IT DOES! as does getting even more involved, as I started to do after 2000, and particularly starting in 2003), check out the infuriating, fist-pounding stats, below, courtesy of this morning’s Axios AM by Mike Allen. In particular, note that sentence I highlighted: “Perhaps even more important for the long run, a young liberal Supreme Court might have ruled on America for a generation.”

I was thinking this morning about what would have happened if more Dems had showed up and Al Gore had won in 2000, instead of George W. Bush (who got a big assist from…yep, Anthony Kennedy!). If Gore had served two terms, we would have two liberal justices on the Supreme Court right now, instead of John Roberts and Samuel Alito. And if Hillary Clinton had won in 2016, we’d now have Merrick Garland instead of Neil Gorsuch, and soon another liberal justice instead of whatever far-right abomination Trump et al ram through now. The score? Instead of a 5-4, right-wing Supreme Court majority, we would most likely have a 7-2 or 8-1, progressive Supreme Court majority. Which would mean that whatever you care most about – Roe v Wade, environmental protection, union/labor rights, civil rights, voting rights, reining in corporate power, the strength of our democracy, protecting us all from gun violence, etc – we’d be in great shape right now – and for MANY years, if not decades, to come. Instead, because (tens of) millions of Democrats stayed home and didn’t vote (let alone get more involved as activists) in 2000, 2004, 2010, 2014 and 2016, we are…uh…clearly NOT in great shape.

Just think about that the next time someone says “voting doesn’t matter,” “the parties are totally the same,” blah blah blah. (P.S. Note that this is illustrative, as of course it’s possible that if Gore had served two terms as president, Dems MIGHT have lost in 2008, and things would have played out differently in general. But the main point holds, that it’s ABSOLUTELY CRUCIAL for Democrats – and every person of good will in this country – to vote in EVERY SINGLE ELECTION, no excuses!) 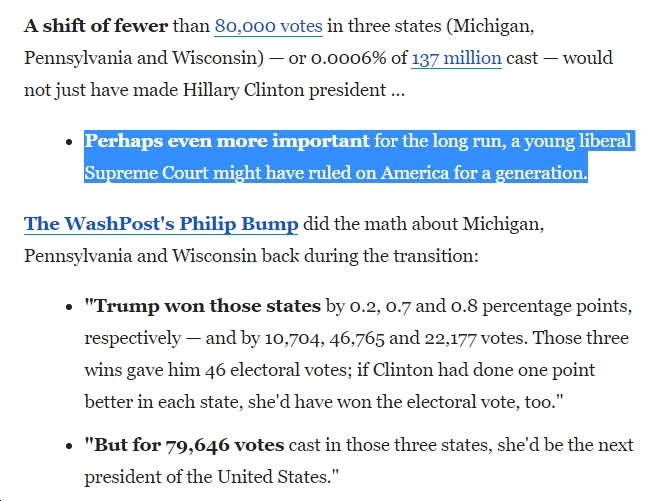