It was a pretty early night for the Wexton campaign gathered at O”Faolains Irish Pub in Sterling. As soon as the Loudoun County results came in, the crowd began chanting “Jen-ni-fer!” Jennifer Wexton’s endorsers were all there, including Senator McPike, Delegates Keam, Filler-Corn, Murphy, Bell, Simon, Ayala, and Congressman Connolly. When Senator Kaine dropped in for a surprise visit, the crowd was ecstatic. (Who his challenger would be was still unknown when he arrived, although by the time he left, we all knew it would be Corey Stewart.) 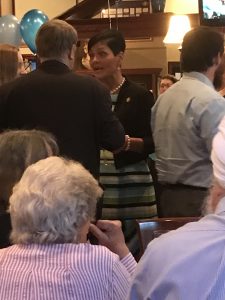 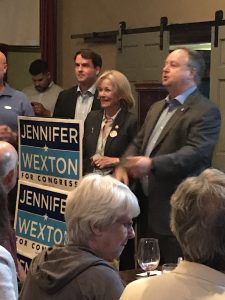 Jennifer spoke briefly, thanking the five other candidates. But she grew teary-eyed when she turned to her mom to thank her. She said “Thank you, Mom, for raising strong, independent women,” before turning to her husband, in turn, and thanking him for “putting up with a strong independent woman.” Thus continues the “Year of the Women” into a second election season. Just as women defeated men in nearly every Democratic primary in 2017, the same would hold tonight. 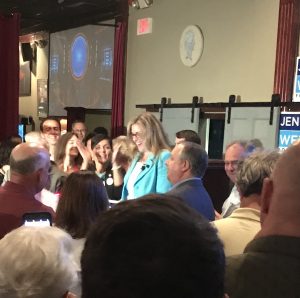