John Fredericks is broadcasting from the VA-05 nomination meeting today; click here for the live stream, assuming it happens. Also, see below for updates as I see them. Should be fun, as the following candidates vie for a majority (19 votes – a majority of the 37 delegates) of the hard-right GOP party insiders who will pick the replacement for Rep. Tom Garrett (R), who is not seeking reelection due to alcoholism, etc.

UPDATE 2:54 pm: FINAL VOTE – Riggleman somehow “riggles” to the win after everyone said Dunbar would win. WTF???  (Note: John Fredericks wrong yet again!) So much for champagne at Cockburn for Congress HQ this afternoon. Still, I think this race is a tossup – or maybe 55%-60% chance for Republicans – at this point.  Ben “Not Larry Sabato” Tribbett says  it’s “Leans Republican.”

UPDATE 2:41 pm: Round #4 of voting begins. John Fredericks says “all the Dunbar people look happy” and keeps predicting that Dunbar will be the nominee. Let’s see if he’s right this time.

UPDATE 2:22 pm: Voting now happening on whether to allow for speeches before round #4. Required a 2/3 vote, didn’t quite make it, so now speeches.  Bottom line, this appears to be coming down to Del Rosso as “kingmaker” for this nomination.

UPDATE 2:16 pm: Results from Round #3 are Dunbar 16 votes Riggleman 15 votes; Del Rosso eliminated (with 6 votes). John Fredericks saying that the “demeanor” in the Dunbar camp is very upbeat now, that they think they’ve got this now. Dunbar just needs 3 of Del Rosso’s 6 votes for the nomination. Go Dunbar! 🙂

UPDATE 2:10 pm: Lots of discussion about the petty, internal VA-05 GOP personality b.s., etc., that might determine this nomination. Ben Tribbett says “this is common, I don’t think this is unusual at all,” and that this is why it’s so dangerous to have nominations determined by party committees and not voters. Going from “dream to dumpster fire back to dream again?”

UPDATE 2:04 pm: Ben Tribbett says Riggleman could drop out and throw it to Del Rosso to stop Dunbar, that if Dunbar wins the nomination, the seat goes Democratic in November.

UPDATE 1:58 pm: Finally, third round of voting about to begin. Discussion on the John Fredericks Show about Del Rosso’s voters going to Dunbar assuming he finishes third in this round. Tea Party/Republican activist Ron Hedlund says if Del Rosso falls out after this round, then Dunbar will win.

UPDATE 1:46 pm: @RollinReisinger “Double standard: #VA05 chair allows pro-Dunbar speaker to attack one candidate and entire ‘establishment’ wing of the party, minutes after another chair was asked to only speak ‘for’ a candidate.” John Fredericks is now predicting that Riggleman will be the nominee, which of course means…he won’t be? LOL

UPDATE 1:27 pm: @RollinReisinger “Albemarle Unit Chair George Urban makes an impassioned speech to nominate someone who lives in the district and is ‘known to the voters’…The #VA05 chair prohibited speaking against specific candidates to protect Cynthia Dunbar from criticism. Only allowing speaking for candidates. Going to be very difficult to properly vet a nominee when people can’t speak frankly. The Democrats will in the fall.”

UPDATE 1:11 pm: @RollinReisinger “Fifth District Chairman now addressing accusations of impropriety and rules allegedly tilted for one candidate. Sure we will see more specifics behind the charges by the time the day is over…Motion before the committee to dispense with speeches and move immediately to third ballot. Chairman taking roll call vote…Looks like it’s coming down to Dunbar and Riggleman…Motion for immediate third ballot defeated. Committee will entertain another round of speeches before next ballot.”

UPDATE 12:54 pm: Second round balloting FINALLY happening now. The Republicans on the John Fredericks Show are talking about how Dunbar is a “dumpster fire.” Love it; now just NOMINATE her!

UPDATE 12:36 pm: Speculation on the John Fredericks Show that this delay is hurting Dunbar, giving time for the RNC, etc. to make phone calls and convince people to nominate Riggleman instead of Dunbar.

UPDATE 12:25 pm: For some background on Dunbar as we wait, see Video: More Lunacy from Theocratic Extremist Republican Cynthia Dunbar in VA-06 and Right Wing Watch on Dunbar

UPDATE 12:12 pm: John Fredericks just said “this is a nightmare” for the Republican Party. Now, national GOP money is going to have to flow into VA-05 to try and save the seat.

UPDATE 12:08 pm: The DPVA Comms Director just said this is a “DREAM” for the Democratic Party, and the other panelists agreed. Ben Tribbett just said there is “absolutely no way” Dunbar can win VA-05, that Republicans just gave up this seat.

UPDATE 11:56 am: Ballots being counted now. 37 votes cast. Top four candidates were 15 votes for Dunbar, 6 votes for Joe Whited, 6 votes for Denver Riggleman, 5 votes for Michael Del Rosso. Wow, Webert and Boneta eliminated; likely nominee is bats***-crazy, possibly unelectable, theocratic extremist Cynthia Dunbar! LOL. Party over at Leslie Cockburn for Congress HQ? 🙂  By the way, note that John Fredericks was wildly wrong yet again (in 2013, he guaranteed over and over again that EW Jackson would NOT win; this year, he was sure that Martha Boneta was a top contender, along with Riggleman and Stanley – NOT!!!).

Counting ballots in #VA05. First round of voting. pic.twitter.com/FAWPfHKSLx

UPDATE 11:54 am: RollinReisinger “Electors proceed to front of auditorium. Voting by secret ballot. On first ballot, top four will advance. Majority to win, not plurality.”

UPDATE 11:50 am: Leslie Cockburn’s campaign just sent out an email, “Today, Republican party officials are planning to handpick their nominee to represent our district in Congress. Many people are vying for the opportunity. Regardless of who they choose, one thing is certain: we won’t be stopped.”

UPDATE 11:34 am: Del. Michael Webert a bit hard to hear because he’s walking around and the audio sucks. Talks about his family and his work as a delegate. Says he’s stood for years and protected the 2nd amendment (e.g., “concealed carry reciprocity”). “How many of you love big government?” Vows to make government smaller, “decrease the regulatory burden.” Says he’s running to take the same approach he’s had in the House of Delegates to the federal level. Zzzzzz.

UPDATE 11:29 am: Michael Del Rosso says this country is in the middle of “essentially a coup d’etat.” WTF? “They didn’t want to have Hillary Clinton lose.” (This guy is completely bonkers)  “This is more than just a district race…the left is going to nationalize this…this race has national portent and they are waging a sophisticated political battle against us…”  Says nobody called out the “hard left” after Cville, says Occupy, Black Lives Matter, Antifa, etc. are today’s equivalent of the KKK. As I said, completely bonkers. Says Cockburn “drank a lot of progressive Kool-Aid.” Says he debated Tom Perriello on the Rob Schilling Show and won “handily.” Something about the “deep state.” Vows to advance Trump’s agenda, combat the “deep state,” “restore liberty.”

UPDATE 11:24 am: Denver Riggleman says he’s been attacked by “regulatory agencies.” “It’s about keeping our money.” “I have no talking points but I do know a little bit about policy.” Says he served our country for 26 years. “I need your help.” Says he knows about immigration, “extreme vetting.” Touts Trump tax cuts. Talks about his experience as a businessman. Senior consultant for Secretary of Defense. “I like to talk…also like to listen.” “Planned Parenthood will never be funded on my watch.” Something about “Red Rover,” not sure what that meant exactly.

UPDATE 11:18 am: Bat****-crazy Cynthia Dunbar, fresh off of getting crushed for the VA-06 GOP nomination, speaking now. Says she is a humble servant of Jesus Christ. Says many people have asked her to run to help “save our nation.” “Strong advocate for both 1st and 2nd amendment rights” and for shrinking government by “actually upholding our constitution.” Says she is ready to “hit the ground running” and a fundraising apparatus already in place. Cites endorsements by Ted Cruz, Ron Paul, Susan B. Anthony List, etc. Says she has campaign ready to roll. Railing against “socialism” and for “liberty.” “We have lost our way” and need to regain it. Says government is “force,” government should “fear the people.” Says love is stronger than hate.

UPDATE 11:13 am: Joe Whited speaking. “Grew up on a cattle farm.” “I understand the needs of our rural communities” from doing the work himself. “I understand the threats our nation faces…as a member of the United States Navy and a civil servant,” in Afghanistan and Iraq.  “All of us up here today are good conservatives.” Need to send someone to Washington who does NOT need “on-the-job training,” says he will be “ready on day one” – unlike his opponents – and can get stuff done for the district. Vows to deliver victory in November.

UPDATE 11:07 am: Martha Boneta speaking now, ranting at “radical, extreme, elite swampmongers who wanted to steal my farm.” LOL, alrighty. But fortunately, “we were able to crush them…they chose the wrong Christian, pro-life…fighter…to bully.” “We stood up for property rights…and we won.” “There is no freedom when…we have to beg for our rights and our freedom that come from our Lord.” “I stood by President Donald J. Trump…when so many fled…I will continue to fight in Congress to make America First always.” Brags about holding town halls with Pence and Trump, helping “advance President Trump’s vision for America.” “The liberal elites, the media, Hollywood, they hate our president…I am proud to support Donald J. Trump…I will stand against the San Francisco liberal Nancy Pelosi.” Most important decision of her life was to accept “the Lord Jesus Christ as my savior.” “I am passionately pro life…unshakable in my conviction.” “Just three weeks ago I stood in Jerusalem…I will stand in support of our nation’s best friend…Israel.” “I am Leslie Cockburn’s greatest enemy…they know I will destroy them.” Unhinged.

UPDATE 11:03 am: Sen. Bill Stanley said his 6 year old “started to cry” about the thought of his father having to be in Washington, DC much of the year. Also says he can do a lot of good and for the area in the State Senate, and that “I’m not built for Congress.” He adds that he is going to run for either AG or Governor in 2021.

UPDATE 10:58 am: They’re now talking about ethics, conflicts of interests, full disclosure, etc. “@RollinReisinger Fifth District Committee offers warning against conflicts of interest. Repeats requirement for written disclosure as found in Party Plan. This has been an issue before. Now exacerbated by Dunbar’s move from #VA06 to #VA05”

UPDATE 10:48 am: The John Fredericks folks are now debating whether Martha Boneta has a shot, or whether it’s Cynthia Dunbar vs. Denver Riggleman.

UPDATE 10:43 am: Sen. Bill Stanley drops out, knowing he didn’t have the votes! 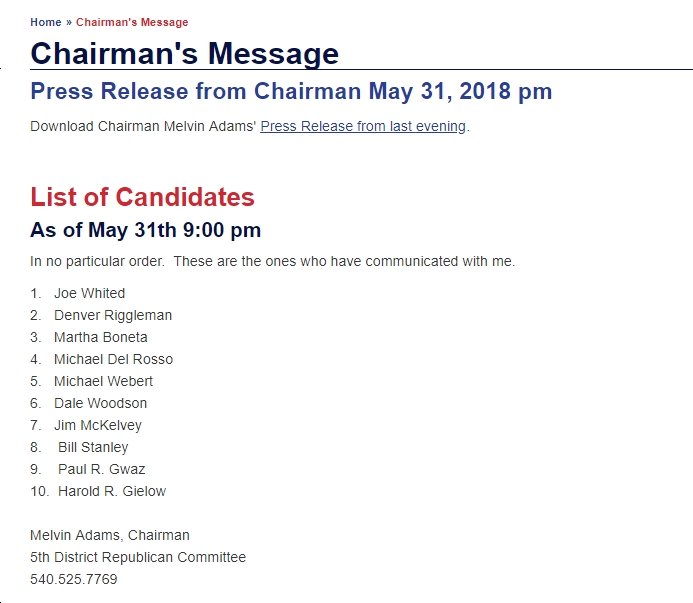 Congressman @GarrettforVA addressing the Fifth District and thanking them for their support. Garrett announces his neutrality in picking a successor. pic.twitter.com/rHx19Arjp7

The #VA05 meeting to nominate Tom Garrett’s successor has been called to order. pic.twitter.com/wWnyXDlSbR